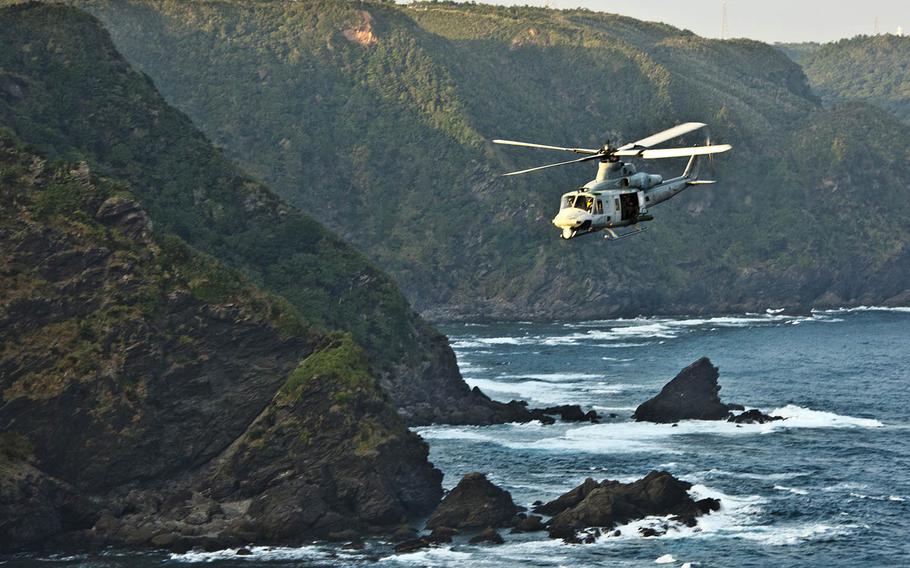 CAMP FOSTER, Okinawa — The latest battle between Tokyo and Okinawa over a new U.S. military runway to one day facilitate the relocation and closure of Marine Corps Air Station Futenma has taken another step toward a legal showdown.

The Okinawa Defense Bureau — representing Japan’s Ministry of Defense on the island — requested an official examination Wednesday of a landfill permit revocation made by local officials on Aug. 30, an ODB spokesman.

The examination will be conducted by Japan’s Ministry of Land, Infrastructure, Transport and Tourism under the country’s Administrative Complaint Review Act.

If the agency sides with Tokyo and Okinawan officials then decline to cancel the permit revocation, Japan’s central government will likely be forced to take the prefectural government to court to overturn the action.

“The bottom line regarding the relocation to Henoko is to remove the danger of Marine Corps Air Station Futenma from the crowded area surrounded by schools and residential areas,” recently appointed Defense Minister Takeshi Iwaya told reporters Wednesday. He called Futenma “the most dangerous air base in the world” and said he would like to return the land to Okinawa “as soon as possible.”

“The act should only be applied to protect the right of an individual, not a government entity,” Tamaki said, according to the Okinawa Times newspaper. “This is an illegal action to twist the system.”

A Tamaki spokesman told Stars and Stripes on Thursday the new governor hopes to resolve the matter through discussion, not by legal battle.

Landfill permitting for the runway into Oura Bay at the U.S. Marine base Camp Schwab in Henoko was revoked by the previous administration because of environmental concerns.

It’s the third time Okinawa officials have either revoked permitting for the project or sued to stop it. It is largely seen as a last-ditch effort after two previous attempts were struck down in Japanese courts.

Tamaki – the son of a Japanese mother and a U.S. Marine – was elected Sept. 30 after defeating Atsushi Sakima, who was backed by Prime Minister Shinzo Abe, by about 80,000 votes.

Tamaki ran as the heir apparent to former Gov. Takeshi Onaga, who had long opposed the relocation of Marine air operations within Okinawa prefecture and tried everything in his power to halt the move to Schwab before dying of pancreatic cancer on Aug. 8.

Relocating Marine air operations from the dense urban area of Futenma is more than 20 years in the making because of safety concerns over frequent overhead flight operations.

The plan to build a runway into Oura Bay at Camp Schwab in Henoko was decided during bilateral negotiations in 2006. Then-Okinawa Gov. Hirokazu Nakaima signed off on a permit to allow the landfill work in 2013 and construction began in August 2014.

However, Onaga’s November 2014 election threatened to derail the project. He ran on a platform vowing to stop the relocation and eject the MV-22 Osprey from the island.

Onaga revoked a permit to fill in the sea for the runway in March 2016, which halted construction. That move was struck down by the Fukuoka High Court in December 2016.

He filed a district court lawsuit in July 2017, which ended unsuccessfully in March.

Plans were made to start construction on the runway on Aug. 17. Onaga then vowed one final permit revocation but died suddenly before he could follow through.

The central government postponed the landfill work in the wake of his death. The permit was ultimately revoked by Onaga’s vice-governors who took over until the election.