Bases in Korea were ready to accept U.S. evacuees from Japan 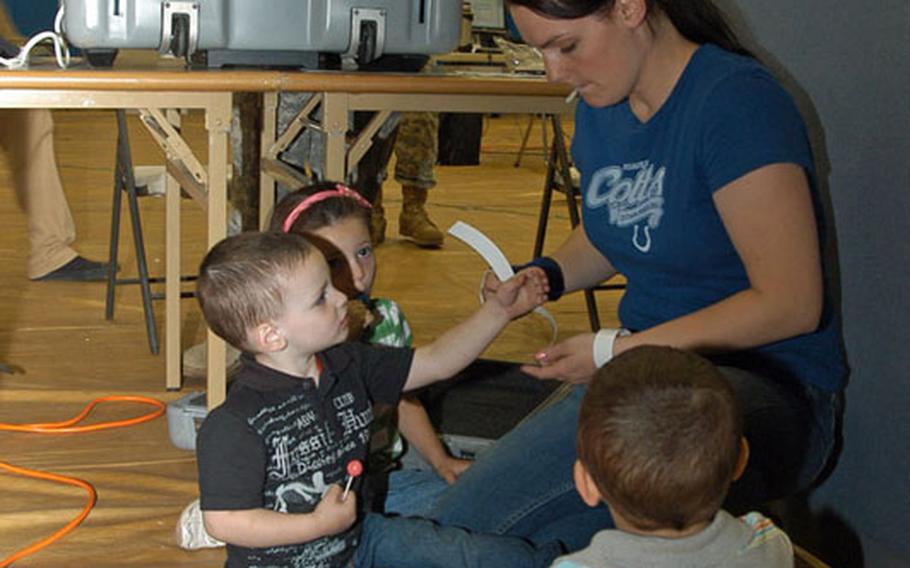 Buy Photo
Lauren Gasper, right, puts a noncombatant evacuation operation tracking bracelet on the wrist of her son Connor, 2, as her other children, Harmony, 4, and Christian, 3, look on Thursday. The family was going through the Courageous Channel evacuation exercise at Camp Red Cloud in South Korea. (Jon Rabiroff/Stars and Stripes)

Buy Photo
Lauren Gasper, right, puts a noncombatant evacuation operation tracking bracelet on the wrist of her son Connor, 2, as her other children, Harmony, 4, and Christian, 3, look on Thursday. The family was going through the Courageous Channel evacuation exercise at Camp Red Cloud in South Korea. (Jon Rabiroff/Stars and Stripes) 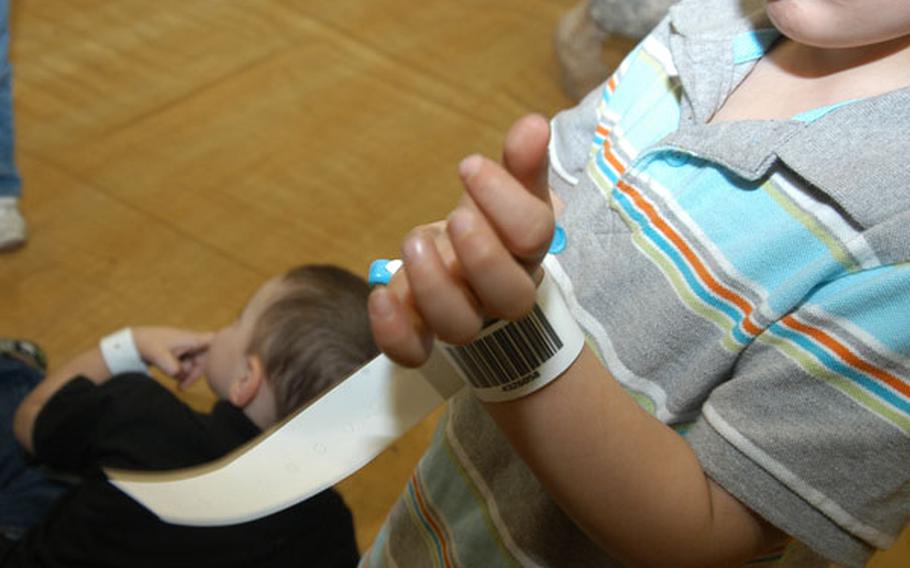 Buy Photo
Three-year-old Christian Gasper shows off a noncombatant evacuation operation tracking bracelet put on his wrist during an evacuation exercise Thursday at Camp Red Cloud is South Korea. The bracelets would be used to track the progress of evacuees as they are moved off the peninsula in the event of an evacuation prompted by a North Korean attack. (Jon Rabiroff/Stars and Stripes) 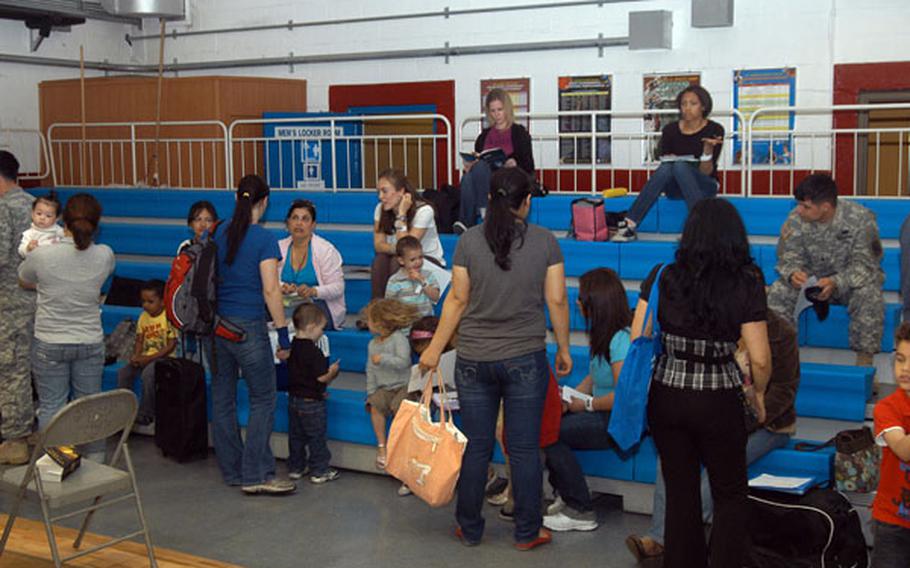 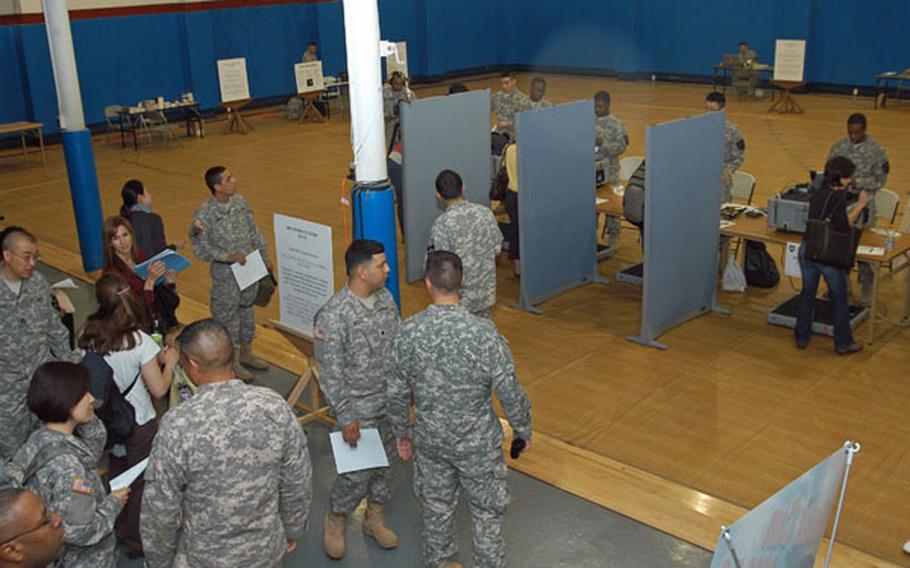 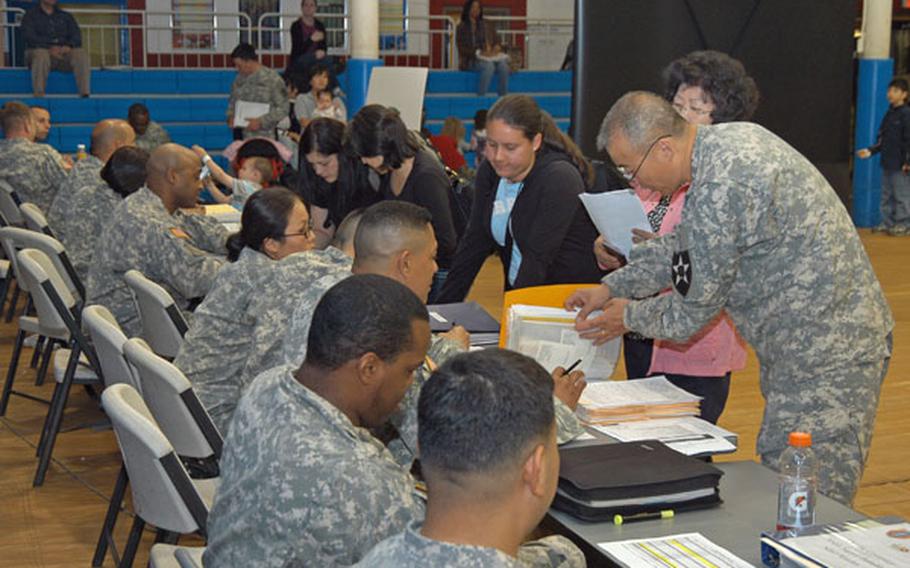 Buy Photo
U.S. military dependents are processed through a variety of stations during the Courageous Channel evacuation exercise Thursday at Camp Red Cloud in South Korea. (Jon Rabiroff/Stars and Stripes) 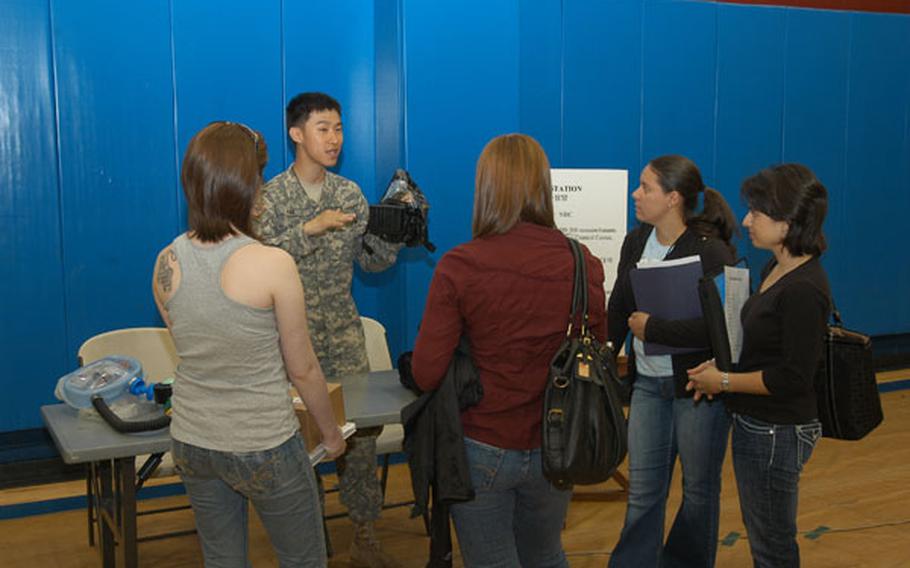 SEOUL &mdash; The U.S. military in South Korea scrambled to accept thousands of U.S. family members from Japan in March after a radiation scare prompted the Defense Department to authorize their exodus out of the tsunami-ravaged country, U.S. officials have acknowledged for the first time.

Even though the family members never actually ended up in South Korea, officials here said that lessons from that real-world experience will serve them well should they ever have to evacuate the peninsula, as will the lessons learned from this week&rsquo;s annual noncombatant evacuation operation, known as Courageous Channel. The exercise, also called NEO, is an effective way to prepare for the movement of as many as 200,000 Americans off the peninsula in the event of a North Korean attack, officials said.

But despite all of the work put in during this week&rsquo;s exercise, officials say it didn&rsquo;t give them as much hands-on training for an actual evacuation as they got when four U.S. bases in South Korea were readied to temporarily house up to 30,000 potential evacuees from Japan.

Ultimately, the approximately 10,000 military family members who opted to take advantage of a voluntary evacuation of Japan were flown directly to the U.S., without the need to stop at any of the South Korean &ldquo;relocation centers&rdquo; that had been prepared.

Officials said thousands of cots were set up, and preparations were made to hook up phone and Internet centers and distribute kits of hygiene products to an anticipated initial wave of as many as 5,000 evacuees.

&ldquo;They had all four bases set up to the minimum capacity, to get those going, and they had to be (prepared to be) at maximum capacity within 72 hours,&rdquo; said Maj. Donald Little, 8th Army public affairs plans officer. &ldquo;But, the need for us to expand to the maximum capacity &hellip; went away.&rdquo;

Officials declined to specify which bases were mobilized, but a high school student at Camp Humphreys recently recalled how, &ldquo;The whole gym was completely closed off. It was wall to wall with cots. They had telephone lines set up to accommodate everybody.&rdquo;

The experience, officials said, was invaluable because similar temporary housing would be set up in the event of an evacuation of South Korea for those awaiting transportation off the peninsula.

&ldquo;We don&rsquo;t even pantomime this during this (NEO) exercise,&rdquo; said Kim. &ldquo;For Courageous Channel, we only set up the evacuation control centers. We don&rsquo;t deal with setting up life-support areas. We do rehearse it annually &hellip; but actually executing it, this was the first time.

&ldquo;Obviously, it takes a lot of coordination through a lot of players,&rdquo; he said. &ldquo;We got to see how that synchronization needs to work in order to be successful. For about a week, we were ready. The whole ordeal was about two weeks. It took a lot of effort.&rdquo;

At the time the evacuation of Americans from Japan was being considered, U.S. Forces Korea officials were tight-lipped about what, if any, role they would play. And, after the fact, there was little or no mention of the preparation of the four potential evacuation centers in U.S. military publications and websites that routinely tout the efforts of servicemembers.

Plans &lsquo;validated&rsquo;Eighth Army officials said the March mobilization here, and the way the voluntary evacuation of Japan was handled, reinforced &mdash; rather than revised &mdash; most of what was on the books for the potential movement of Americans off the Korean peninsula.

&ldquo;We had a pretty detailed plan to begin with, and watching Japan didn&rsquo;t really change our plan,&rdquo; Buczkowski said. &ldquo;It gave us an opportunity to exercise certain portions of it, such as &hellip; the physical set-up of certain facilities. So, really, it just validated what we had been planning all along.&rdquo;

One lesson that was reaffirmed from the Japan evacuation was the importance of pets in the process.

&ldquo;Japan had some issues with pet evacuation and movement,&rdquo; Kim said. &ldquo;One of the things we learned from Japan is that dealing with the pets is very important. Pets are always a sensitive topic &hellip; because a lot of families think of them as family.&rdquo;

With that in mind, U.S. military families in South Korea were encouraged to bring their pets with them this week when they brought their NEO packets to be reviewed at one of the on-base evacuation control centers. Some veterinary services were made available as an incentive.

In addition, for the first time since Courageous Channel was started in 1996, volunteers with their dogs and cats in tow were scheduled to be flown by Chinook helicopters between Camp Red Cloud and Camp Humphreys in simulating how they would go through the entire evacuation process. Poor weather conditions canceled those flights, but one dog did get &ldquo;evacuated&rdquo; on one of three helicopters that took off and landed at Camp Humphreys on Thursday.

In past years, volunteers who simulated going through the entire evacuation process were, ironically, transported to Japan &mdash; something that was not done this year because of the ongoing relief efforts there.

&lsquo;Good to see there is a process&rsquo;For this week&rsquo;s Courageous Channel exercise, all Department of Defense-affiliated dependents were required to show up at evacuation control centers at various bases to have their NEO packets reviewed to make sure they have all the necessary paperwork to get them off the peninsula in the event of an emergency.

The exercise was voluntary for U.S. embassy personnel, DOD retirees, contractors, their families or any U.S. citizens with base access.

As part of the exercise, dependents were asked to bring along protective masks issued to every member of their family for inspection, and so they could be shown how to use them.

Officials dismissed the suggestion that the annual evacuation exercise might cause more fear than comfort, given that the stated reason for the event is potential aggression from North Korea, including a chemical or biological attack.

&ldquo;Almost everywhere you go, they have some kind of risk they have to train for,&rdquo; Little said. &ldquo;I don&rsquo;t really see how it&rsquo;s different from anywhere else &mdash; Oklahoma tornados, Florida hurricanes, Buffalo lake-effect snow or California earthquakes. I really don&rsquo;t think that it puts people really on edge all that much.&rdquo;

After taking her three young children through the evacuation control center set up at Camp Red Cloud in Uijeongbu on Thursday, Lauren Gasper expressed a sense of relief.

&ldquo;It&rsquo;s good to see there is a process in place, because we are very close to people that don&rsquo;t like us,&rdquo; she said. &ldquo;To know there&rsquo;s a way &hellip; to get us all out safe, it is comforting.&rdquo;

Stars and Stripes reporter Ashley Rowland contributed to this story.