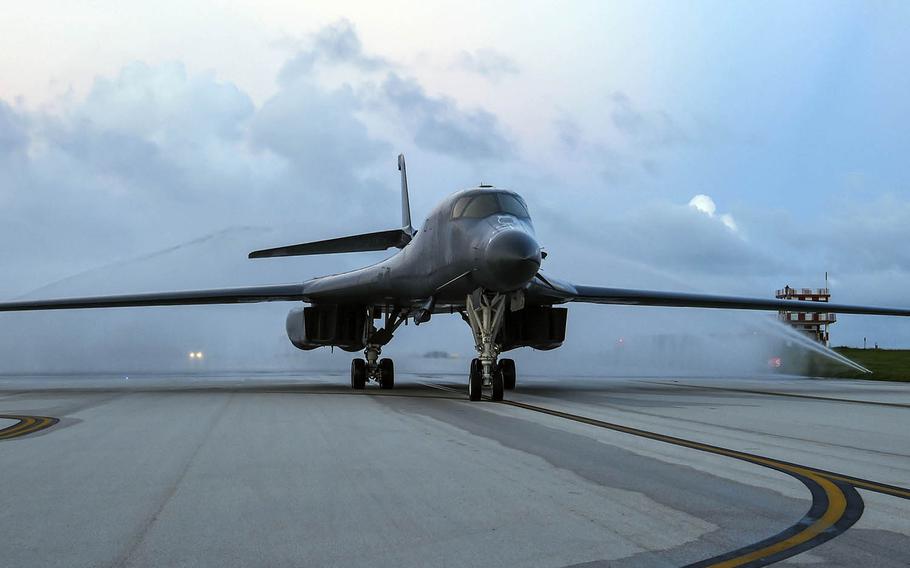 The bombers arrived Tuesday with 200 airmen from the 9th Expeditionary Bomb Squadron out of Dyess Air Force Base, Texas, and will train with joint forces and allies, according to a Pacific Air Forces statement Friday.

The deployment coincides with visits to Japan by Army Secretary Ryan McCarthy, who tweeted a photo of his welcome by Japanese troops Thursday, and Adm. Phil Davidson, the head of Indo-Pacific Command, which tweeted that he paid a courtesy call Friday on Japanese Prime Minister Yoshihide Suga.

The bombers’ arrival precedes Monday’s kickoff of the Keen Sword exercise in Japan, which is scheduled to involve 46,000 U.S. and Japanese troops and numerous ships and aircraft. It’s unclear if the B-1Bs will take part in the drills.

Before arriving on Guam, the bombers teamed up with 16 F-15 Eagles and 2 F-2 Viper Zeros from the Japan Air Self-Defense Force over the Sea of Japan, the PACAF statement said. The water body is known in Korea as the East Sea.

“The training proved to be a very good opportunity to improve tactical skills as well as to show our commitment to the robust Japan-U.S. alliance and the region,” Lt. Col. Kobayashi Yoshiyuki, commander of the JASDF 305th Fighter Squadron, said in the statement.

The bombers also trained with the amphibious assault ship USS America in the western Pacific Ocean, according to PACAF.

“Our ultimate strength in the Indo-Pacific is … our ability to train and operate as one layered, capable, and credible combat team,” the America’s commander, Capt. Luke Frost, said in the statement. “Integrated air defense and sea control operations leveraging top-shelf capabilities of both the Navy and Air Force, like this, allow us to continually field a joint force ready to fight and win.”

The B-1Bs are performing a bomber task force mission that prepares airmen to operate anywhere in the world at a moment’s notice and gets them used to working in different regions, PACAF said.

The Air Force has changed its tactics to enable strategic bombers to operate from a broader array of locations to align with the National Defense Strategy’s objectives of strategic predictability and operational unpredictability, according to the statement.

“Every one of these operations is an opportunity for us to gain critical experience and become efficient in the deployment and execution processes,” said Lt. Col. Ryan Stallsworth, 9th Expeditionary Bomb Squadron commander. “The U.S. Air Force is willing to and capable of operating out of different strategic locations.”

Airmen and B-1B Lancers from Dyess last deployed to Guam in May in support of bomber task force operations.