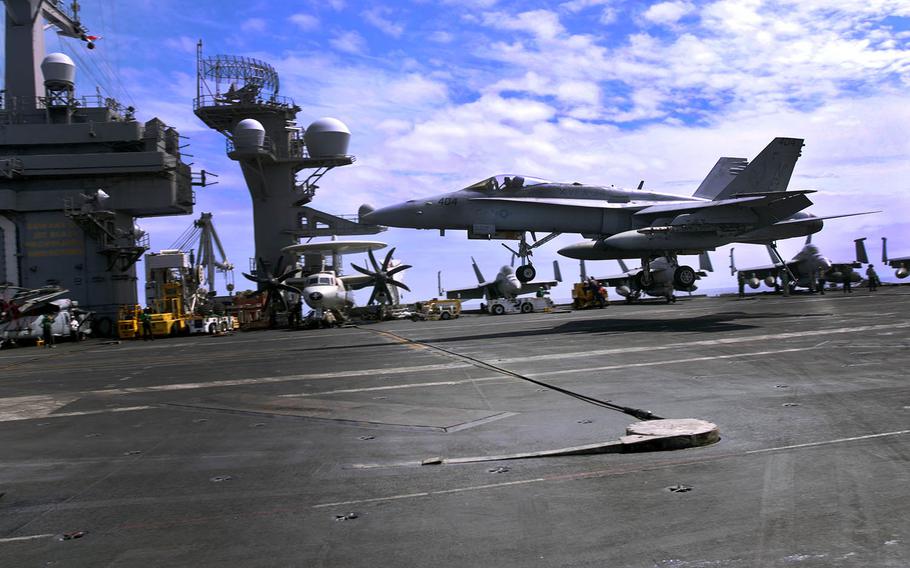 A Navy pilot lands a fighter jet aboard the USS Carl Vinson last month in the Philippine Sea. (Caitlin Doornbos/Stars and Stripes)

A Navy pilot lands a fighter jet aboard the USS Carl Vinson last month in the Philippine Sea. (Caitlin Doornbos/Stars and Stripes) 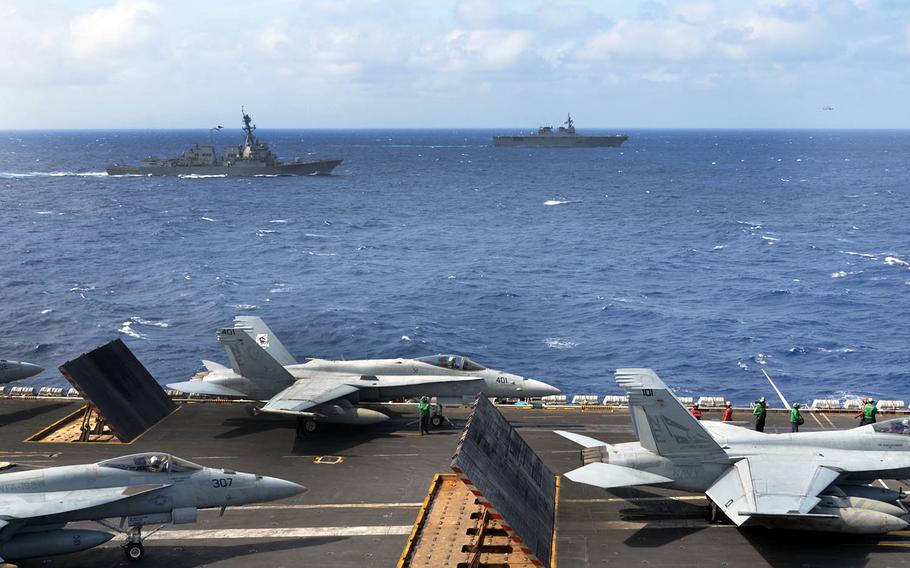 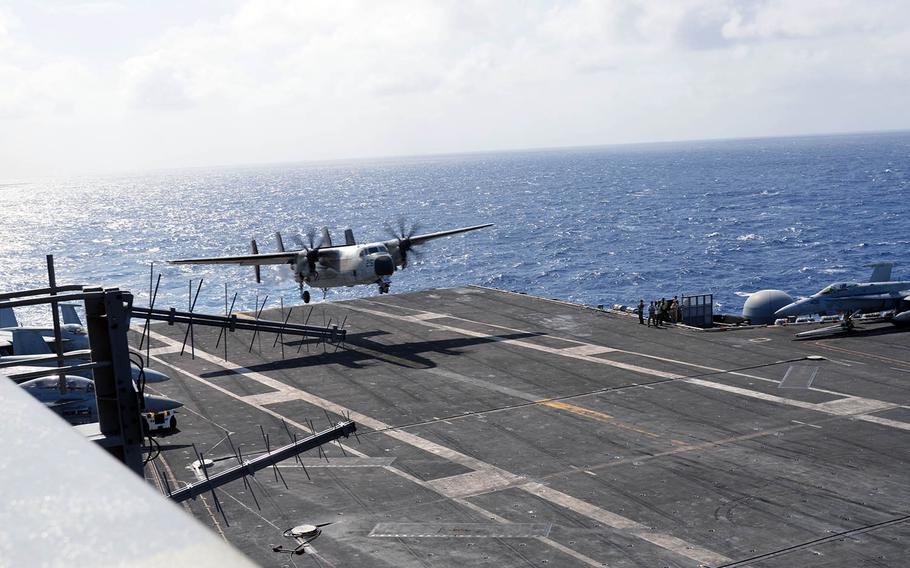 A C-2A Greyhound lands on the flight deck of the USS Carl Vinson last month in the Philippine Sea. (Caitlin Doornbos/Stars and Stripes) 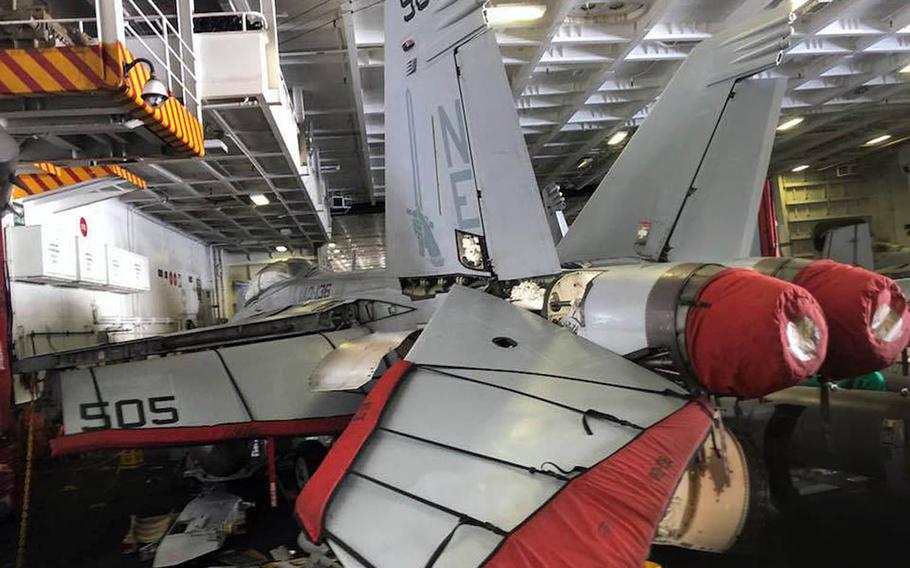 A Growler sits in the hanger bay of the USS Carl Vinson last month in the Philippine Sea. (Caitlin Doornbos/Stars and Stripes) 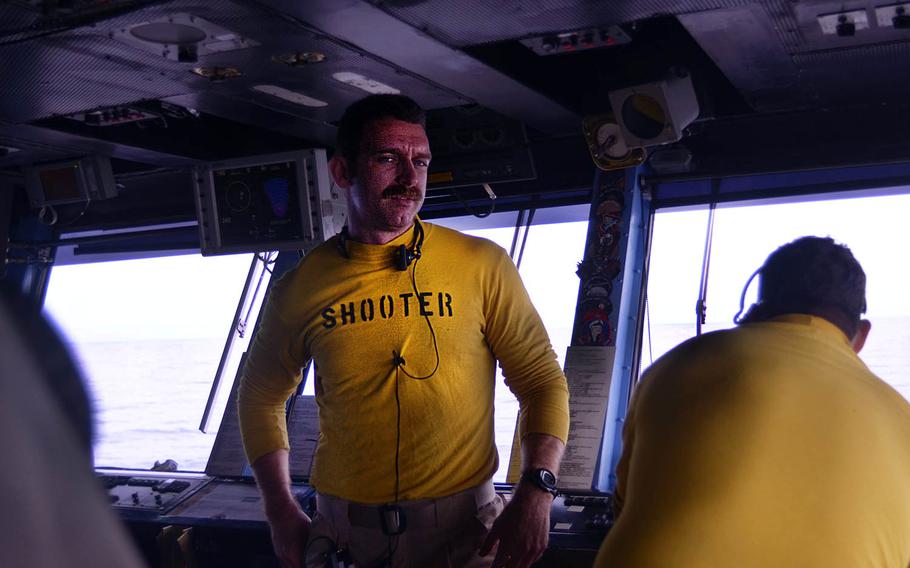 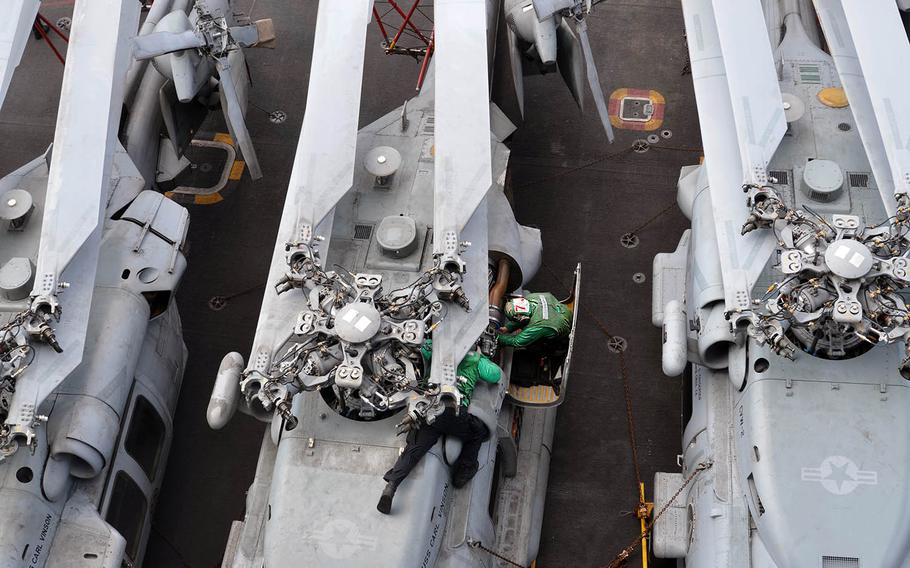 Sailors work on a Seahawk aboard the aircraft carrier USS Carl Vinson last month in the Philippine Sea. (Caitlin Doornbos/Stars and Stripes) 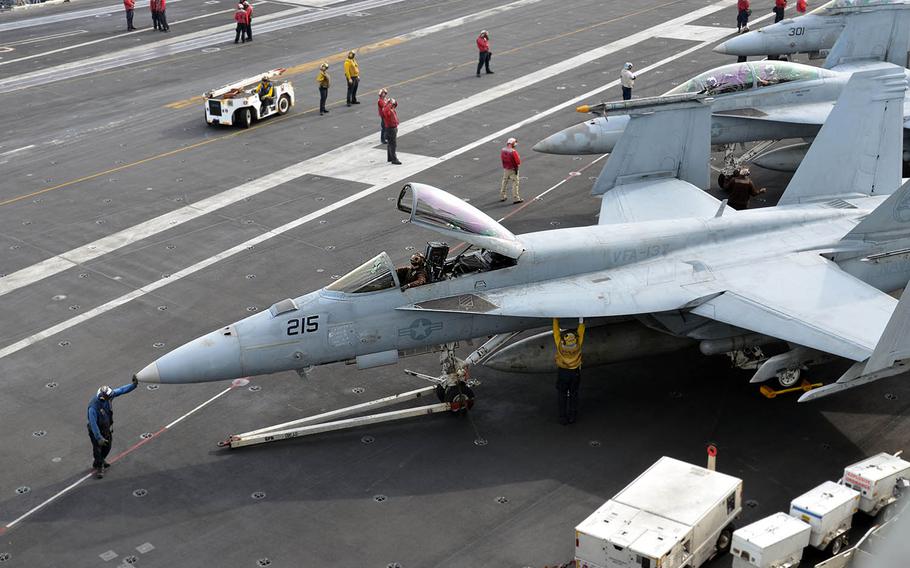 ABOARD THE USS CARL VINSON in the Philippine Sea — With the bone-rattling roar of a Super Hornet’s fiery red engines, three words came to mind: God bless America.

Watching the catapults of the aircraft carrier USS Carl Vinson fling fighter jet after fighter jet into the skies during drills last month over the Philippine Sea inspired more patriotism than the grandest of Independence Day fireworks.

A mishap extended what was meant to be a five-hour press tour of the Carl Vinson into 30 hours aboard Carrier Strike Group One’s flagship. A propeller on the C-2A Greyhound carrying 12 reporters was damaged during the flight from Okinawa and had to be repaired in the hangar bay.

The extra time provided a window into an average day at sea on the nuclear-powered warship.

In the air The media embark began on a March Friday morning when we climbed into the twin-engine Greyhound through its rear door. Our heads were squeezed tight by a cranial helmet with goggles and hearing protection. Chests were padded with life vests in case of what a crewmember called “the unlikely event of a water landing.” I strapped myself into my seat with belts pulled tight in a four-point harness around my shoulders and waist.

The plane showed signs of its decades of use. Wear and tear in the cabin included torn leather, dented metal and rust. The newest models were last delivered in 1990 — before I and many of the Carl Vinson sailors were born.

When the time came to land two hours later, we were cued with a “here we go!” from the crew and braced for impact. There was a loud thud as the plane hit the flight deck — but it didn’t stop. We’d missed the arrest cable and needed to circle to try again. My stomach turned.

Adding to my unease: My stepmother’s father was killed 50 years ago during a carrier landing. His A-3 Skywarrior snapped the arrest cable on the USS Shangri-La and fell into the Sea of Japan.

A second “here we go!” came minutes later, and the plane screeched to a halt from 120 mph. I was thrown back into my rear-facing seat — designed to accommodate abrupt landings — and groaned.

After stepping off the plane, we were rushed off the runway to the first of many staircases we would climb during our visit.

Several floors down, we were greeted by the scent of roast beef and potatoes. We choose a meal from a smorgasbord including chicken, fish, rice and salad fixings and sat down to eat. Sailors chatted, laughed and watched a Harrison Ford flick as they dined.

A well-oiled machine Back on the flight deck, we watched aircraft launch and land. Sailors dressed in a variety of colors moved quickly and methodically around dozens of planes, helicopters and jets. The colors designate the role each person plays in the mission. For example, those who work with aviation fuels wear purple.

A Hawkeye moved into position along a catapult track built into the flight deck. Its wings and tail planes unfolded as its propellers spun. After the thumbs-up cues from two sailors dressed in white crouching below both sides of the plane, a shooter in yellow launched the steam catapult that flung the aircraft to flying speed in about two seconds.

A few minutes later, sailors in yellow waved their arms to direct a Growler into the vacated space. Its engine roared and its pilot braced for takeoff as the crouching sailors gave another thumbs-up. Seconds later, the jet was airborne off the edge of the Carl Vinson as catapult steam danced across the runway.

Lt. Adam Pennington, a shooter on the Carl Vinson, called that pace “average,” and said they worked more than 100 launches that day.

After the last jet took off, the crew switched gears so that a group launched earlier in the day could land. The planes zoomed into position, their pilots perfectly aligning the tailhooks with the steel wire ropes strung across the deck before coming to an abrupt stop.

The complicated operation continued with ease as the sailors went about their business-as-usual routines.

But even after more than two months straight of near-daily flight operations, danger looms in sailors’ day-to-day jobs. With 5,000 people aboard the 95,000-ton vessel working in cramped spaces among massive machinery, aircraft and bombs, the chance of tragedy is always in mind, Pennington said.

“There’s a saying in the Navy: ‘If you’re feeling safe on a flight deck, you better turn around because you’re about to die,'” he said.

Should the worst happen, all hands must know what to do in case of an emergency.

The next morning, the carrier would practice “general quarters,” calling all sailors to man their battle stations and react to imaginary threats announced over loudspeakers.

For two hours, the voice announced scenarios, including reports of smoke on the ship and incoming torpedoes. Each sailor had a job, whether it was donning damage-control gear to pursue fires, sending fighter jets into the air or simply staying out of the way.

The Pacific Fleet knows the chance for catastrophe all too well. Last year, 17 sailors died in two separate destroyer collisions near Japan and Singapore. The Navy credited crew damage-control efforts for saving those ships and preventing more lives from being lost.

After dark It’s not all serious business aboard the Carl Vinson. Life for its 5,000 sailors must have balance and some sense of normalcy during deployments.

For some, that means cutting loose at night by singing karaoke in the mess hall. Several sailors stood before their peers that Friday night and crooned out tunes. Their camaraderie was nearly tangible. Each chorus was met with cheers. Without a drop of alcohol, these tough sailors relaxed and socialized at rows of tables reminiscent of a high school cafeteria.

One sailor belted out a moving rendition of Zac Brown Band’s “Colder Weather,” about leaving loved ones behind – a reminder of the sacrifices servicemembers make by giving up time with loved ones while on deployment. There’s no cellphone service thousands of miles away from any shoreline, and contact with family back home is limited.

Several floors above, flight operations continued into the night. No cameras were allowed after dark; it was lights out on the ship deck and anything besides the soft yellow and blue illuminations along the runway could thwart the pilots’ abilities to land.

From vulture’s row on the carrier’s tower, I counted five aircraft swarming from miles above. Their red flashing lights stood out like crimson stars weaving around the Big Dipper.

As each jet approached the deck, its thunder boomed through the night’s silence. They were nearly invisible in the darkness until their tailhooks hit the arresting cable and sparks lit up the flight deck. Only once did I see a jet miss like our C-2 Greyhound had that morning.

With 3,000 rooms and numerous identical corridors and hallways, it’s easy to get lost aboard what Lt. Cmdr. Tim Hawkins, Carrier Strike Group One spokesman, called a “floating city.”

After retiring for the night, on my way back from the shower room in my bathrobe, I took a wrong turn and passed the commander’s office. A helpful sailor escorted me back to my room.

I climbed into the top bunk of a bed stacked three racks high. Most sailors sleep in similar situations, though with a little less head room. The gentle swaying of the ship rocked me to sleep. I awoke the next day with a backache and newfound gratitude for my bed back home.

The exercise marked the fourth nation that Carrier Strike Group One interacted with during the deployment that began Jan. 5, Hawkins said. The Carl Vinson made history when it sailed into Danang earlier in March, becoming the first U.S. aircraft carrier to visit Vietnam since the war ended more than four decades ago.

That afternoon, we flew back to Okinawa, where the accommodations of civilization — including comfortable beds — awaited us. The crew of the Carl Vinson was expected to celebrate its own homecoming in San Diego on April 12.