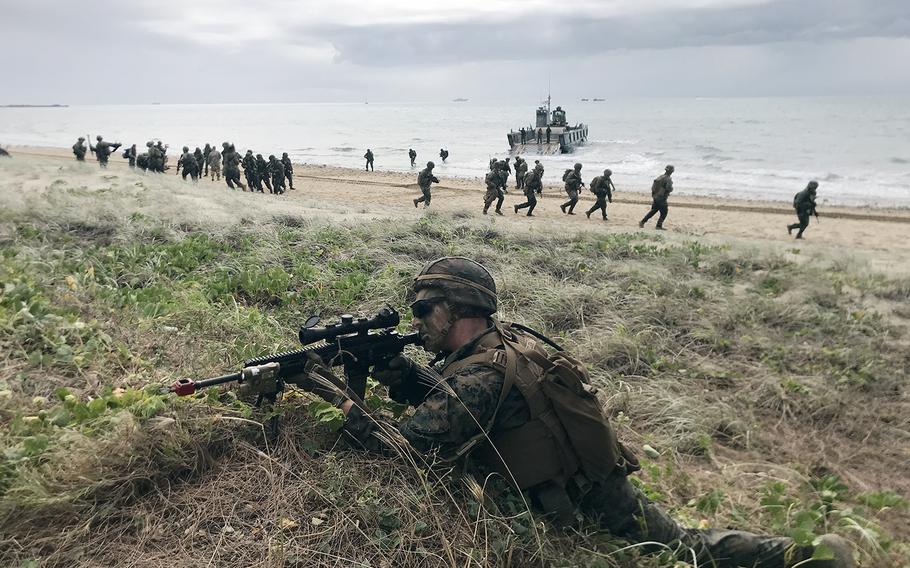 U.S. Marines storm a beach in Summer 2019 during the Talisman Sabre exercise in Queensland, Australia. (Seth Robson/Stars and Stripes)

U.S. Marines storm a beach in Summer 2019 during the Talisman Sabre exercise in Queensland, Australia. (Seth Robson/Stars and Stripes) 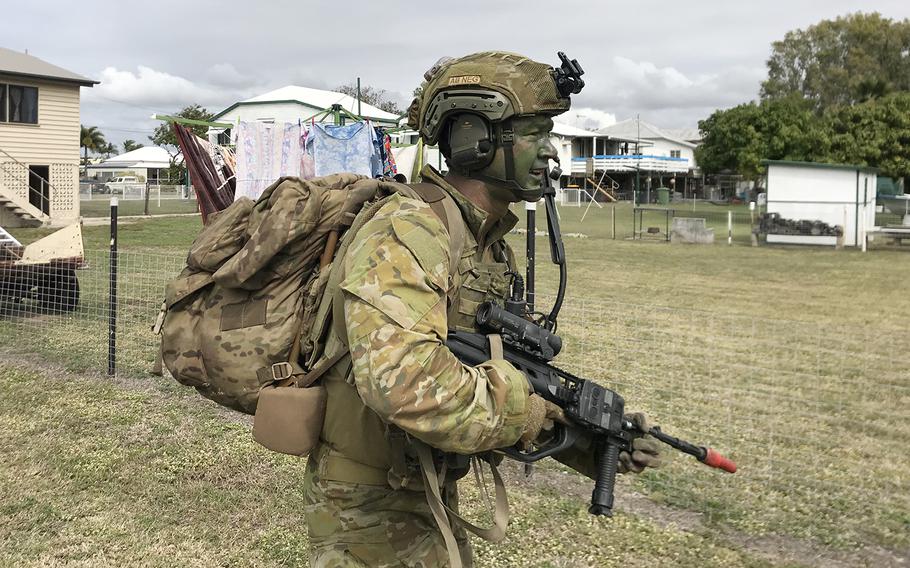 An Australian soldier patrols with U.S. Marines in Summer 2019 during the Talisman Sabre exercise in Queensland, Australia. (Seth Robson/Stars and Stripes)

A 10-year plan, outlined during a livestreamed speech at the Australian Defence Force Academy, includes working with the United States to develop missile defense for deployed forces and acquiring long-range missiles to protect shipping lanes.

The plan will take annual defense spending beyond 2% of GDP, Morrison said.

Morrison said his nation faces “the most challenging times since the 1930s and early 1940s.”

The nation must prepare for a post-pandemic world that is poorer, more dangerous and more disorderly, he said.

“The Indo-Pacific is the epicenter of rising strategic competition,” Morrison said. “It is the focus of the dominant global contest of our age.”

Tensions over territorial claims are rising across the region from the South China Sea to the East China Sea and the border between China and India, he said.

“The rest of the world and Australia are not just bystanders to this,” he said. “We are undertaking the biggest regeneration of our navy since the second World War and have chartered the transition to a fifth-generation air force.”

Morrison promised to boost the military’s ability to deal with “gray zone” activity against Australia’s interests that falls below the threshold of traditional armed conflict.

Australia will purchase the AGM-158C Long Range Anti-Ship Missile from the U.S. Navy at a cost of $553 million, The Australian newspaper reported Tuesday. The missile has a range of more than 230 miles compared to the 77-mile range of Australia’s 1980s-era AGM-84 air-launched Harpoon anti-ship missile.

Up to $6.42 billion will also be spent on research and development into high-speed, long-range weapons, including hypersonic weapons, the newspaper reported.

A further $6.91 billion to $11.75 billion will be spent on fighter aircraft, suggesting Australia may expand its Joint Strike Fighter program involving the F-35 Lightning II, according to the newspaper.

Australia is also looking at acquiring the M142 High Mobility Artillery Rocket System, or HIMARS, a light multiple rocket launcher developed in the late 1990s for the U.S. Army, the newspaper reported.

A massive underwater surveillance system using high-tech sensors costing between $3.45 billion and $4.83 billion is one of the biggest new purchases that could eventually also include unmanned submarines, the newspaper reported.

The plan is a hardening of Australia’s strategic position and mirrors a hardening of the U.S. position, Paul Buchanan, an American security analyst based in Auckland, New Zealand, said in an email Wednesday.

“The US makes no bones about the fact that China is considered to be the prime adversary in the Western Pacific,” he said. “The Australians feel the same.”

Australia and other states in the region are reacting to China’s actions, Buchanan said.

“[The Chinese] have been very provocative and have really pushed the envelope of toleration amongst their neighbors,” he said.

The Australian defense boost puts the Chinese on notice that they will not be able to project power unimpeded, Buchanan added.

“They are going to ring fence China as much as possible,” he said. “At least the Australians will have the assets to make it very costly for China to do military progression in the Southwest Pacific.”