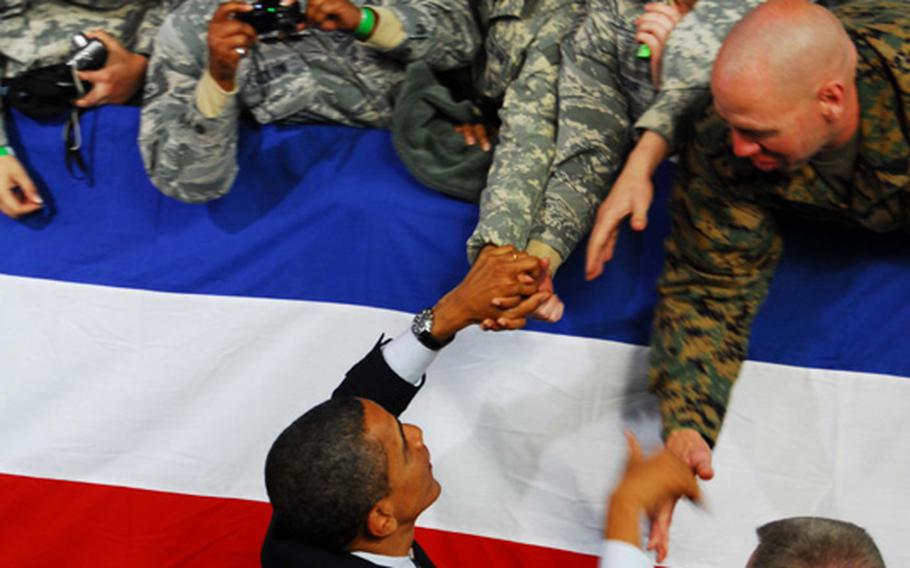 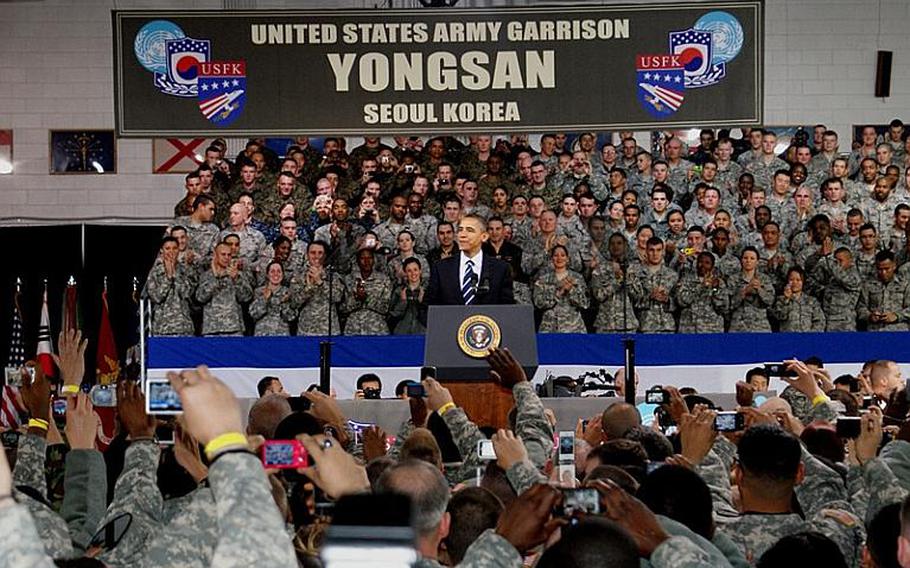 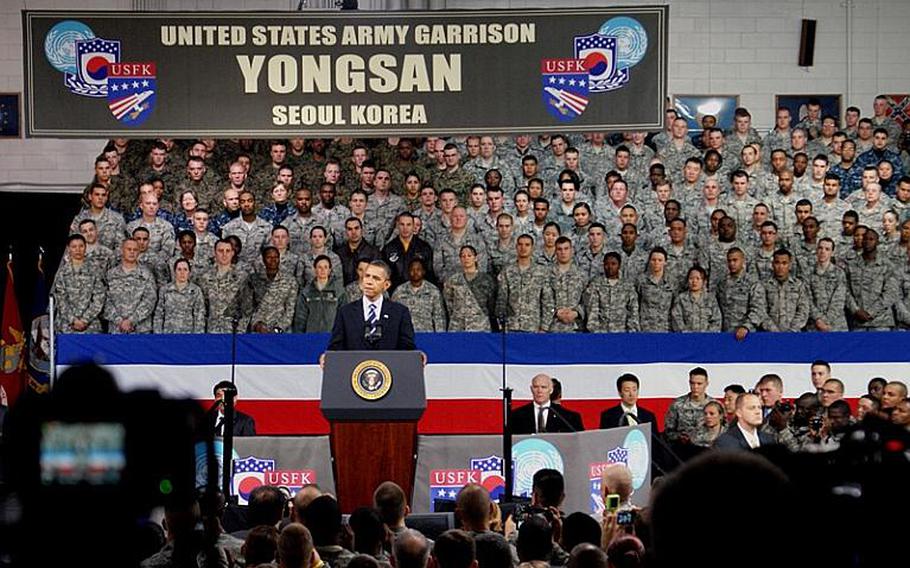 Buy Photo
President Barack Obama talks about the emergence of South Korea and the continued despair of the North during a visit with soldiers and family members at Collier Field House, at U.S. Army Garrison-Yongsan in Seoul, on Nov. 11, 2010. (Alfredo Jimenez/Stars and Stripes) 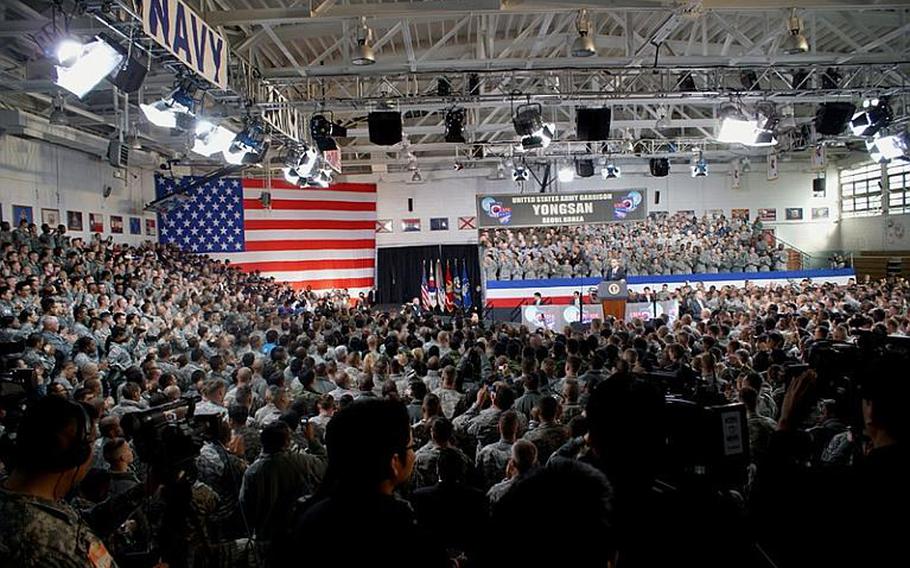 In a Veterans Day speech to a standing room-only crowd at U.S. Army Garrison-Yongsan, the president also reiterated the United States&rsquo; commitment to the security of South Korea, saying the brutal Korean War in which 37,000 U.S. troops died was worth fighting.

He said although the war may have ended with little change in the boundary between the two countries, South Korea and its allies were the undisputed victors.

&ldquo;One thing was clear: this was no tie,&rdquo; said Obama, who is in Seoul for the G-20 summit on Thursday and Friday. &ldquo;This was a victory then, and this is a victory today.&rdquo;

Obama&rsquo;s visit highlights the stark differences between poverty-stricken North Korea and the developed South, which has emerged as one of the world&rsquo;s largest economies and is the first Asian nation to host the G-20 summit &mdash; a gathering of the world&rsquo;s wealthiest nations.

Obama spoke for about 15 minutes to a crowd of 1,600 troops, family members and Korean War veterans at Collier Field House, recounting the battles of the Korean War and thanking all who have served.

The largest cheers came when he mentioned the post-9/11 GI Bill and efforts to reduce the number of homeless veterans.

&ldquo;I want all of you to know when you come home, your country is going to be there for you,&rdquo; he said. &ldquo;That is the commitment I made as commander in chief.&rdquo;

After shaking hands and stopping to applaud for a section of veterans as he walked out of the building, Obama laid a wreath at a war memorial at Yongsan before leaving the base.

&ldquo;His being here, just seeing him &mdash; it means more to us than anything he could do or say,&rdquo; said Staff Sgt. Carlos Barnes, who arrived in South Korea for a one-year tour less than a week ago.

Staff Sgt. Shannon Wyatt remembered watching Obama win the presidential election while pulling the night shift at a base in Iraq three years ago. On Thursday, she watched his speech from the edge of the crowd, and said he seemed genuine.

The highlight of her day was shaking Obama&rsquo;s hand and talking to him briefly as he greeted troops.

&ldquo;For me, it&rsquo;s a dream come true,&rdquo; she said. &ldquo;I&rsquo;m going to be 100 years old and telling my grandchildren that he asked, &lsquo;How are you doing today?&rsquo;&thinsp;&rdquo;

Also in the audience was Medal of Honor recipient Hector Cafferata, whom Obama recognized during his speech.

In 1950, Cafferata &mdash; then a 19-year-old private fighting in the Chosin Reservoir, where some of the fiercest combat during the war occurred &mdash; picked up a grenade thrown into his fighting position and tried to toss it out. It detonated in his hand and severely injured his arm.

&ldquo;I remember my blood spilling out and wondering how much time I had to go,&rdquo; the Venice, Fla., resident said after Obama&rsquo;s speech. &ldquo;As I think back today, it was a small price to pay. When I look around today, I&rsquo;d spill it again.&rdquo;

South Korea is the president&rsquo;s third stop on an Asian tour that took him to India and Indonesia. He travels to Japan on Friday for the Asia-Pacific Economic Cooperation summit and returns to the White House on Sunday.