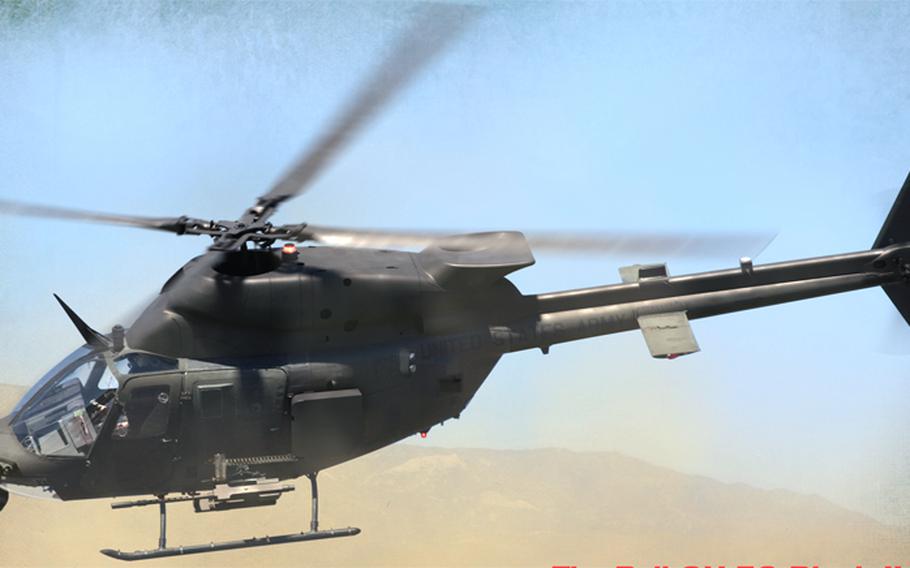 SEOUL – For the second time in the past year, the U.S. Army has announced that a unit will return to the peninsula after years of deployment elsewhere.

Earlier this month, plans for the nine-month rotational deployment of the 4th Squadron, 6th Cavalry Regiment from Joint Base Lewis-McChord, Wash., to Camp Humphreys in South Korea on Oct. 1 were revealed.

The air reconnaissance squadron is composed of about 380 soldiers and 30 OH-58D Kiowa Warrior helicopters, according to an Army statement.

“The squadron will provide a trained and combat-ready rotational force that will deploy with their equipment to South Korea,” the statement read. “The equipment will remain in country for use by follow-up rotations.”

The squadron will join the 2nd Combat Aviation Brigade here after a five-year absence from the Korean Peninsula, the statement said. The squadron deployed to Iraq in 2008 but did not return to South Korea, and instead spent 2009 through this year supporting units at Lewis-McChord.

The squadron’s soldiers will return to Washington after completion of their nine-month rotation.

Late last year, the Army announced that the 250-member 23rd Chemical Battalion would soon return to South Korea after spending the past eight years at Joint Base Lewis-McChord.

Army spokesman Lt. Col. Donald Peters said this month that it would be “pre-decisional” to say if one-, two- and three-year tours in South Korea might someday be phased out — partially or altogether — in favor of rotational units.

“As of now, the rotation of the ARS is the only one scheduled,” he said. “A second rotation ARS will deploy to Korea nine months after the first ARS deploys. Rotations will continue every nine months.”

Peters said, “We are realigning our forces on the Korean Peninsula to prepare for the transition of wartime operational control to (the South Korea military) in December 2015.”

“This transition will allow for [South Korea] to take the lead role in the combined defense of Korea, supported by an enduring, capable U.S. military force presence on the Korean Peninsula, in the region and beyond,” he said.

The transfer of operational control, OR OPCON transfer, has been the subject of continuing debate in Washington and Seoul for years given the ongoing threat posed by North Korea and differing opinions about whether the South’s military is up to the task of leading the fight if hostilities resume on the peninsula.

The transfer of responsibility was supposed to happen in 2007, but was postponed until 2012. In 2010, that target date was pushed forward again, to 2015. In recent weeks, Korean media outlets reported that Seoul had asked Washington to once again postpone the move due to ongoing concerns about North Korea’s nuclear weapons program.

The transfer of command and the related 2016 plan to move most U.S. troops now stationed in and north of Seoul to bases south of the South Korean capital are both designed — symbolically and practically — to give the South’s military a more high-profile role in the defense of its country after 60 years of American control.

The U.S. military is usually reluctant to tie the movement of manpower or equipment to the ever-present threat posed by North Korea.

However, when the 23rd Chemical Battalion return was announced, the 2nd Infantry Division issued a statement saying, “In Korea, like no other place on the globe, the potential for large-scale, full-spectrum conflict against the U.S. and its allies exists on a daily basis.”