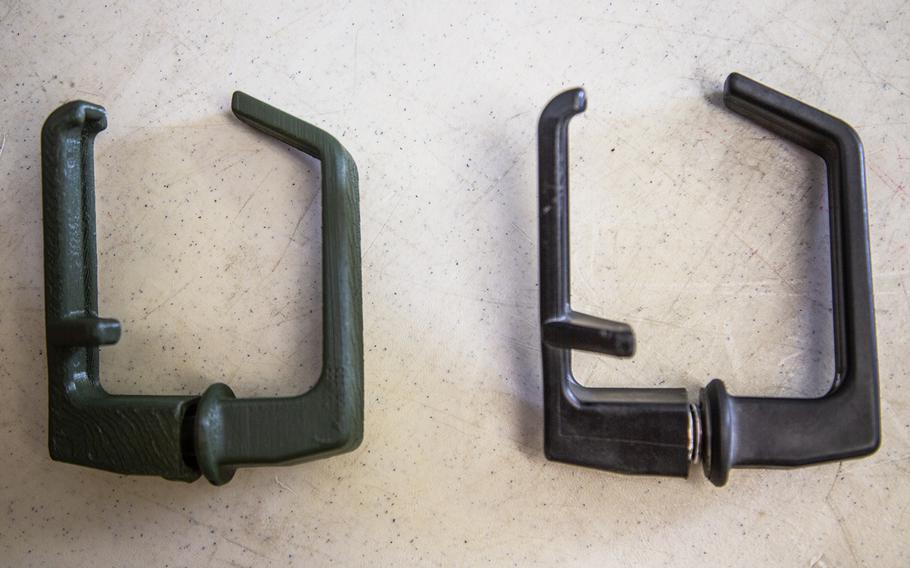 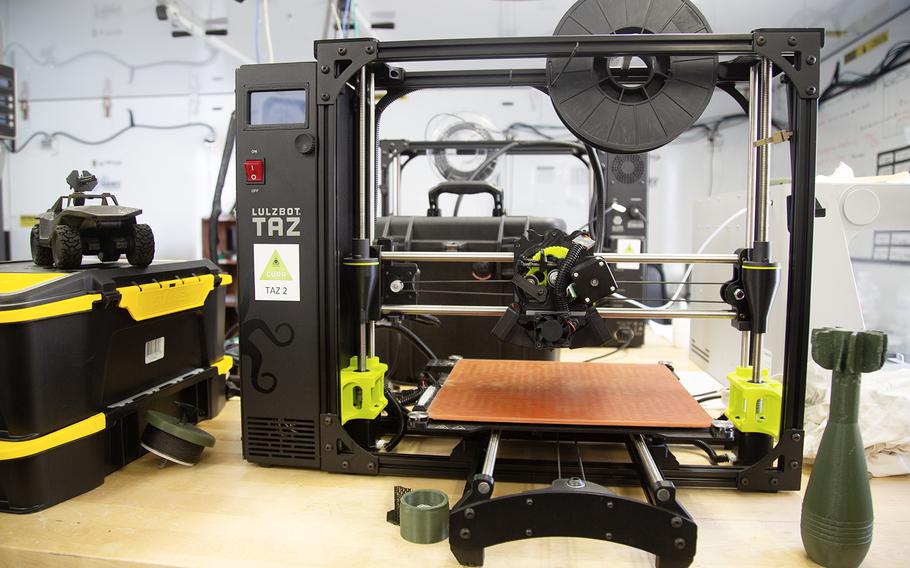 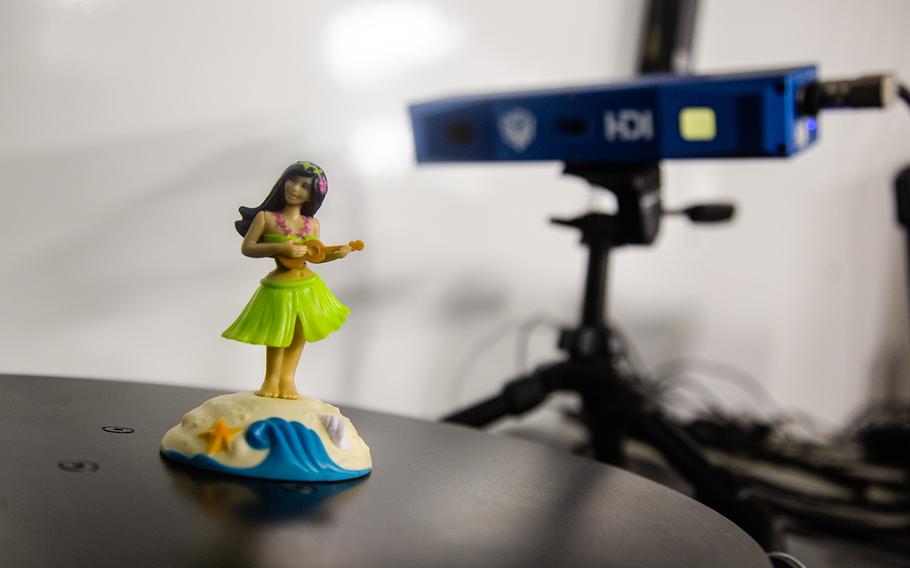 Buy Photo
A plastic hula girl is set aside for scanning inside the Army's Rapid Fabrication via Additive Manufacturing on the Battlefield facility at Camp Humphreys, South Korea, Monday, Oct. 29, 2018. (Marcus Fichtl/Stars and Stripes ) 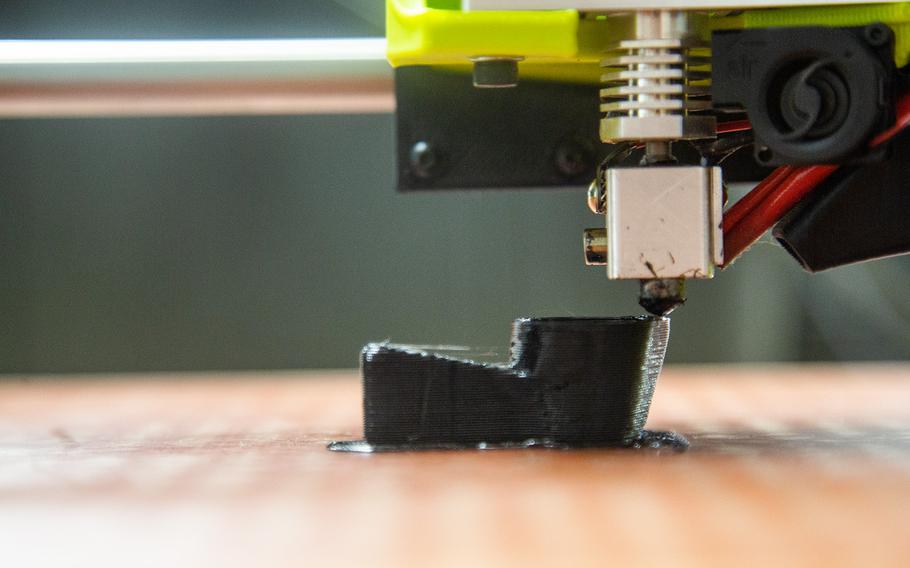 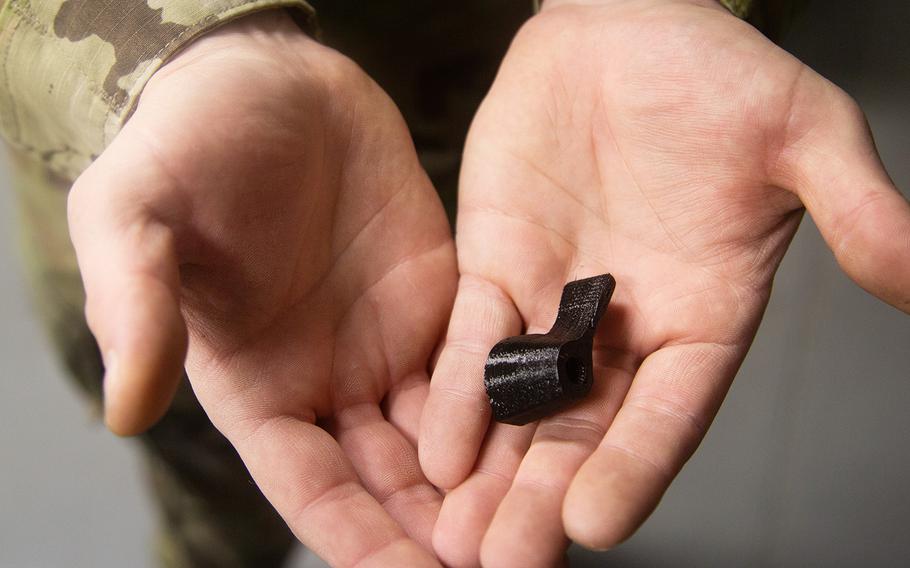 CAMP HUMPHREYS, South Korea — Soldiers in South Korea can now get broken-down tanks and trucks ready for battle quicker thanks to a new experimental 3D-printing facility.

Known as the Rapid Fabrication via Additive Manufacturing on the Battlefield, or RFAB, the facility and its five 3D printers can produce everything from Humvee ignition switches to M4 rifle butt-stocks by layering material into the shape of the desired object.

This is the fourth deployment of the $250,000 facility, which arrived at Camp Humphreys in August.

But unlike the other deployments that lasted only a month, Chief Warrant Officer Dewey Adams said his team of six soldiers will operate the RFAB here for a full year.

The Army chose the 2nd Sustainment Brigade for its first yearlong test because of the near-deployment nature of South Korea, Adams said.

“We’re trying to validate the use of additive manufacturing in the future of the [Army],” he told Stars and Stripes on Monday inside the small shipping container-like facility.

Some of the smallest and least impressive parts have been the most valuable, Adams said.

For example, a missing or broken fire suppression cap that could immobilize a massive Mine-Resistant Ambush Protected vehicle may cost only $2.51, but it has a shipping time of 126 days from the United States.

Adams said his team can build the part on site in less than two hours and put the truck back on its way.

The program has restraints. The parts produced are meant as temporary replacements until the originals arrive. The unit also can’t produce parts requiring metal since its machines can only build plastic and some carbon-enhanced products.

Adams said the team can’t produce parts that would cause catastrophic harm to people if they were to break, like a rifle’s firing pin or helicopter part.

But the quick turnaround time from design to printing, which ranges from two hours to a few days, and the ability to deploy the facility anywhere and start producing parts within the hour makes RFAB a boon on the battlefield, he said.

“We want the asset as close to front line as we can,” he said.

The unit has produced about 65 different parts and about 500 pieces of equipment in three months, Adams said, adding the creations have a success rate of about 65 percent.

Even failures are a win because they provide insight into the limitations of the current technology that can be used at the Army Armament Research, Development and Engineering Center in Rock Island, Ill.

Successful products are also sent to ARDEC and their blueprints are saved to a military-wide data cloud that can be accessed by any branch, Adams said.

He acknowledged that the Marines and Navy are slightly ahead in adopting the new technology.

Billy Binikos, an ARDEC representative who works with Adams, said the Army could adopt RFAB facilities for regular use in 2025.

Adams, who has spent 15 years in the Army building parts, said the future is bright for the new 3D field capabilities.

“The only limitation is our imagination,” he said.