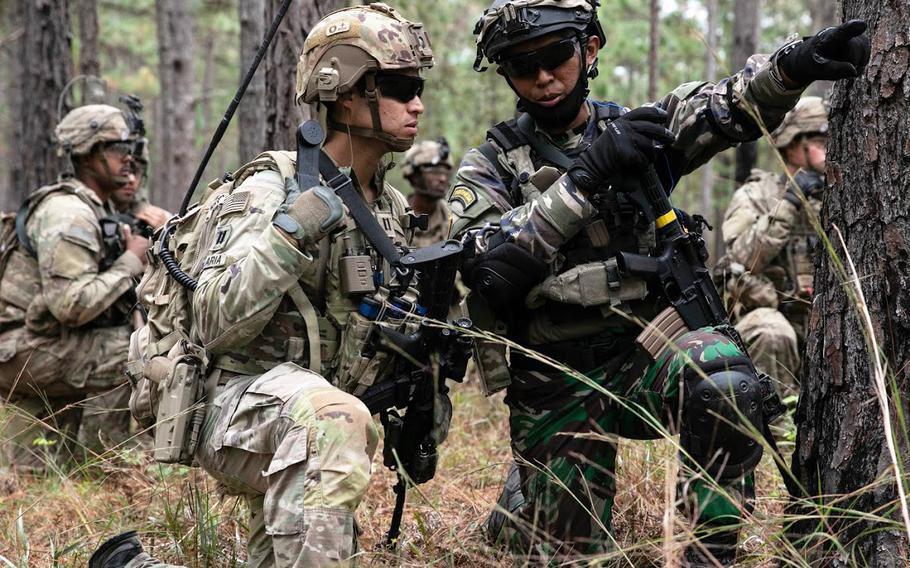 AUSTIN, Texas — The Army’s 5th Security Force Assistance Brigade is halfway through a training rotation set to prepare its troops to advise partner countries in the Indo-Pacific — a region where American forces look to gain a foothold against Chinese influence.

“Our goal is to be a partner of choice in a dangerous world. What we want is our partners to see the way we operate,” Brig. Gen. Scott Jackson, commander of the Security Force Assistance Command, said Wednesday during a call with reporters.

His command serves as the higher headquarters for all five of the Army’s active-duty advisory brigades, known as SFABs. A sixth SFAB was established in the National Guard.

Based out of Joint Base Lewis-McChord, Wash., more than 600 soldiers from the 5th SFAB are running through a first-of-its-kind, large-scale training rotation at the Joint Readiness Training Center at Fort Polk, La., to prepare for deployment next year to several countries in the Indo-Pacific region. The 14-day exercise simulates guiding a partner nation’s military through an invasion and insurgency from a hostile neighbor, said Brig Gen. Curtis Taylor, brigade commander.

About 2,300 soldiers from Lewis-McChord’s 1st Stryker Brigade Combat Team of the 2nd Infantry Division are serving as the opposing force for the rotation. They’ve been told to fight and operate as they would in combat.

Previous training rotations for security force assistance brigades have focused on counterinsurgency missions in Afghanistan, but earlier this year the Security Force Assistance Command regionally aligned each of its five brigades with combatant commands of the world: Southern Command, Africa Command, Central Command European Command and Pacific Command. Now the brigades are beginning to train specifically for the region they support, Jackson said. The National Guard’s SFAB is designed to augment the active units.

This alignment is consistent with the National Defense Strategy, Jackson said. In the Pacific, the defense strategy calls for strengthened alliances and partnerships.

“You’re not helping them by taking the American processes and insisting that they do it our way,” Jackson said. Instead countries want to learn how the American Army invests in junior leaders and its noncommissioned officer corps and adapt that to their military, he said.

Before this month’s training rotation, the brigade sent seven teams to Thailand and one to Indonesia. Soldiers worked with those countries’ militaries to lay groundwork for a future Stryker brigade and develop schools and training programs. American troops have worked closely with one group of soldiers from the Royal Thai Army for three training events in Hawaii, Thailand and Fort Polk to build a relationship.

The brigade’s teams range from four to 12 soldiers and are all lead by a captain.

Capt. Matt Brown, who participated in those training events with the Thai army, said he watched as the soldiers from the two countries became “a collective team and not a U.S. unit with a Thai unit operating separately.”

During his trip to Thailand, he said his team lived and worked on a Thai military base, which also helped build trust between soldiers.

“That’s the model we see going forward,” Taylor said. “We really believe that through a sustained forward presence we can build trust over time with partners and allies in the Pacific. That’s what we’re setting the conditions to do across the region.”

Moving forward, the SFABs plan to have a greater enduring presence in the countries with which they are aligned. Taylor expects that about a third of his brigade will deploy every six months to keep a steady rotation and presence. That would give troops an operational tempo of six months deployed and 12 months at home.

Navy Secretary Kenneth Braithwaite announced earlier this week his service branch’s pitch to increase its presence in the same region. He called for the reactivation of the Navy’s 1st Fleet, possibly in Singapore. Currently, the Navy’s 7th Fleet is the only one in the region, based out of Japan.

While Taylor and Jackson did not name all the countries the assistance brigades work with, Taylor said it not just about working with nations struggling to build a baseline-level military.

“We’ve found that we’ve got an awful lot to offer very capable militaries on interoperability and on integration, on a lot of warfighting functions like artillery, engineers and logistics that have been the core competencies of U.S. military,” he said. “If we work with capable militaries in the Pacific, we’re going to find that that’s our greatest strength.”