An aerial view of Camp Schwab, Okinawa, shows the future site where the Futenma Air Facility is to be relocated. (Jose O. Nava/U.S. Marine Corps)

An aerial view of Camp Schwab, Okinawa, shows the future site where the Futenma Air Facility is to be relocated. (Jose O. Nava/U.S. Marine Corps) 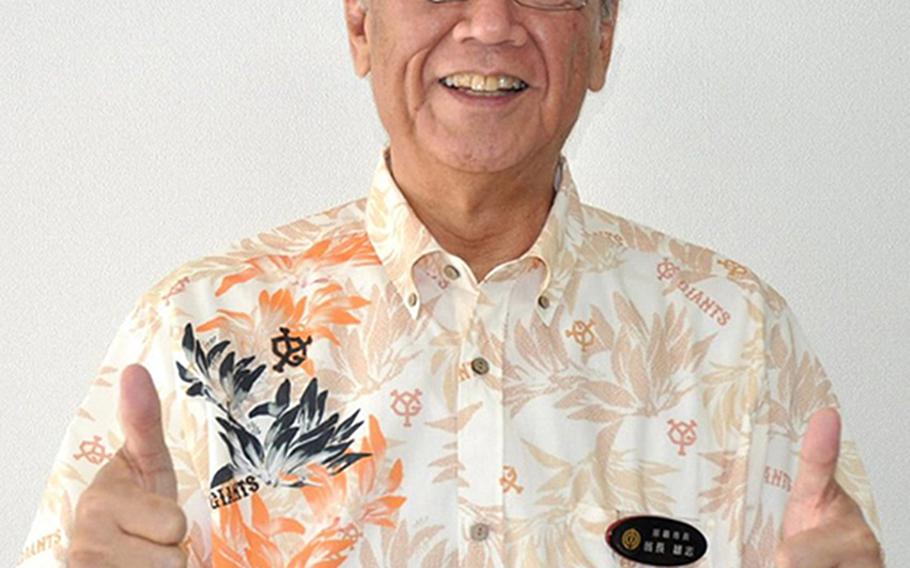 All eyes had been on the race as it had widely been seen as a referendum on Tokyo’s policies regarding U.S. military posture in Japan, as well as a new U.S. military runway slated for the northern city of Nago.

Onaga, who will take office Dec. 10, had vowed to block efforts to move flight operations from Futenma to Camp Schwab, if elected. He claimed U.S. military bases were the biggest obstacle to the island’s economic development and called for a smaller U.S. military footprint as well as the removal of the controversial MV-22 Osprey aircraft.

“This is a new page of Okinawa’s history,” Onaga said immediately after his victory was announced.

“Okinawa has suffered from the burden of the heavy military presence for the past 69 years. Enough is enough is the voice of Okinawa. The Futenma operations must be moved outside Okinawa, outside Japan. I will make my best effort to stop the construction of the new military facility at Henoko and remove the Marine Corps Ospreys from Okinawa.”

Futenma became a focal point of protests in the late 1990s over fears that aircraft from the base could crash in its densely populated urban surroundings. Efforts only intensified after a CH-53D Sea Stallion crashed into nearby Okinawa International University in 2004.

As the movement to close Futenma picked up steam and came closer to becoming a reality, protesters then took on Tokyo over the decision to expand Camp Schwab in the north and move the operations there. As the move progressed, they attempted to block the MV-22 Osprey from coming to Okinawa. The aircraft had several high-profile crashes during its development yet has been reliable in combat in the Middle East for years now.

The Osprey arrived in Japan in September 2012 to replace the Marine Corps’ CH-46E Sea Knight assault support helicopter. There have been no incidents regarding the aircraft since its arrival.

Onaga said that the election had given him a mandate and he planned to go as far as the United Nations to stop the relocation if the U.S. and Japanese governments did not listen.

When asked, voters were split.

“I want the runway to be moved out of Okinawa,” said Tsuyoshi Sawada, 53, of Ginowan. “I believe the current will change and there will be a chance for Okinawa to stop the project when our voices are heard through this election.

A 74-year-old woman who did not want her name be printed said that closure of Futenma was the most important issue to her.

If the relocation is effectively blocked, it will likely delay closure of the base.

“What if the air station that sits in the middle of the city remains there forever?” she said. “We need the military presence; it is for the national security. Does opposing the Henoko plan help to close Futenma?”

Whether Onaga has the power to stop the relocation remains to be seen, but as governor, he can clearly complicate matters for Washington and Tokyo. Construction on the new runway into Oura Bay began in August.

Despite polls in recent weeks that showed him trailing, Nakaima was shocked that he had lost.

“The result was completely unexpected,” Nakaima said at his campaign headquarters. “My intention, as I have said in my public promise, is to remove the danger posed by Futenma operations at the earliest possible day.”