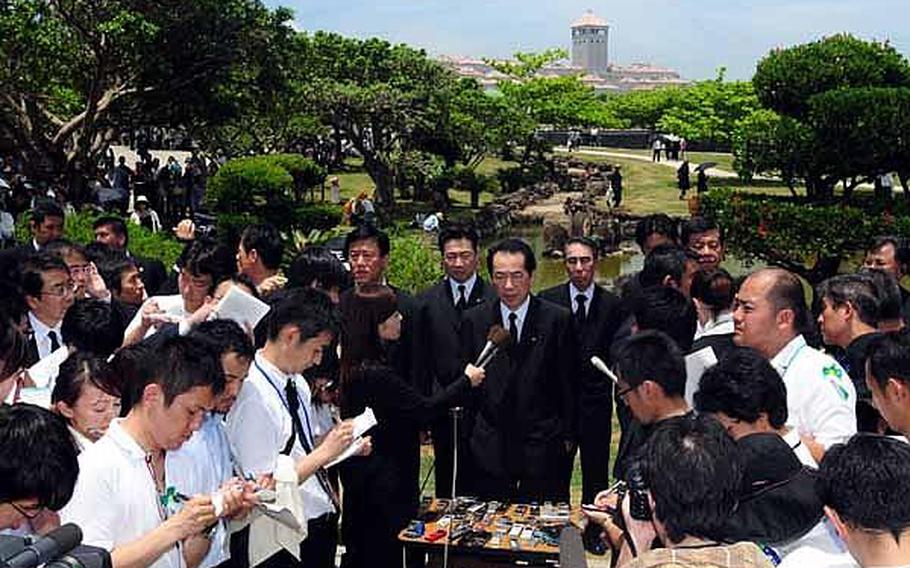 Buy Photo
Prime Minister Naoto Kan talks to reporters after a memorial service held at Peace Prayer Park concluded, Thursday. The annual memorial ceremony takes place on June 23 to mark the anniversary of the end of the Battle of Okinawa. (Matt Orr/Stars and Stripes)

Buy Photo
Prime Minister Naoto Kan talks to reporters after a memorial service held at Peace Prayer Park concluded, Thursday. The annual memorial ceremony takes place on June 23 to mark the anniversary of the end of the Battle of Okinawa. (Matt Orr/Stars and Stripes) 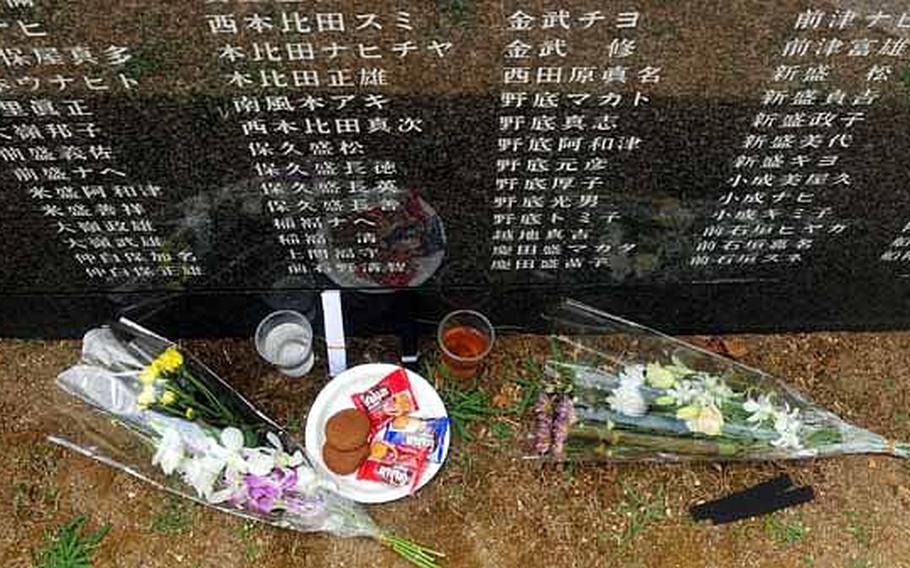 Food, drinks, and flowers rest at the base of one of the many granite walls etched with the names of all who died during the Battle of Okinawa. () 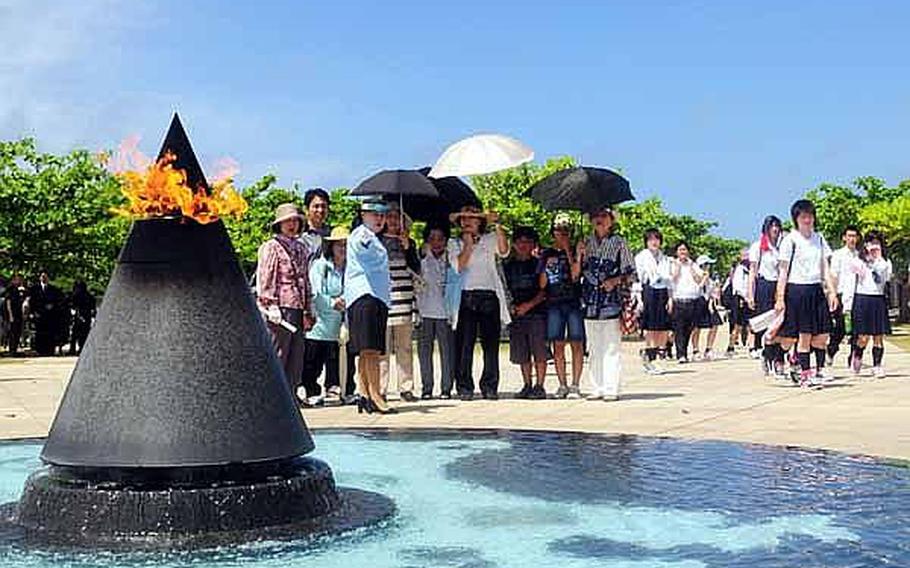 Buy Photo
A tour guide explains to listeners about the 'Flame of Peace,' memorial, which is at the end of the 1,200 granite walls bearing the names of 240,000 military and civilians who died during the Battle of Okinawa. The top of the metal cone is lit at all times and water tumbles from the base of the cone and fills a circular pool with a map of the Pacific at the bottom. (Matt Orr/Stars and Stripes) 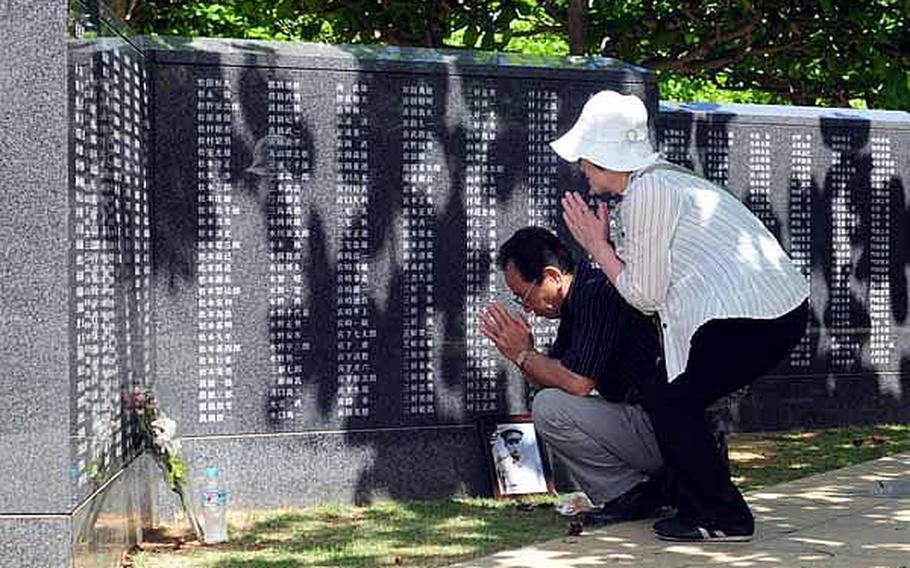 Buy Photo
A man and woman bow their heads and offer a few minutes of prayer for a loved one who died in the Battle of Okinawa. (Matt Orr/Stars and Stripes) 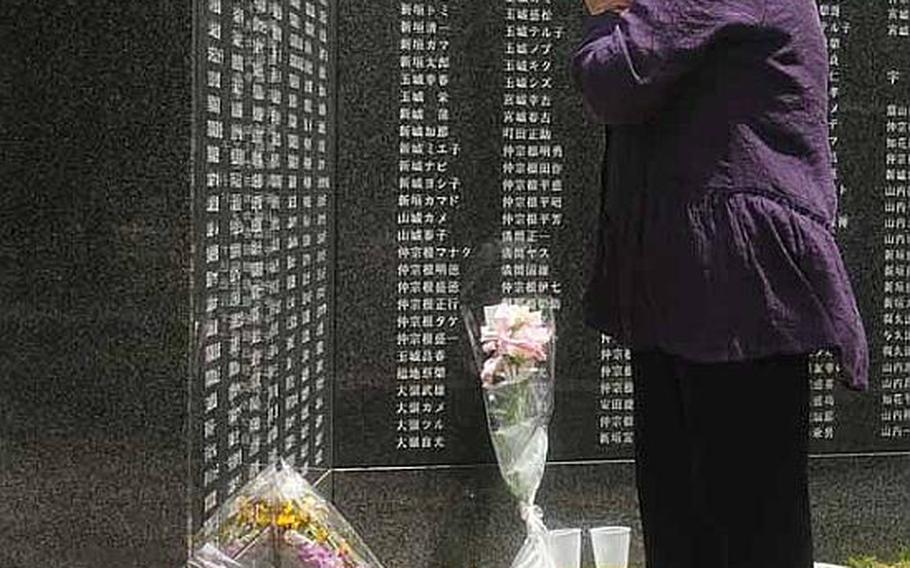 Buy Photo
A woman offers prayers at Peace Prayer Park on Wednesday, the anniversary of the end of the Battle of Okinawa. More than 240,000 names are inscribed on the granite walls, memorializing all those that lost their lives. (Matt Orr/Stars and Stripes) 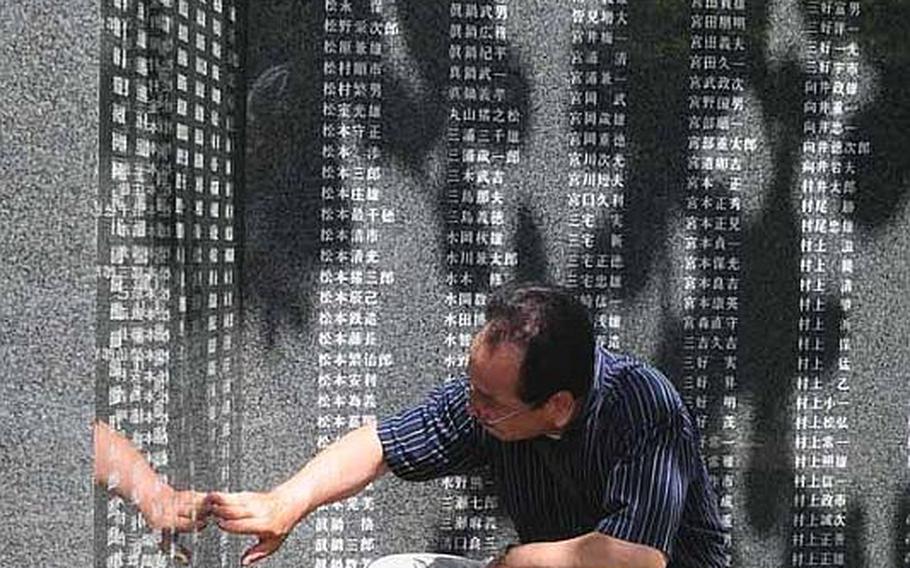 Buy Photo
A man touches name of a loved one at a memorial of the Battle of Okiwana. There are more than 240,000 names etched into the large granite walls. (Matt Orr/Stars and Stripes) 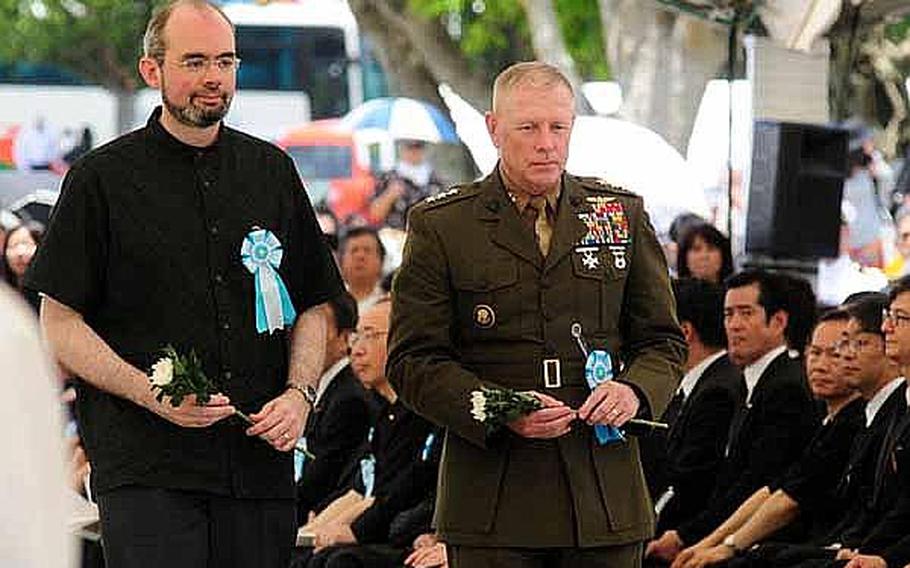 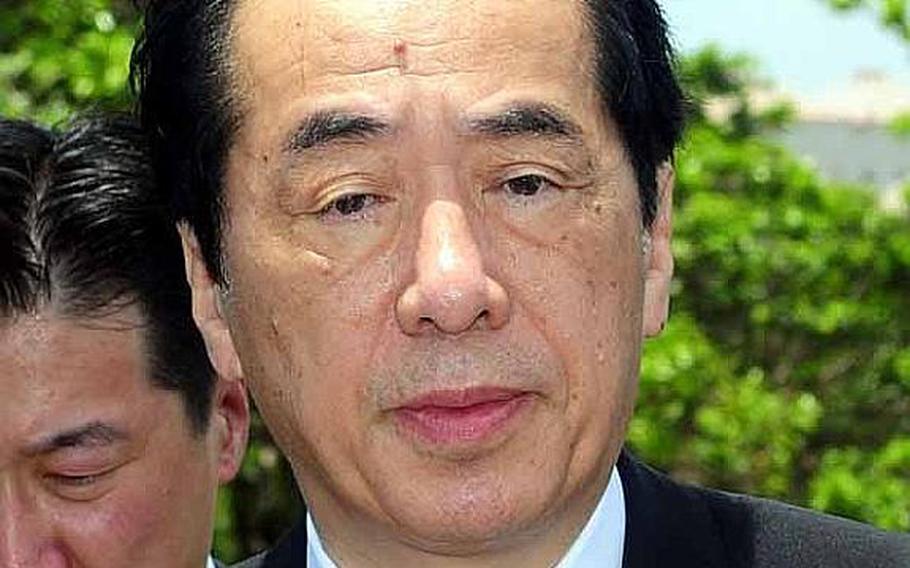 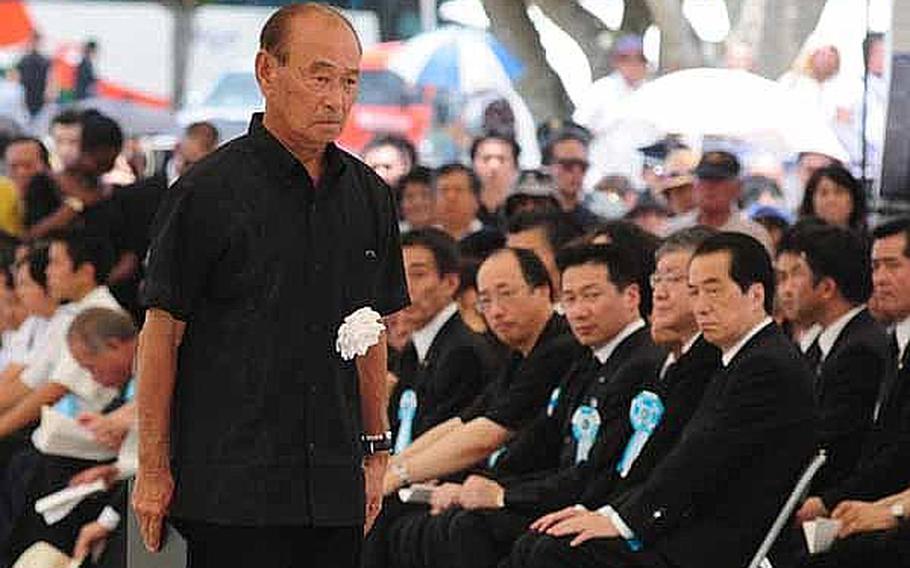 Buy Photo
Okinawa Governor Hirokazu Nakaima finishes his bow to government officials after placing a chrysanthemum on a table during the Battle of Okinawa memorial service Thursday at the Peace Prayer Park in Itoman. (Matt Orr/Stars and Stripes) 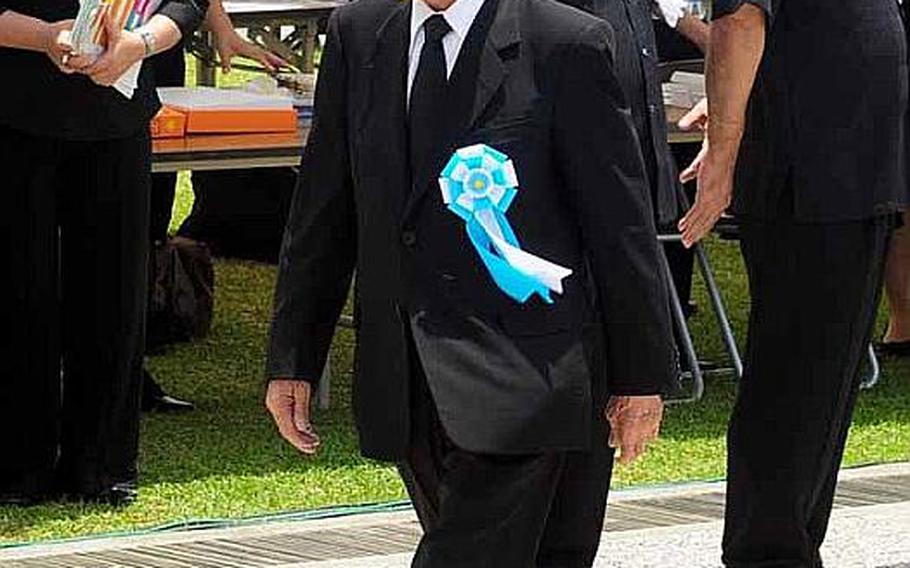 Buy Photo
Takeo Nishioka, Speaker of the House of Councilors walks to his chair Thursday for the commencement of the Battle of Okinawa memorial service at Peace Prayer Park in Itoman. (Matt Orr/Stars and Stripes) 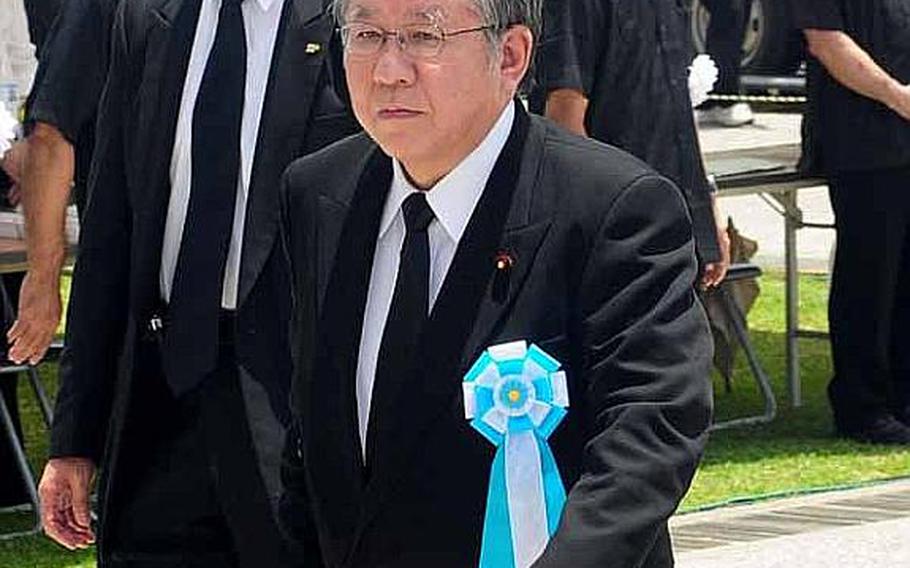 Buy Photo
Takahiro Yokomichi, Speaker of the House of Representatives walks to his chair for the commencement of the Battle of Okinawa memorial service at Peace Prayer Park in Itoman. (Matt Orr/Stars and Stripes)

CAMP FOSTER, Okinawa &mdash; Japan Prime Minister Naoto Kan faced angry Okinawa leaders Thursday, following this week&rsquo;s decision by his government and the United States to push ahead with the unpopular relocation of Marine Corps forces on the island.

Kan came to Okinawa to mark the end of the World War II battle for the island, but his visit was overshadowed by a vow Tuesday by top ministers and their counterparts, Secretary of State Hillary Clinton and outgoing Defense Secretary Robert Gates, to relocate the Futenma air station on the island.

Okinawa leaders decried the decision during the Kan&rsquo;s visit and demanded the air station be closed immediately. It was the most recent expression of anger over the U.S. military presence here -- and has become an immovable roadblock of opposition for the two countries&rsquo; military plans.

&ldquo;I fully understand the desire of Okinawa to move the operations out of Okinawa and out of Japan,&rdquo; Kan told reporters following the memorial ceremony. &ldquo;We have reviewed it from every angle, however, and the current situation would not allow it.&rdquo;

The prime minister attended the memorial, in which about 5,000 island residents and some local lawmakers took part, before he met in private with Okinawa Gov. Hirokazu Nakaima, a staunch opponent of the Futenma plan.

The relocation of the air station to a less populated area of Henoko is a key piece of a larger bilateral agreement to shift U.S. military forces in the region, including the transfer of about 8,600 Okinawa Marines to Guam.

The realignment plan has caused deep political fissures in Japan for years because of the Okinawa opposition, which pressured Kan&rsquo;s predecessor to resign from office last year.

The U.S.-Japan security summit on Tuesday approved new runway plans for the air station relocation &ndash; the first sign of concrete progress in years &ndash; and attempted to tamp down political problems, which now include growing criticism from U.S. lawmakers, who say the Futenma relocation and military realignment are too expensive.

Gov. Nakaima told reporters Thursday that the decision to follow through with the relocation plan was beyond his understanding.

&ldquo;I have trouble understanding why they are so rigid in thinking, and stick to the idea,&rdquo; he told reporters following the meeting with Kan. &ldquo;If they had more flexible minds and thoughts, a better idea would come up that satisfies all three sides.&rdquo;

Zenshin Takamine, speaker of the Okinawa prefectural assembly, took a harder stance in a speech he delivered before Kan and those at the war memorial ceremony.

&ldquo;A plan by both governments to move the operations to Henoko in Nago is absolutely unacceptable,&rdquo; he said. &ldquo;&hellip; I demand a decision from the U.S. and Japanese governments to remove the threat and reduce the burden from the shoulders of the people of Okinawa by moving Futenma operations outside of Okinawa.&rdquo;