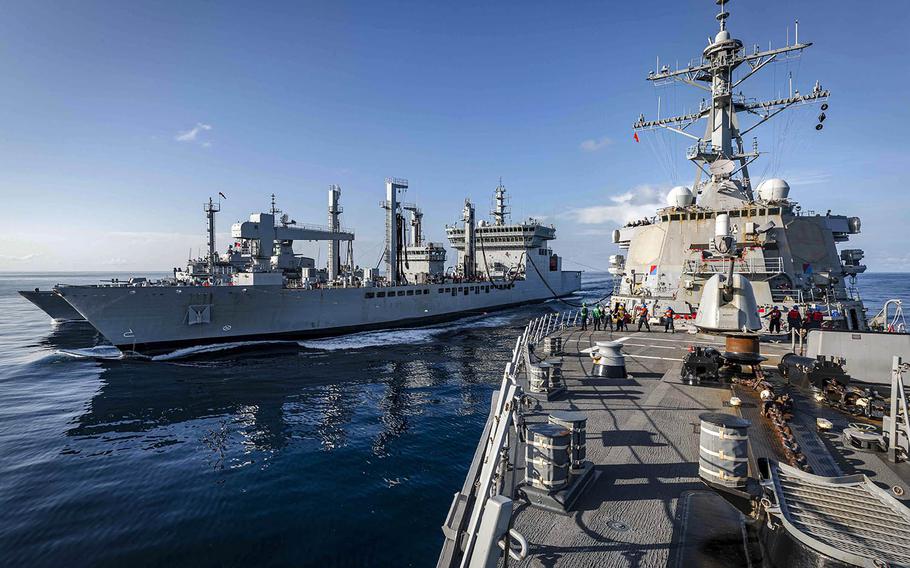 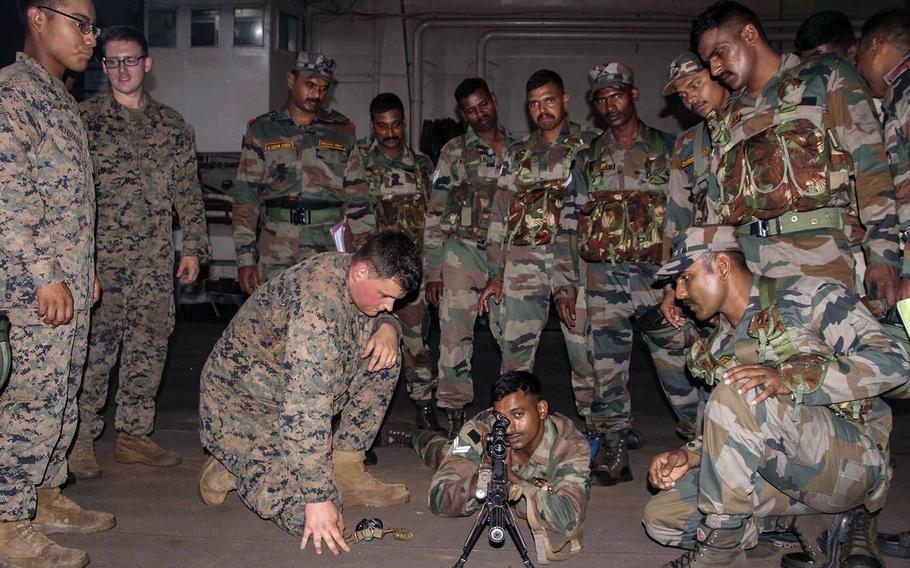 U.S. Marines and Indian soldiers educate one another about their respective weapon systems during exercise Tiger Triumph aboard the INS Jalashwa in India, Nov. 17, 2019. (Indian army) 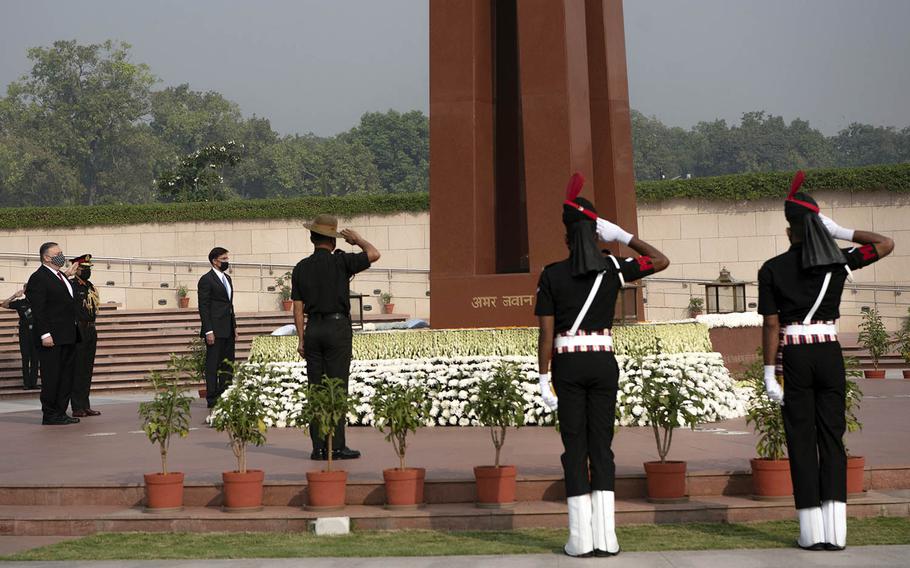 The forward thrust of U.S.-India defense cooperation under the Obama and Trump administrations will likely quicken after Joe Biden is sworn in as the 46th president, despite expectations the Democrat will pay closer attention to the South Asian nation’s troubling human rights record, say defense experts from both nations.

“My sense is we’re going to see the relationship deepened even more now,” said Shyam Tekwani, an India expert at the Asia-Pacific Center for Security Studies in Honolulu. “The real issue is how far does India want to go with the deepening of the relationship.”

Indian Prime Minister Narendra Modi and his Hindu nationalist Bharatiya Janata Party expects support from the United States “in combatting the challenge posed by China and Pakistan,” Abhijit Singh, a senior fellow and security expert at the India-based think tank Observer Research Foundation, said in an email to Stars and Stripes.

“There is an expectation that the US would help India build not just a modern defence arsenal, but also expand military technological capability,” Singh said. “New Delhi would expect a deeper commitment from the Biden administration to build Indian military and defence capability, particularly through joint technology initiatives.”

Driving the military cooperation is a mutual apprehension over China’s growing military might and its desire to dominate the region.

This summer, Indian and Chinese troops clashed in hand-to-hand combat on the disputed border between the two countries, leaving at least 20 Indian soldiers dead in the Galwan Valley. While the border has long been a point of contention between the countries, this summer marked the first time that shots were fired since the two sides entered into a no-fire agreement in 1996.

“The nature of challenges India faces today are markedly different from a few years ago,” Singh said. “China is threatening Indian interests in ways that were not considered a serious possibility back in 2016.”

Meanwhile, as the U.S. Navy grappled with controlling the spread of coronavirus aboard ships with the advent of the pandemic this spring, China seized the moment to increase its naval presence in the South China and East China seas.

Once reluctant to publicize operations and training in the South China Sea, the Pentagon now openly touts its actions there in maintaining a “free and open Indo-Pacific” as an alternative to Chinese dominance.

The defense interests of the two countries are seemingly aligned as never before.

“I do expect the Modi government will engage the Biden administration early,” said Richard Rossow, an India expert at the Center for Strategic and International Studies, a Washington, D.C.-based think tank. “While the engagement may move in new directions, I suspect the Biden administration will keep momentum in the good areas like defense and counterterrorism cooperation while restoring cooperation in areas like climate change.”

A shift in priorities Modi, who became prime minister in May 2014, had cordial ties with President Barack Obama.

By the following year, the U.S. had roughly $15 billion in pending defense sales to India, with joint exercises across all services of the two nations. In September 2015, India’s Cabinet approved spending $2.5 billion on 22 Apache attack helicopters and 15 Chinook helicopters.

Modi has enjoyed even closer ties with Trump, “a bear-hug kind of relationship,” Tekwani said.

On a visit to the U.S. late last year, Trump and Modi shared a Texas stage during what was dubbed a “Howdy Modi” rally, attended by roughly 50,000 people.

It was the border skirmish, however, that shifted India’s defense priorities regarding the U.S., most analysts agree.

“It certainly broke a number of barriers in India’s strategic thinking, in terms of aligning itself closer to the United States,” Tekwani said, though pointing out there still exists “a tremendous amount of resistance” in India to a formal alliance.

The so-called Quad — the informal grouping of the U.S., Japan, Australia and India — which a few years ago had largely fizzled, has been energized in 2020. Underscoring the significance of the Quad, Australia this month joined India, Japan and the U.S. for the Malabar maritime exercise in the Indian Ocean, the first time it has done so in 13 years.

A week before this month’s U.S. election, Secretary of State Mike Pompeo and then-Defense Secretary Mark Esper met in India with top leaders, signing an agreement that expands sharing of military satellite information and, pointedly, paying tribute to Indian troops who died defending their nation, including those killed this summer on the border.

Pompeo’s remarks at the time made it clear that China was the catalyst for the boost in military assistance, saying that the U.S. would “stand with the people of India as they confront threats to their freedom and sovereignty.”

Refocus on human rights Biden, though, will likely widen the extent of America’s relationship with India beyond defense, said Sameer Lalwani, director of the South Asia Program at the Stimson Center, a Washington, D.C.-based nonpartisan think tank.

“I think the Trump administration really narrowed the scope,” Lalwani said. “They really collapsed it down to the defense part of the relationship and either sidelined or ignored other parts of our relationship like immigration or global health priorities. Trade investment became a source of antagonism with the administration’s fairly abrasive approach to trade and investment.”

The Trump administration largely ignored the Modi government’s crackdown on Kashmir and moves to limit the rights of Muslims that have led to violent confrontations.

“I’m sure a Biden administration will pay more attention,” Lalwani said. “I don’t think it’s going to dominate their concerns or priorities, but I think it won’t be as severely diminished as it has been in the past four years.”

“I’m sure a Biden administration is going to raise a point or two about Modi’s handling of his domestic issues, but I do not see that as a dealbreaker,” Tekwani said. “I think India is prepping for it, and it’s not something that they would see as being an impediment to further cooperation.”

Indian officials are also familiar with Biden after his many years as a U.S. senator and then as Obama’s vice president. And the next vice president, Kamala Harris, is the daughter of an Indian immigrant to America.

“I think in many ways India is quite happy with the change in administration, at least in the Foreign Ministry, because there are a number of known faces they’re expecting to be in the new administration, people who are familiar with India,” Tekwani said.

“Biden has a long relationship with India, which has been positive. So, in that sense, I think there’s some relief in India because they expect some steadiness in the relationship.”