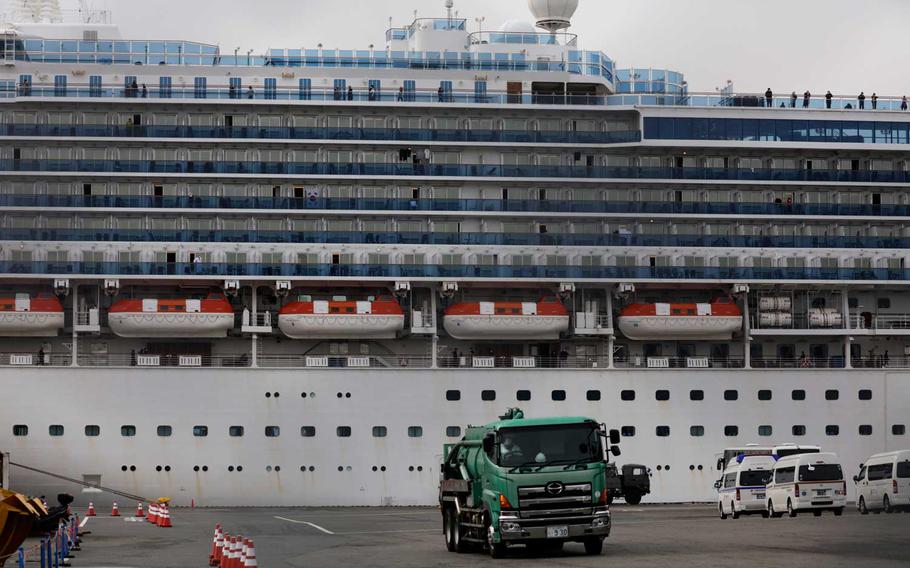 The quarantined Diamond Princess cruise ship is docked at a port, Saturday, Feb. 15, 2020, in Yokohama, near Tokyo. A viral outbreak that began in China has infected more than 67,000 people globally. The World Health Organization has named the illness COVID-19, referring to its origin late last year and the coronavirus that causes it. (Jae C. Hong/AP)

YOKOSUKA NAVAL BASE, Japan — American cruise ship passengers quarantined aboard the Diamond Princess in Yokohama for possible exposure to the new coronavirus will be flown to stateside military bases Sunday evening, according to the State Department. About 400 Americans were among the thousands kept aboard the vessel for two weeks after a guest on their 16-day Asian cruise tested positive for coronavirus six days after leaving the ship in Hong Kong on Jan. 25. American passengers were to disembark the Diamond Princess and leave Japan on a government-chartered plane Sunday evening to Travis Air Force Base near Fairfield, Calif., according to an email sent to them Saturday by the U.S. Embassy in Tokyo. U.S. citizens aboard the ship can choose not to take the chartered flight, but will be banned from returning to the U.S. “for a period of time,” said the message, which did not specify from which airport the flight would depart. Health professionals will assess passengers “every step of the way, including before takeoff, during the flight, and after arrival,” the Centers for Disease Control and Prevention said in a statement Saturday. “U.S. Government staff will conduct risk assessments to ensure the health of each traveler, including temperature checks and observation for respiratory symptoms,” the statement said. Once in the United States, passengers must undergo another 14-day quarantine at either Travis or Joint Base San Antonio-Lackland in Texas, the CDC statement said. “We understand this is frustrating and an adjustment, but these measures are consistent with the careful policies we have instituted to limit the potential spread of the disease,” the Embassy’s email to passengers said. Americans from the Diamond Princess will join more than 600 people undergoing quarantine on stateside military bases after evacuations from Wuhan, China, where the coronavirus was first recorded Dec. 31, according to the CDC. However, they will be housed separately. There are no vaccinations for the coronavirus, whose symptoms include fever, cough and shortness and breath. The World Health Organization on Saturday said 1,524 of the more than 50,054 people infected in China have died. Outside the country, 526 are infected and two have died — one in Japan and the other in the Philippines. On Thursday, one person quarantined at Lackland tested positive for the coronavirus, bringing the number of Americans infected to 15, according to the CDC. On Wednesday, officials released 195 people from quarantine at March Air Reserve Base in Riverside County, Calif.doornbos.caitlin@stripes.com Twitter: @CaitlinDoornbos