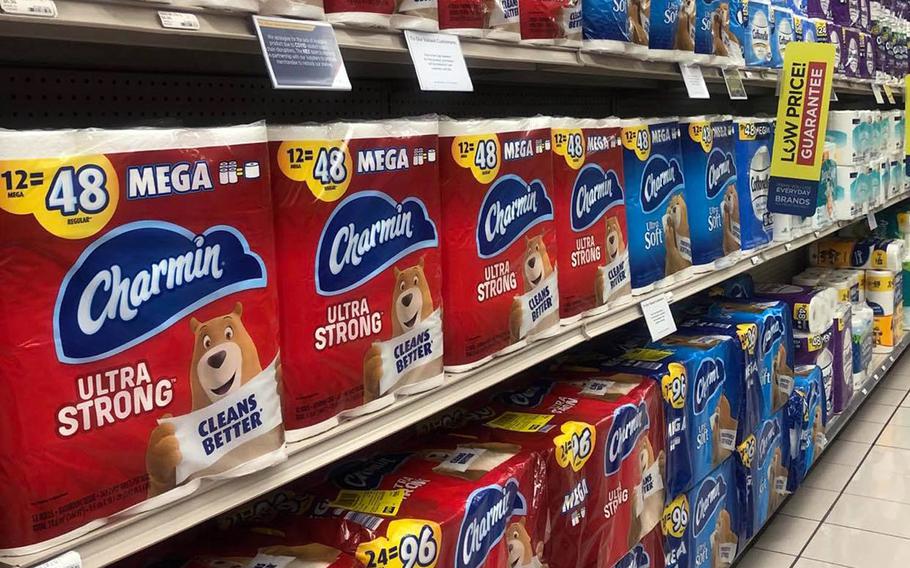 EDITOR'S NOTE: This story has been updated.

Residents of at least one American military installation in Japan may have to purchase Japanese toilet paper to keep their plumbing working properly, according to the housing maintenance office.

American multi-ply toilet paper brands are to blame for frequently clogged pipes on Yokota Air Base, Amy Moses, operator of the tower maintenance department on Yokota, told Stars and Stripes in a phone call Monday. Yokota, in western Tokyo, is the headquarters for U.S. Forces Japan, 5th Air Force and the 374th Airlift Wing.

“We aren’t trying to take business away from the exchange or commissary,” she said. “But it saves a lot of work and frustration for everyone in the long run if you don’t use that toilet paper.”

Over time, thick toilet paper brands can back up in the septic system and lead to flooding and clogged drains that affect the bathtub and sink, Moses said. She said Japanese brands are designed to dissolve faster than American brands.

Moses said anyone unwilling to surrender their favorite brands of creature comfort should be stingy with the amount of tissue they employ and flush the toilet twice after using it. That will use more water, which is a good reason to reconsider your choice in toilet paper, she said.

Moses said she gets as many as eight calls per day about clogged plumbing, often repeat calls from the same residents.

“If people want to keep using the American brand they like, that’s fine, but eventually they’re going to have issues,” she said. “It gets really bad and even floods people’s master bedrooms.”

Yokota resident and post office volunteer Tammy Jenkins said she has firsthand experience with a flooded toilet. After the third time her bathroom flooded since February 2020, tower maintenance told her American toilet paper was the problem.

“At first I thought they were joking,” she said. “But it’s worth going off base for Japanese brands if it means not having an overflowing toilet.”

Jenkins, who said she got used to buying family-sized packages of American toilet paper after the coronavirus pandemic spurred a shortage last year, intends to give Japanese brands a try.

“It would have just been nice to know when I first got here,” she said. “I do a lot of shopping off base anyway, so I really don’t mind. I just wish I didn’t have to find out this way.”

Moses said the tower maintenance office is planning to address the toilet paper issue at newcomers’ orientations in the future.

At Kadena Air Base on Okinawa and Yokosuka Naval Base south of Tokyo, American-brand toilet paper is not an issue, sources there said.

“It is not a requirement here to use Japanese toilet paper,” Yokosuka spokesman Randall Baucom told Stars and Stripes by phone Wednesday. “However, residents should stop using disposable wipes, or put them in the trash can rather than flushing them.”