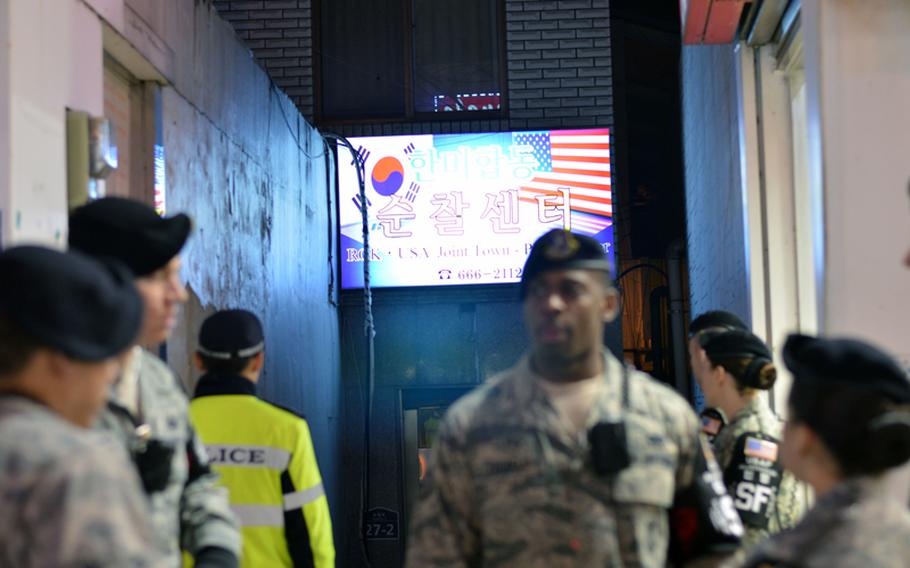 Members of the Osan Air Base joint town patrol pause to discuss what they had seen in front of the Shinjang Shopping Mall, just outside the front gate of the base in South Korea, March 16, 2013. The patrol includes members of the 51st Security Forces Squadron and South Korean police. (Armando R. Limon/Stars and Stripes)

Members of the Osan Air Base joint town patrol pause to discuss what they had seen in front of the Shinjang Shopping Mall, just outside the front gate of the base in South Korea, March 16, 2013. The patrol includes members of the 51st Security Forces Squadron and South Korean police. (Armando R. Limon/Stars and Stripes) 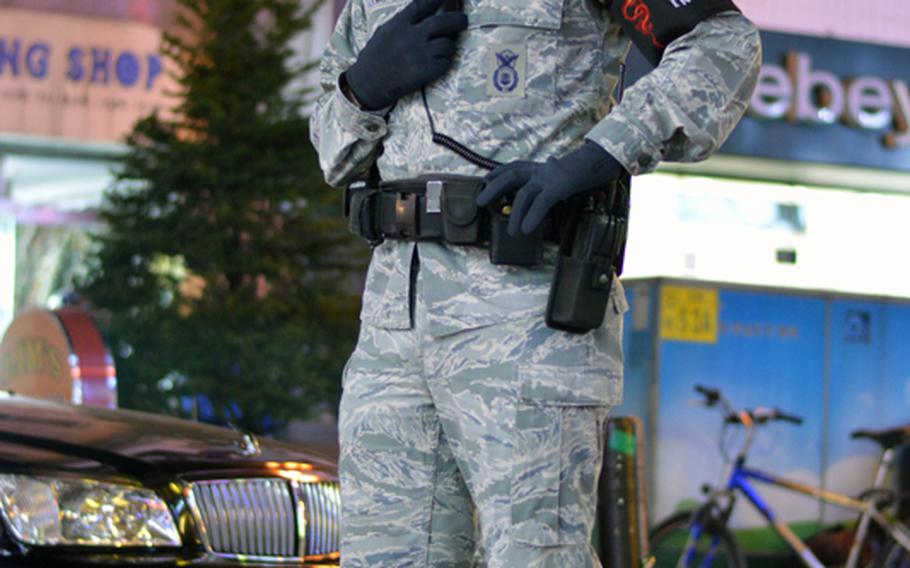 A member of the Osan Air Base joint town patrol observes U.S. servicemembers and local nations at the Shinjang Shopping Mall, the entertainment district just outside the front gate of Osan Air Base in South Korea, on March 16, 2013. (Armando R. Limon/Stars and Stripes)

SEOUL — Officials from 7th Air Force have filed paperwork saying seven airmen were acting in an official capacity when they handcuffed several Koreans near Osan Air Base a year ago, an incident that has caused an unprecedented legal rift between the two countries.

At issue is whether the airmen, who were conducting a routine town patrol, had any legal authority to detain three Korean men after one of them reportedly refused to move his illegally parked car from a street just outside Osan in the Sinjang pedestrian shopping area.

Osan officials have said the airmen believed the car posed a force protection threat because it was parked about 100 to 150 yards outside the base. South Korean authorities said the car was too far away to pose a credible danger.

The detained men were released after South Korean police arrived and were not charged. However, cell phone footage of the incident last July 5 aired widely in South Korea, prompting outrage over what was seen as the military overstepping its bounds. U.S. military officials quickly apologized.

Maj. Richelle Dowdell, 7th Air Force spokeswoman, said a military investigation of the incident found “some lapses in judgment and missed opportunities to disengage and deescalate the situation” but that all of the airmen acted in accordance with their duties and previous training.

South Korean authorities have rejected the military’s findings. After the 7th Air Force filed documents known as Official Duty Certificates on Friday to South Korea’s Ministry of Justice, the Pyeongtaek prosecutor’s office filed an objection, arguing that the airmen’s actions fell outside the scope of their military duties.

That would place the case under South Korean jurisdiction, opening the door to possible criminal prosecution.

The objection is the first of its kind filed by South Korea and triggers what could be a series of bilateral consultations, starting with military and legal officials that, if not resolved within several weeks, would be taken up in diplomatic discussions.

According to the status of forces agreement between the two countries, the U.S. has jurisdiction over troops for incidents that take place while they are on duty. Aspects of the SOFA relating to jurisdiction have long been a sore point in South Korea, where the document is perceived as allowing servicemembers to behave with impunity.

Under the SOFA and related rules and regulations, U.S. military personnel can conduct patrols outside their installations to maintain order and discipline among troops and to monitor U.S. military facilities but are not allowed to enforce South Korean law and can take police action only in case of threat to military property or facilities.

USFK has acknowledged that rules on the military’s policing authority could be misinterpreted.

The chief prosecutor in Pyeongtaek has not returned numerous calls from Stars and Stripes for more than a week seeking comment on why the case has not been resolved. The prosecutor’s office issued a statement Friday saying Korean officials have conducted a “thorough” investigation with interviews of 15 people and review of CCTV footage of the incident.

It also said prosecutors told the military that it planned to press charges against the airmen, though it was not clear when that exchange took place. South Korean authorities have said the airmen should be indicted for making illegal arrests.

The separate U.S. investigation was completed by last October but military officials have not released its findings, saying they were waiting for South Korea to finish its work.

The airmen quietly left South Korea months ago for other assignments. They will probably never face charges or be handed over to stand trial, said attorney Park Sang Yung, who was chief of the Pyeongtaek Police Department when the handcuffing took place and advocated charges.

Five of the airmen were suspended from town patrol duties during the investigation, which Dowdell described as an administrative but not punitive action. Two of the airmen were punished for possible “lapses in judgment” severely enough that their careers will be affected, she said without providing specifics, citing privacy regulations.

She said the U.S. and South Korea have put additional training and patrol procedures in place to prevent similar incidents.