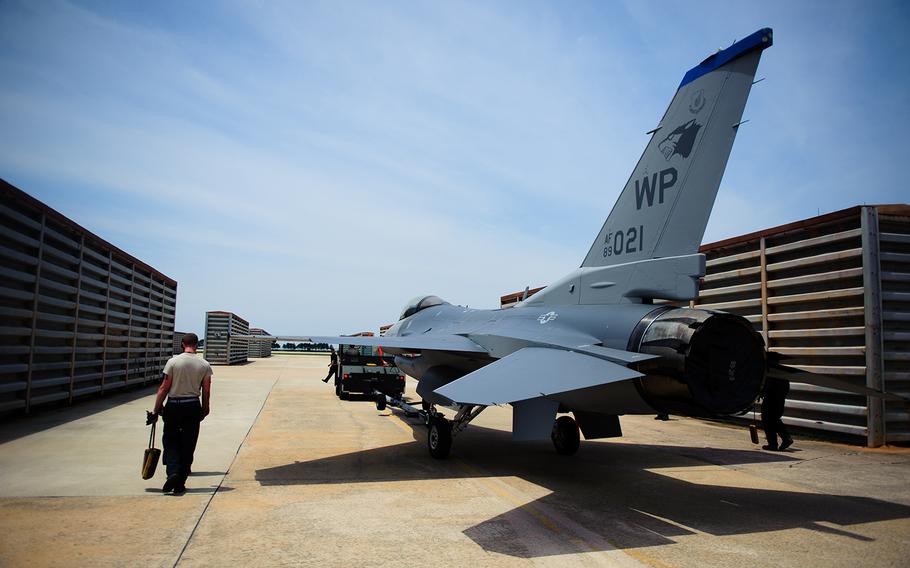 An F-16 Fighting Falcon is taken back to the flight line after a full paint job in 2014 at Kunsan Air Base, South Korea. (Armando Schwier-Morales/U.S. Air Force)

OSAN AIR BASE, South Korea — An airman found dead this week at Kunsan Air Base served as a section chief for the 8th Maintenance Squadron, the 8th Fighter Wing announced Wednesday.

Tech Sgt. Joshua Arndt, 35, was found unresponsive in his dorm room just before 9 a.m. Monday and pronounced dead 20 minutes later, according to statements issued by the wing. His death is under investigation.

“We are deeply saddened by the loss of Tech. Sgt. Arndt,” said Col. Christopher Hammond, commander of 8th Fighter Wing, according to the wing. “On behalf of the Wolf Pack, I offer our sincerest condolences to his family, friends and fellow Airmen.”

Arndt was one of nearly 4,600 airmen selected this month for advancement to the rank of master sergeant.

“Joshua immediately made an impression on those around him as he diligently led his section and worked to improve the unit, while making those around him better,” said Maj. Bryan Kloepper, squadron commander, according to the wing. “The love, care and friendship he offered those around him are irreplaceable, and we’ll never forget his friendly, welcoming smile. He made a lasting impact on us all and will truly be missed.”

Kunsan Air Base is 112 miles south of Seoul on the west coast of the Korean Peninsula. It is home to two squadrons of F-16 Fighting Falcons and other units.