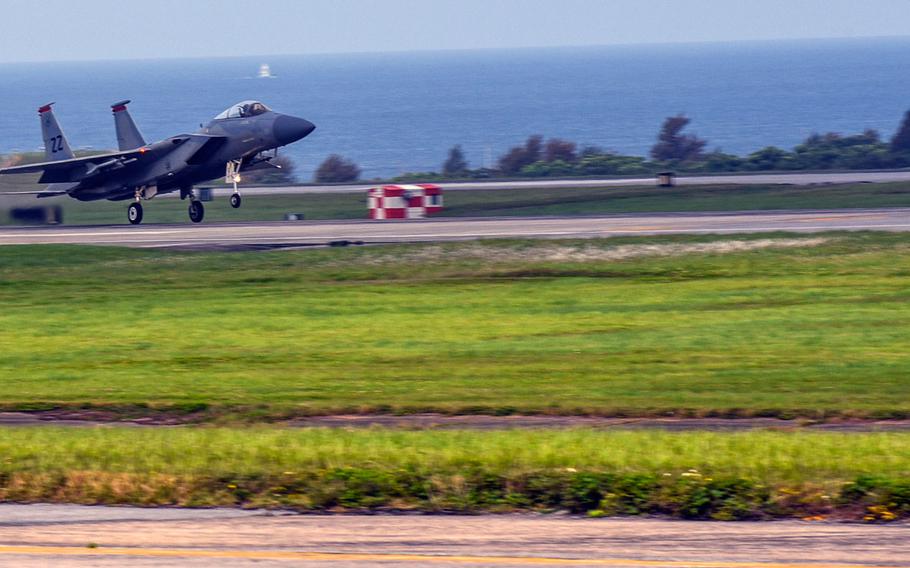 CAMP FOSTER, Okinawa — An Air Force pilot was in “serious condition” Monday after a fighter jet crashed into waters south of Okinawa in southern Japan.

The pilot of an F-15C Eagle from Kadena Air Base “successfully ejected and was safely recovered” by the crew of a Japan Air Self-Defense Force helicopter, according to statements from the Air Force and the Okinawa Defense Bureau. The incident happened at about 6:36 a.m. local time during a routine training mission.

The pilot was taken to the U.S. Naval Hospital at Camp Foster, according to Kadena’s official Twitter account, which later said the pilot was in serious condition.

“Our hearts and prayers go to the pilot and his family as they go through this difficult time,” a post said.

“I sincerely appreciate the strong support of our Japanese partners in this difficult situation,” he said in an 18th Wing statement issued Monday evening.

The cause of the mishap is unknown, the wing statement said. A board of officers will conduct a “thorough investigation, examining the facts and circumstances that led up to the accident.”

After Monday’s incident, Japanese Defense Minister Itsunori Onodera once again called on the U.S. military to ensure the safety of its aircraft and prevent future occurrences.

“Accidents of U.S. military aircraft are occurring repeatedly,” he said, according to the Kyodo news agency. “We would like to continue asking for their flight safety.”

Onodera said he hopes to obtain a detailed report on the crash, because the JASDF also flies F-15s.

Okinawa government officials asked the U.S. military to suspend F-15 flights until their safety could be confirmed, Kyodo reported. They are also expected to lodge formal protests with the U.S. military.

Okinawa’s anti-base Gov. Takeshi Onaga called such incidents a threat to Okinawa’s future, according to the Kyodo report.

“We cannot fulfill our responsibilities for our children and their children if such a situation becomes the norm,” he said.

In March, Japanese officials called on the U.S. military to provide information after an antenna fell from an Okinawa-based F-15 on Feb. 27. The part measured approximately 15 inches by 6 inches and weighed about 3 pounds.

The F-15 is the Air Force’s legacy air superiority fighter and costs $29.9 million per jet.

Stars and Stripes correspondent Aya Ichihashi contributed to this report.bolinger.james@stripes.comburke.matt@stripes.com