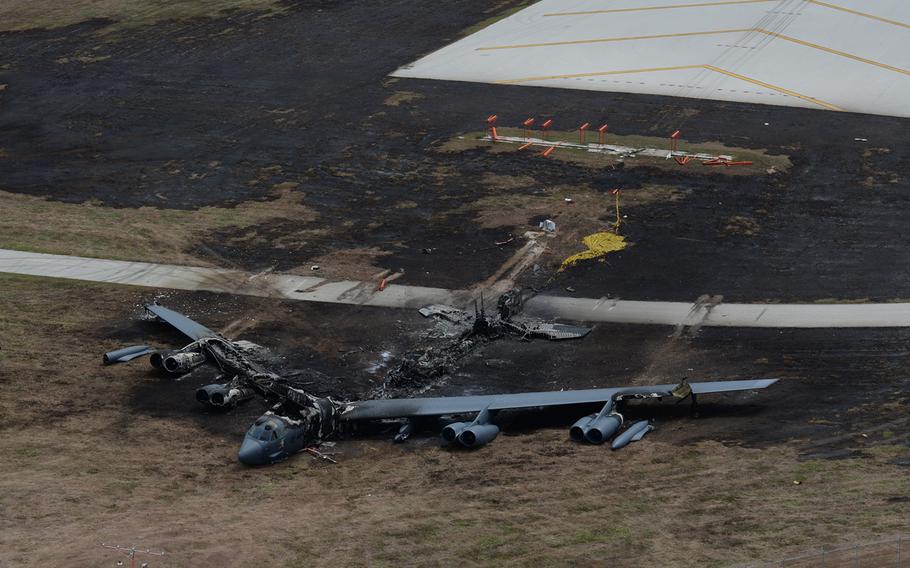 A B-52H was destroyed in a fire after an aborted takeoff at Andersen Air Force Base in Guam on May 19, 2016. The Air Force determined in a recently released investigation the incident was caused by mechanical failures. The incident resulted in minor injury to one crew member and no fatalities. (U.S. Air Force photo)

SAN ANTONIO — A B-52H Stratofortress was destroyed in Guam last year in a fire shortly after an aborted takeoff due to mechanical failures and the possibility that bird strikes might have damaged the engines of the aircraft as it sped down the runway, an Air Force investigation has concluded.

One of the seven crew members sustained minor injuries in the incident, which began when the engines experienced thrust failure as the plane took off during a routine training mission at Andersen Air Force Base in Guam, an Accident Investigation Board from the Air Force Global Strike Command concluded last week.

The investigators concluded pilot error did not contribute to the incident on May 19, 2016, which resulted in a fire and complete destruction of the aircraft worth $112 million.

In a summary of the incident, the report stated the pilot of the aircraft from the 69th Expeditionary Bomb Squadron, 5th Bomb Wing assigned to Andersen, observed birds at wing level seconds after the pilot announced the plane was committed to takeoff procedures.

The co-pilot then felt “a couple thuds” on the right side of the aircraft as three of the four engines began “spooling back,” or slowing down, according to the report. A spike in oil pressure indicated likely failure in the fourth engine as the plane yawned to the right, which pointed to loss of thrust, the report stated.

The pilot began aborted takeoff procedures by shutting off outboard engines and applying brakes as the co-pilot deployed a drag chute to slow the aircraft as it quickly approached the end of the runway.

The plane’s chute failed to fully inflate, and the aircraft’s landing gear and right-wing tip gear were sheared off before it came to a stop 300 feet past the runway, the report stated. Then the plane caught fire as the crew escaped through a hatch.

The failed deployment of the chute and “exceeding brake energy limits” were significant factors that contributed to the incident, according to the report.

Bird strikes on aircraft, often called bird ingestion when they fly into engines, are a significant safety hazard, and airmen at installations carefully monitor migration patterns to anticipate and minimize incidents. The report stated the threat of bird strikes was considered low at Andersen at the time of the incident.

Though the crew visually identified birds near the wing at the time of the incident, there was no conclusive evidence a bird strike had occurred, said Capt. Michele Rollins, a public affairs spokeswoman for Air Force Global Strike Command.

The aircraft was deployed to Andersen from Minot Air Force Base in North Dakota as part of the Pentagon’s continuous bomber mission in the Pacific, an Air Force release stated.

With a 70,000-pound payload capacity, the B-52 is a decades-old aircraft and the workhorse of Vietnam and post-Cold War campaigns, with use in the first Gulf War, Afghanistan and Iraq, most recently in bombing sorties against the Islamic State.