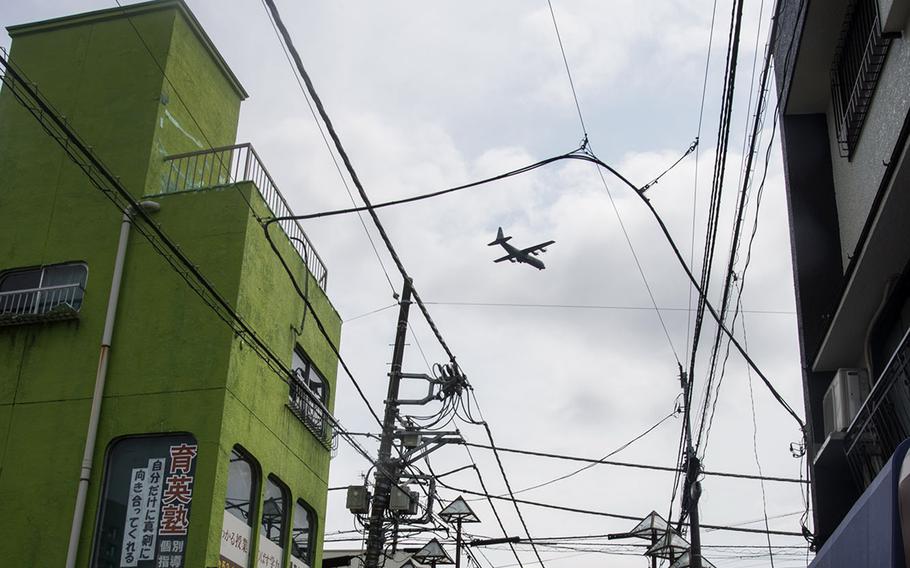 Buy Photo
A C-130J Super Hercules assigned to Yokota Air Base in western Tokyo flies over the nearby city of Fussa, April 17, 2020. (Theron Godbold/Stars and Stripes)

YOKOTA AIR BASE, Japan — People who live or work at the home of U.S. Forces Japan in western Tokyo have been authorized to travel much of the country’s main island in time for Independence Day, although Tokyo Disneyland and popular nightlife districts in the capital remain off-limits.

New 374th Airlift Wing commander Col. Andrew Campbell on Tuesday expanded the area where Yokota community members are authorized to roam. Troops, family members, civilian workers, contractors and Japanese employees at the base had been ordered to stay at home or close to the base since late March to slow the coronavirus’ spread.

“Our local area is defined as the island of Honshu (mainland Japan) excluding the Tokyo metropolitan area and the Yokohama metropolitan area which are still prohibited,” Campbell wrote in a Tuesday memo. “Members are also authorized to visit other military installations within the local area.”

Areas in central Tokyo, such as Shibuya, Shinjuku and Roppongi, are still a no-go, he added. They also remain barred from visiting other Japanese islands, such as Okinawa, Hokkaido, Kyushu and Shikoku.

Compared to the United States or Europe, Japan has seen relatively few cases of the coronavirus – about 19,000 total infections and 1,000 deaths. Tokyo, which confirmed 58 new cases on Monday, has seen an uptick in infections since Prime Minister Shinzo Abe lifted a state of emergency there on May 25.

For example, U.S. Army Japan gave a green light Friday for troops, civilian workers and their families at Camp Zama and other bases in Kanagawa prefecture, near Japan’s capital, to go almost anywhere in the country other than Hokkaido, areas of Tokyo, Yokohama and Kawasaki.

On June 15, Yokota reported its first coronavirus case among local base personnel, although an undisclosed number of Navy sailors tested positive in late April. A group of sailors was sequestered at the installation before boarding warships of the USS Ronald Reagan strike group for its patrol of the Western Pacific.

In May, the Air Force revealed that an undisclosed number of support staff accompanying the sequestered sailors had also tested positive.

Public trains and buses may only be used for travel to work, school or daycare when private transportation is unavailable or impractical, he said.

Yokota personnel also must limit gathering to 20 people or fewer, although squadron commanders can approve gatherings of up to 50 people, Campbell added.

“An exception to the public gathering requirements is allowed for attendance at off-installation religious services so long as attendance can be conducted in a safe manner,” he wrote. “Those wishing to attend such services off-installation must exercise caution such as physically distancing requirements and wearing masks except for short duration to take part in religious rituals/rights/observances that require consumption.”