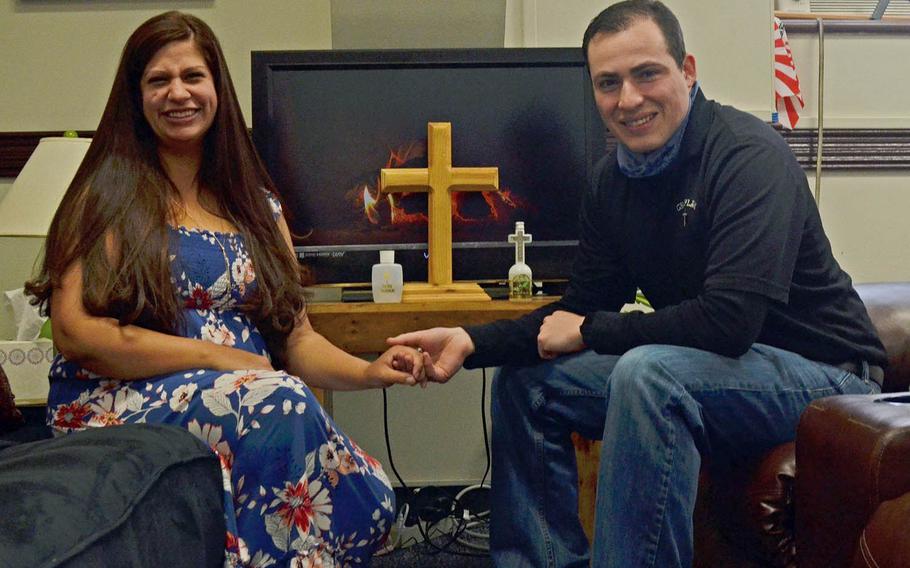 Chaplain (Capt.) Lance Brown, of the 374th Wing Staff Agency at Yokota Air Base in Tokyo, and his wife, Karen Brown, have been performing cleanses, or anointings, for the past eight years in homes where "odd things occur." (Erica Earl/Stars and Stripes)

Chaplain (Capt.) Lance Brown, of the 374th Wing Staff Agency at Yokota Air Base in Tokyo, and his wife, Karen Brown, have been performing cleanses, or anointings, for the past eight years in homes where "odd things occur." (Erica Earl/Stars and Stripes) 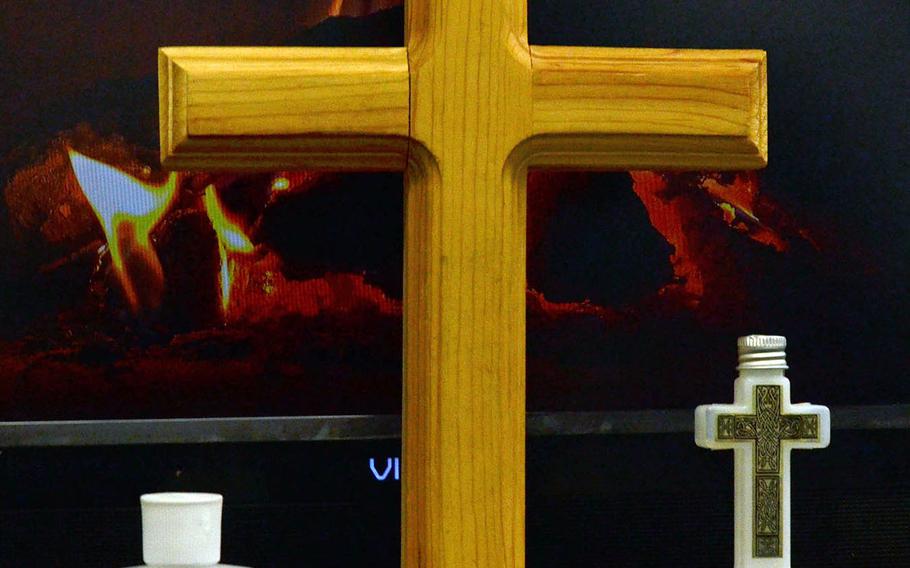 YOKOTA AIR BASE, Japan — The headquarters of U.S. Forces Japan may also be home to supernatural activity, according to a couple who claim to help anyone dealing with paranormal disturbances to rid their homes of unwanted spirits.

Chaplain (Capt.) Lance Brown, of Yokota’s 374th Wing Staff Agency, and his wife, Karen Brown, who is working on a master’s in counseling, have been performing home cleanses, or anointings, for the past eight years in homes where “odd things occur.”

Supernatural activity is reported so often at this base in western Tokyo that it inspired a Facebook group, Yokota Ghost Hunter Club. Its members post about paranormal phenomena they’ve experienced at their homes and workplaces.

Lance is endorsed by the Pentecostal Church of God, and the home cleanses are not officially sanctioned by the Air Force, he told Stars and Stripes in an interview March 1.

“Ghosts or spiritual demonic activity, things of an evil nature, God combats that,” he said. “We have the ability to be that beacon of hope as people invite us.”

The Browns said their cleansings are sometimes about helping someone cope with anxiety, heartbreak or a troubled past than about literal evil spirits, though Lance said they are not suggesting the supposed presence of spirits is “all in the person’s head.”

Laurie Pope, who lives in one of Yokota’s garden units, said she started to feel uncomfortable in her home last year.

“My 3-year-old daughter has been experiencing sleep regression the past year,” she told Stars and Stripes over Facebook Messenger on March 1. “There have been several times when I would be watching her video monitor and I would see orbs of light in her room. There have been a few instances where I’d be in my bedroom and I would see a white streak of light run past the foot of my bed. And, more recently, my daughter has been saying she’s seeing monsters and that she’s scared.”

Pope and her husband, Master Sgt. Austin Pope of the 374th Maintenance Squadron, decided that since Laurie is six months pregnant, they needed to do something to help their daughter feel less afraid and sleep through the night before bringing a new baby home.

The family found the Browns on Facebook, and, despite not identifying with any religion, decided to give it a try.

“I know it won’t happen overnight, but I’m hoping we can all live more comfortably in our home regardless if there was a spirit existing here,” Laurie said.

The Browns’ anointing process starts with talking to the family about what is happening at home.

“We discuss what they are seeing, hearing and sensing to determine if it’s just a creaky house or if something evil is going on here,” Lance said. “Some people call it a ‘spidey sense,’ but we refer to it as a discernment of spirits, a heightened sense of things that are different or off.”

They then apply anointing oil — a mixture of frankincense, myrrh, aloes and herbs — to anything that needs to be blessed, including people and objects. They also use incense and holy water.

“It’s not as intense as movies like ‘The Exorcist’ or anything like that,” Karen said. “After we have left, the situation has never gotten worse, ever.”

The Popes, who had their home anointed March 1, are hopeful that the process worked for her family.

“My daughter still isn’t sleeping through the night,” Laurie said. “But I feel a much greater sense of peace being home alone, especially at night.”

The Browns do the cleanses free of cost, judgment or disclosure, they said. People need not be religious to have a home cleansing, and the Browns said their objective is not to convert anyone’s belief systems.

The couple said they received more calls at Yokota over the past year than they did at their previous assignment in Fort McConnell Air Force Base, Kansas. The Browns weren’t certain exactly how many calls they have received on Yokota but explained that they receive a steady flow of requests, and had a cleansing arranged for right after their interview with Stars and Stripes.

Belief in hauntings, dark spirits and exorcisms is rooted in several factors, including religious beliefs about the afterlife and people’s desire to connect and find patterns and significance in unusual or seemingly inexplicable incidents, according to Michael Shermer, a science historian and the founder of The Skeptics Society in Altadena, Calif.

“Incidents seem significant when you are looking for it,” he said in a phone interview on March 9.

The uncertainty and restrictions associated with the yearlong coronavirus pandemic possibly amplifies stress and emotion, Lance said. Add to that the feeling of isolation and separation from family and friends that comes with living in a foreign country.

“These feelings can make someone more heightened to portals for spiritual activity,” Lance said.

The Browns declined to share the details of specific cleansings, but said they have experienced fear and emotional responses themselves during some visits.

“It’s not anything of Hollywood, but evil is a very real thing,” Lance said. “You just sense an absolute darkness, and your skin tingles and the hair on the back of your neck raises and you get a sense of ‘I don’t want to be here.’”