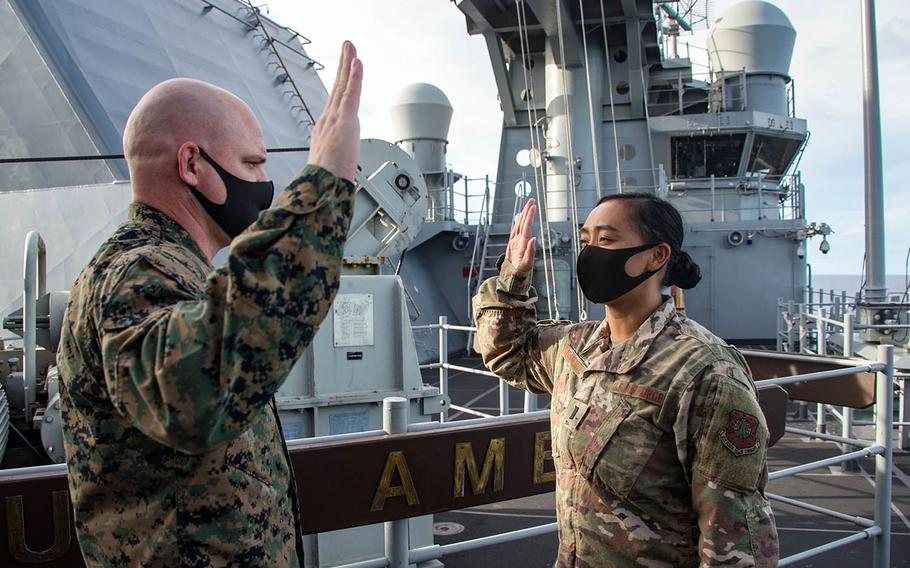 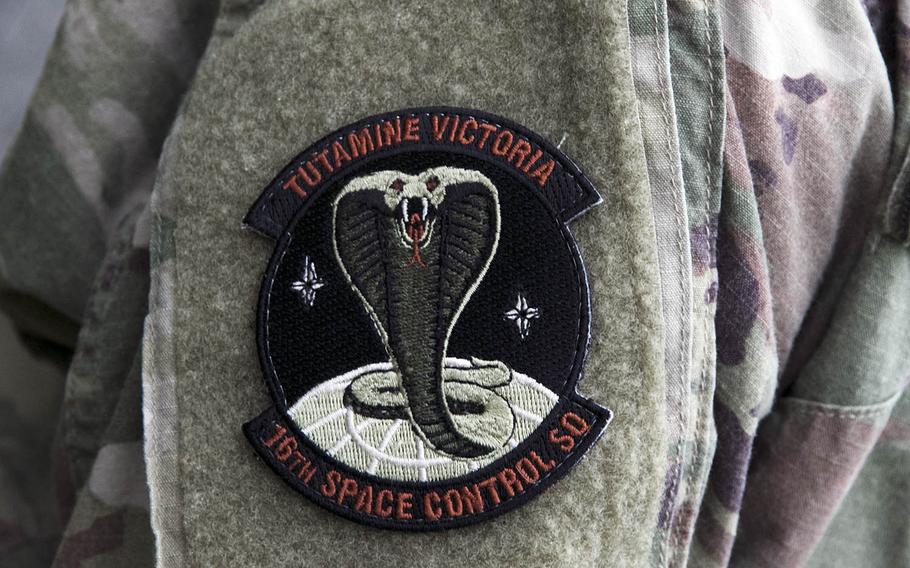 Buy Photo
Air Force 1st Lt. Rio Sarmiento was set to make history in mid-August when she boarded the amphibious assault ship USS America in Japan and headed out to sea with the 31st Marine Expeditionary Unit. She transferred from the Air Force Space Command, she said, to be among the first to wear the Space Force patch. (Matt Burke/Stars and Stripes)

CAMP FOSTER, Okinawa — Air Force 1st Lt. Rio Sarmiento was set to make history in mid-August when she boarded the amphibious assault ship USS America in Japan and headed out to sea with the 31st Marine Expeditionary Unit.

The 26-year-old space electronic warfare officer from Parker, Colo., was sworn into the Space Force on Sept. 17 during the two-month patrol and became the new service’s first liaison officer deployed at sea with an MEU.

An affable and easy going “space professional,” the term preferred by Space Force members, Sarmiento is assigned to the 16th Space Control Squadron at Peterson Air Force Base, Colo. She transferred from the Air Force Space Command, she said, to be among the first to wear the Space Force patch.

“We’ve been doing this mission for years, right, so nothing tactically, operationally really changes,” she said during an Oct. 23 interview at Camp Hansen after the America returned to its homeport at Sasebo Naval Base, Japan. “By establishing a new military branch, it just allows us to have more resources and perhaps more manpower, since it is becoming a bigger thing that we need to make more of a priority.”

Space Force, a separate military branch created within the Department of the Air Force on Dec. 21, has attracted approximately 2,000 service members, most of whom transferred from the Air Force.

Aboard the America, Sarmiento’s job was to familiarize Marines and sailors with the Space Force, its mission and what assets it has available to them, she said.

Bounty Hunter uses antennas to monitor the UHF and SHF portion of the electromagnetic spectrum to detect threats to U.S. military space assets; it is often used in conjunction with other systems, according to 2019 Air Force budget documents.

It not only defends U.S. space control, it also actively searches for and anticipates patterns of interference before they appear, thus preventing “adversary use of command, control, communications, computers, and intelligence,” according to the Air Force.

Sarmiento said the patrol was a great experience. She was swarmed by sailors and Marines asking her about the Space Force, but not without some humor.

“I got all different types of reactions,” she said. “Some people, they’d look at me, and literally think I had this on as a joke.”

Her participation in the America patrol “was a huge milestone for my family,” she said, and a win for Asians and for women. It also vindicates her grandfather’s Navy service.

Both of her grandfathers served during World War II, and one, Army Sgt. Julian Sarmiento, was awarded the Bronze Star for surviving the Bataan Death March. However, the other, Steward First Class Jimmy Tadio, who served in the Navy, was only allowed to be a cook because of his Filipino ancestry, Sarmiento said.

“Having my family see that accomplishment that happened on the ship was huge because they fought for us to have a good life in the States, and here we are now,” she said. “It kind of goes full circle. This time, it’s his granddaughter being a Space Force officer.”