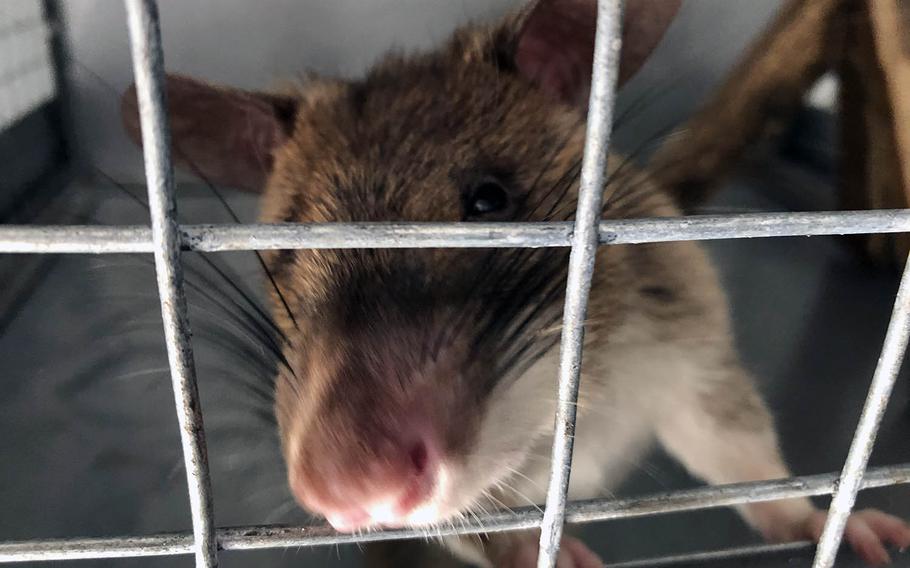 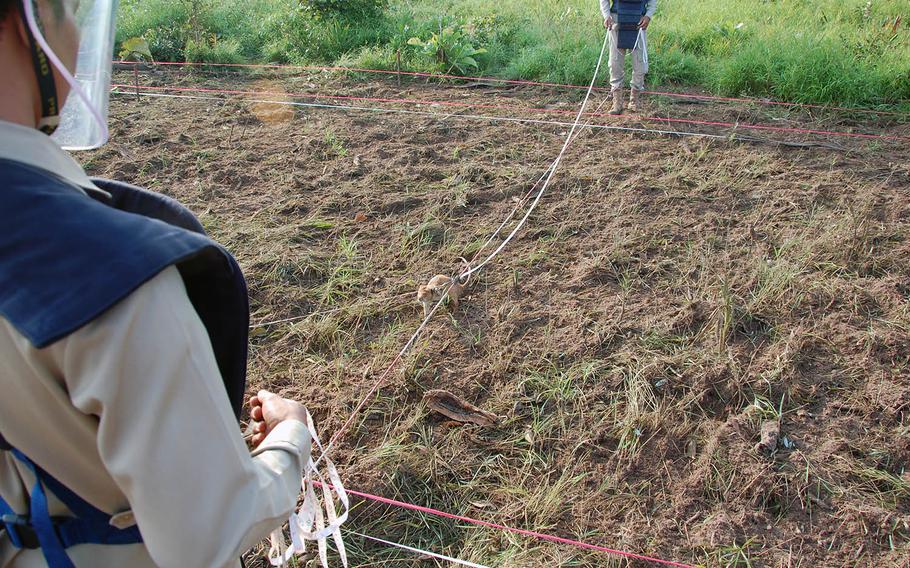 An African pouch rat makes its way between two handlers on a suspected minefield in Cambodia on Nov. 6, 2019. (Joseph Ditzler/Stars and Stripes) 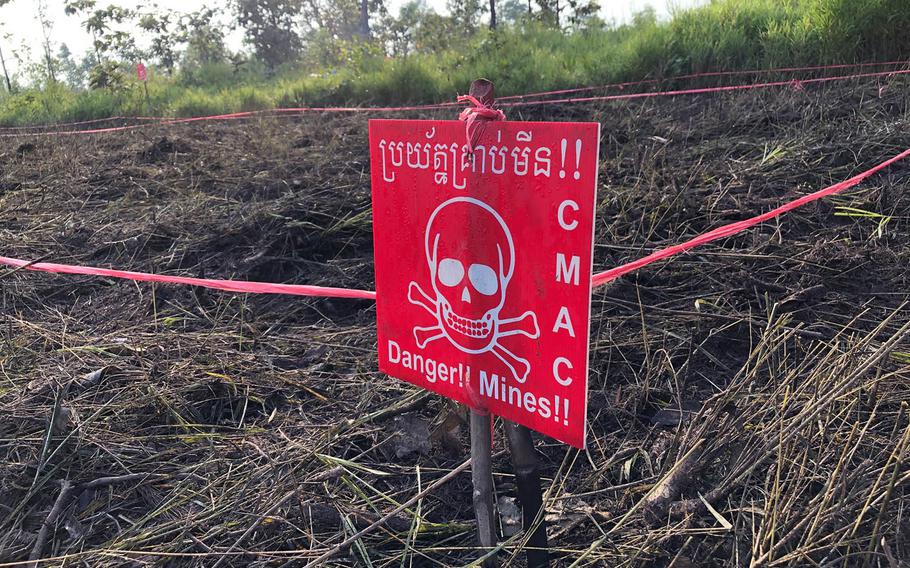 A warning sign marks the edge of a suspected minefield in the countryside north of Siem Reap, Cambodia, on Nov. 6, 2019. (Joseph Ditzler/Stars and Stripes) 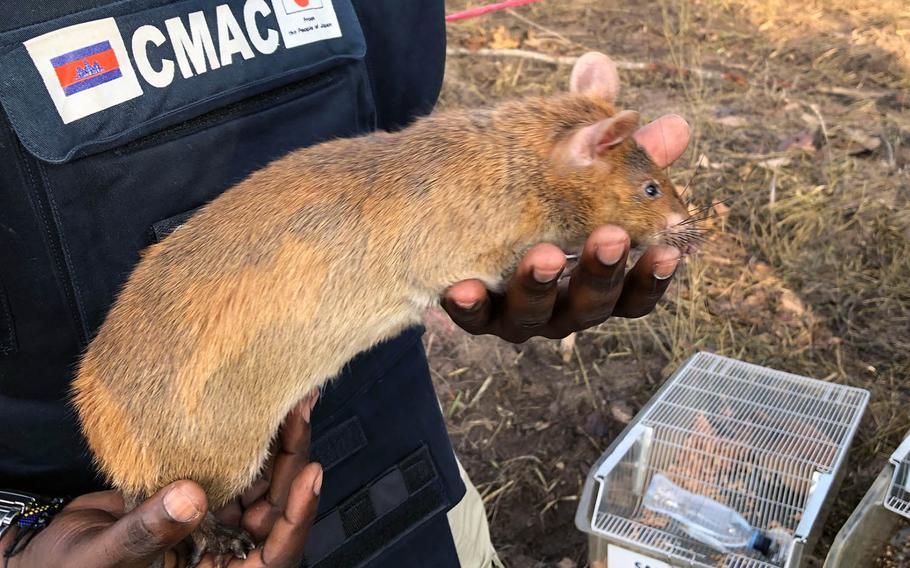 Mark Shukuru, senior technical adviser with APOPO, pulls an African pouch rat from its carrier at a work site in Cambodia on Nov. 6, 2019. (Joseph Ditzler/Stars and Stripes) An African pouch rat sniffs for landmines in a suspected minefield in a rural area north of Siem Reap, Cambodia, on Nov. 6, 2016. (Joseph Ditzler/Stars and Stripes) 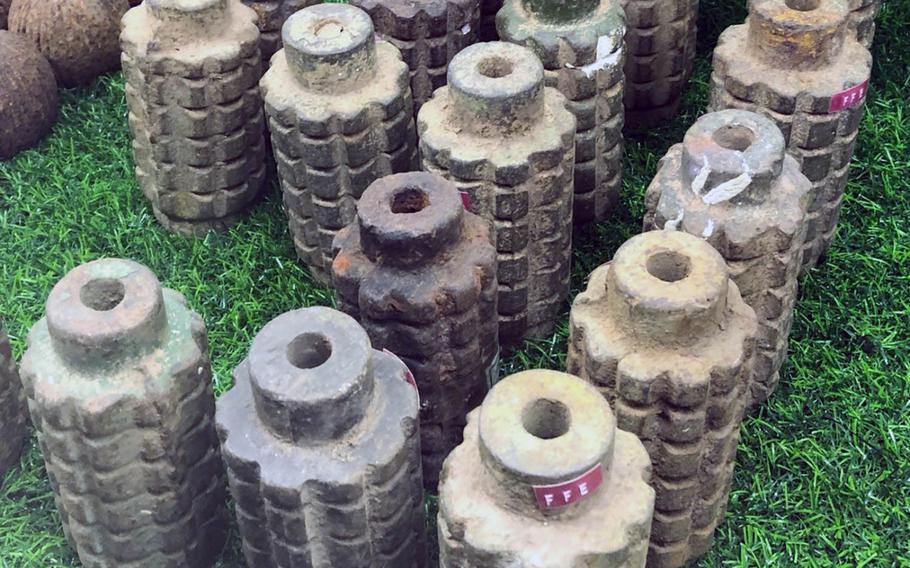 Fragmentation landmines recovered from fields in Cambodia are displayed at the Peace Museum of Mine Action north of Siem Reap on Nov. 6, 2019. (Joseph Ditzler/Stars and Stripes)

SIEM REAP, Cambodia — An hour’s drive north on Route 66, beyond the tourist gaggle at the temple complex around Angkor Wat, work goes on to clear away the vestiges of three decades of war.

The key workers — African giant pouch rats — keep their noses on the job. This year in Cambodia, the rats and their human handlers have cleared hundreds of acres of landmines and unexploded munitions, making way for local farmers.

In early November, the teams were finishing up 70 acres just off the highway and past a two-room, wooden Cambodian farmhouse on stilts, over a muddy pasture and through a grove of cashew trees.

“From the time we started working, we’ve already cleared 13.25 hectares,” or 33 acres, said Mark Shukuru, senior technical adviser for APOPO, a nongovernmental agency that trains rats to sniff out mines. “Up till now we’ve pulled 14 mines” and have found nine unexploded ordnances.

APOPO — one of several organizations clearing mines under the auspices of the Cambodian Mine Action Center — expected to finish that site by Nov. 29 and move on to another. The cleared acreage will be handed off in a ceremony Dec. 29 to local Cambodians, said Michael Heiman, APOPO program manager in Cambodia, in an email Nov. 27.

“They are planning to grow mangoes, cashew nuts and rice on the land cleared,” he wrote.

Minefields and other leftover munitions are a diminishing threat in Cambodia, thanks to the Cambodians themselves, nongovernmental agencies and foreign governments — Japan and the United States included. Today, far more Cambodians die in traffic accidents than are killed by landmines.

But they’re still a threat.

From 1979 to 2017, leftover munitions in Cambodia killed nearly 20,000 people and injured an additional 45,000, about half of them children. A 2013 survey found more than 700 square miles of Cambodia was still contaminated by landmines, according to Landmine and Cluster Munition Monitor.

In the late 1960s and early 1970s, the U.S. — one of several combatants at the time — dropped about 2.7 million tons of ordnance there. Some of it still litters the countryside. Since then the U.S. has given more than $114 million to clear mines in Cambodia, according to the State Department.

‘A survival thing’ Founded in Belgium in 1997, APOPO is unique in developing rats as minesweepers, Heiman said.

The rats are very efficient, he said. They alert handlers to the chemical explosives, not the metallic parts that trigger electromagnetic mine detectors. The rats over three years increased APOPO mine-clearing efficiency by about 25%, according to the organization’s 2018 annual report.

Overall, APOPO this year cleared 509 acres in Cambodia, finding and destroying over 600 mines and other unexploded leftovers of war, Heiman wrote.

Although the Cambodian economy grew by an average 8% from 1998 to 2018, its rural population is still mostly poor or just out of poverty, according to the World Bank.

Shukuru, a Tanzanian, has cleared minefields in Angola and Mozambique. He said he sees in Cambodia something he’s not seen elsewhere: Locals deliberately working in minefields.

That’s not uncommon in some mine-riddled, developing countries, Heiman said.

The site being cleared by APOPO in November had been a fortified camp. The minefield showed no pattern. Water sources and obvious cover, such as large trees, were ringed by mines. A site map indicated a lane cleared by the Khmer Rouge to move armored vehicles, where powerful antitank mines might lie.

They’re too small to set off the mines. Their food — apples, bananas, tomatoes, peanuts — is available in local markets. APOPO also uses canines to hunt mines but dog food can be expensive and harder to procure.

An APOPO vehicle can carry only one or two dogs but several rats, plus training the rats takes eight months to a year versus a full year for a dog. And any trained handler can work with any rat; the dogs are paired with specific handlers.

“Normally, in captivity their life span is eight years and it takes us one year to train a rat, so that means we have at least five to six years to use them in operations,” Shukuru said. “When they reach the age of six years, from there most of them are retired.”

The animals are captured wild in Tanzania and bred. The next generation is trained to detect mines. The training success rate is about 93%, Shukuru said.

In the field, the rats work from 6-9:30 a.m., when they’re most alert and before the Cambodian day becomes too hot.

On a typical day, teams of rats and handlers must clear about 3,300 square feet, working pre-marked rectangles of about 1,100 square feet. Each rat works with two handlers per section. Once a rat becomes fatigued, another waiting nearby takes its place.

“They have to work, all of them,” Shukuru said. “Every rat that comes in the day has to work.”

The basic procedure is simple. The handlers stand on either side of the rectangle and the rat moves on a cord back and forth between them, sniffing as it goes. When the rat reaches one side, the handlers take a step sideways and the rat returns to the other side.

If the rat alerts, the handlers mark the spot and move on. A demining team comes by later to remove the landmine if they find one. Random plots are rechecked to guarantee they’re mine-free.

“At the end of the week, we give them a big bunch of food,” Shukuru said. “The seventh day is a holiday. We’re giving them watermelons, sweet potatoes, corn, carrots to enjoy their weekend.”