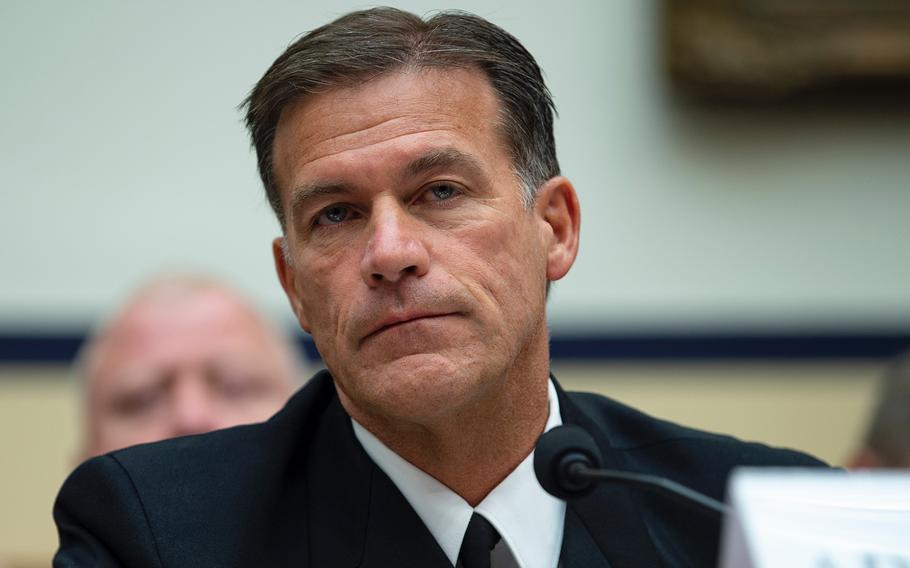 Commander of U.S. Pacific Fleet Adm. John Aquilino attends a House Armed Services Committee hearing on Capitol Hill in Washington on Feb. 26, 2019. Aquilino was nominated Thursday, Dec. 3, 2020, to be the next commander of U.S. Indo-Pacific Command. (Carlos Bongioanni/Stars and Stripes)

WASHINGTON — Adm. John Aquilino was nominated Thursday to be the next commander of U.S. Indo-Pacific Command by acting Defense Secretary Christopher Miller, the Pentagon announced.

Aquilino has led U.S. Pacific Fleet, based in Pearl Harbor, Hawaii, since May 17, 2018. The 1984 graduate of the U.S. Naval Academy would be the 26th commander of INDOPACOM, also based in Hawaii, if confirmed by the Senate.

With President-elect Joe Biden’s administration coming into office in several weeks and the Senate in session until Dec. 18, it’s unclear whether his nomination could be reconsidered or even make it through in time before the next Congress session starts.

Aquilino is a naval aviator, having flown F-14 A/B Tomcats and the F-18 C/E/F Hornet, according to his official biography. He has deployed several times including in support of Operations Enduring Freedom and Iraqi Freedom.

He is also a graduate of the Navy Fighter Weapons School, the Joint Forces Staff College, and the Harvard Kennedy School’s Executive Education Program in National and International Security, according to his biography.

Adm. Philip Davidson, the current INDOPACOM commander, is expected to retire, according to The Wall Street Journal. The command has about 380,000 service members and is responsible for all military activities in the Indo-Pacific region, involving 36 countries and 14 time zones, according to the Pentagon.

One of the biggest crises that occurred during Aquilino’s tenure as the Pacific Fleet commander was the coronavirus outbreak aboard the USS Theodore Roosevelt in March that lead to the death of one sailor.