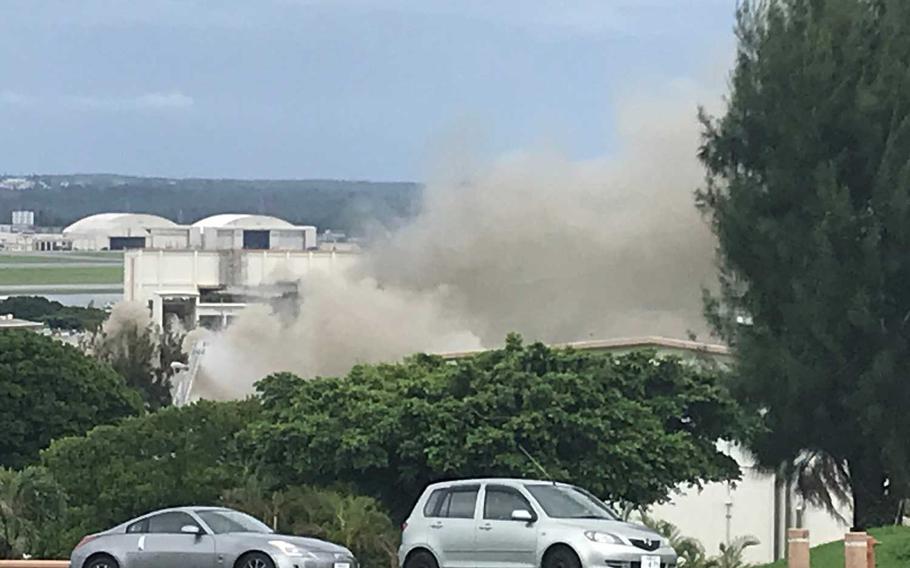 Smoke rises from a fire that started at a hazardous materials building at Kadena Air Base, Japan, Monday, June 22, 2020. (Matthew M. Burke/Stars and Stripes)

Smoke rises from a fire that started at a hazardous materials building at Kadena Air Base, Japan, Monday, June 22, 2020. (Matthew M. Burke/Stars and Stripes) 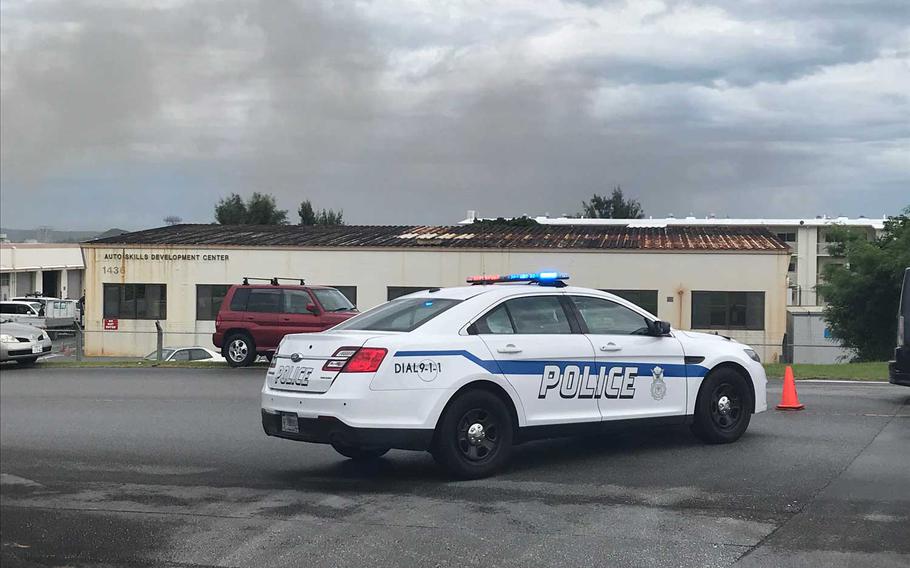 Smoke rises from a blaze that started just before 9 a.m. Monday, June 22, 2020, at the 18th Wing Hazardous Materials Pharmacy on Kadena Air Base. Authorities said it was contained by that afternoon. (Matthew M. Burke/Stars and Stripes)

KADENA AIR BASE, Okinawa – Approximately 45 people were “affected by smoke and/or chlorine gas” after a fire tore through a hazardous materials facility Monday at the home of the 18th Wing on Okinawa.

The blaze, which began around 8:40 a.m. at a building south of Kadena’s airfield in the central part of the base, was extinguished at approximately 2 p.m., according to statements and Facebook posts from the 18th Wing. Thick plumes of smoke smothered areas near the fire and closed off roads as firefighters worked to get it under control.

Authorities evacuated an area 500 feet upwind and 2,000 feet downwind of the site.

Later, the wing announced that the fire had released chlorine gas particles, prompting medical authorities to encourage anyone who experienced breathing or vision problems to seek treatment.

“Those individuals experiencing eye irritation, runny nose, or throat irritation should report to the Kadena Medical Group,” a statement said. “Those with shortness of breath or coughing should call 098-934-5911 or proceed directly to the [U.S. Naval Hospital Okinawa] Emergency Department.”

Those traveling on base were told to keep their windows rolled up and air conditioning off.

Most of the approximately 45 people affected by the smoke and gas experienced "mild symptoms" and were treated and returned to duty, the wing announced Monday evening.

“At this time, the cause of the fire is unknown,” that statement said. “Bioenvironmental personnel and emergency responders remain on the scene to monitor the situation and ensure there’s no safety risk to the community."

Officials from the Okinawa Defense Bureau declined to comment on the fire Monday evening, saying they are still "gathering the necessary information."

Prefectural officials went to the base to observe the fire from outside the fence line, a spokesman said.

“It’s normal for people to feel concerned after hearing that a chemical facility is on fire,” a spokesman said. “We have not heard anyone experiencing any health issues at this moment.”