A new approach to ridding Vietnam of unexploded ordnance Dinh Ngoc Vu, the explosive ordnance disposal operations manager for Project Renew, shows a cluster bomb found at a cleanup site a few miles outside the town of Dong Ha, Quang Tri Province. The bomb, appearing almost identical to a rock, is the round object in front of his left foot just over the safety tape. (Wyatt Olson/Stars and Stripes)

Dinh Ngoc Vu, the explosive ordnance disposal operations manager for Project Renew, shows a cluster bomb found at a cleanup site a few miles outside the town of Dong Ha, Quang Tri Province. The bomb, appearing almost identical to a rock, is the round object in front of his left foot just over the safety tape. (Wyatt Olson/Stars and Stripes) 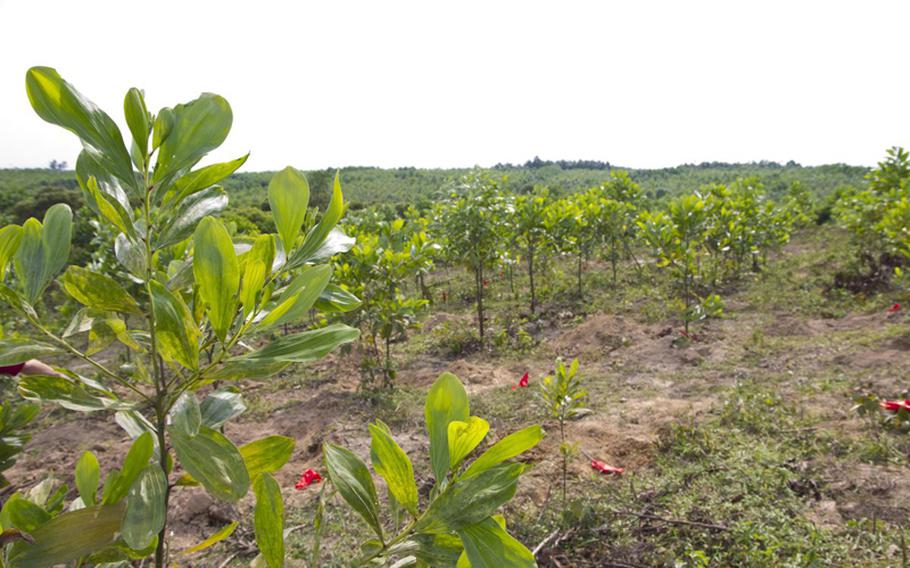 This field near the town of Dong Ha had been cultivated by local farmers for rubber trees, but Project Renew discovered that the area was riddled with unexploded cluster bombs beneath the surface. Each red flag represents what is believed to be a bomb and each must be painstakingly unearthed by hand by technicians. If they are cluster bombs, they will be destroyed with a controlled demolition because they are too unstable to transport. (Wyatt Olson/Stars and Stripes) 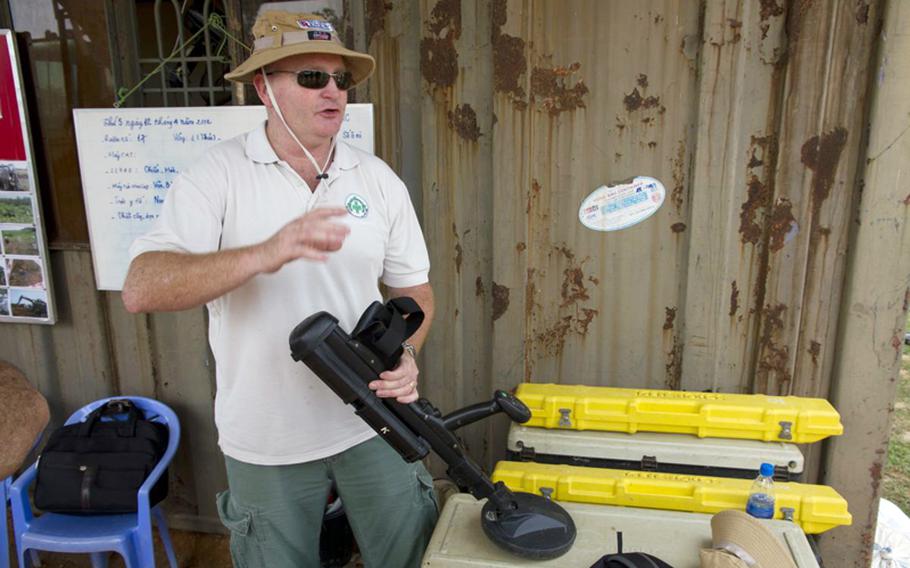 Jonathon Guthrie, country director for Norwegian People's Aid, explains how various kinds of metal detectors are used to find and identify buried UXO. The most dangerous types -- cluster bombs and 40mm grenades -- are usually no deeper than a foot. (Wyatt Olson/Stars and Stripes) These homemade prosthetic limbs were collected by Project Renew, which aids UXO victims with high-quality prosthetics. Some makeshift limbs were fashioned from bombshell casings. (Wyatt Olson/Stars and Stripes) Half of a cluster-bomb casing has been converted into a planter at Project Renew's headquarters in Quang Tri Province. After being dropped from a bomber, cluster-bomb casings like this would blow apart and release hundreds of bomblets. The impact of the casings left large oblong craters in the soil, and UXO cleanup teams now ask locals about such indentations as clues to the location of unexploded cluster bombs. (Wyatt Olson/Stars and Stripes) This clusterbomb was one of thousands cleared in Quang Tri Province since 1975. They are the most deadly UXO legacy of the Vietnam War because of the munition's high failure rate to explode on landing. They lie close to the surface and are easily disturbed by farmers and children playing. (Wyatt Olson/Stars and Stripes) 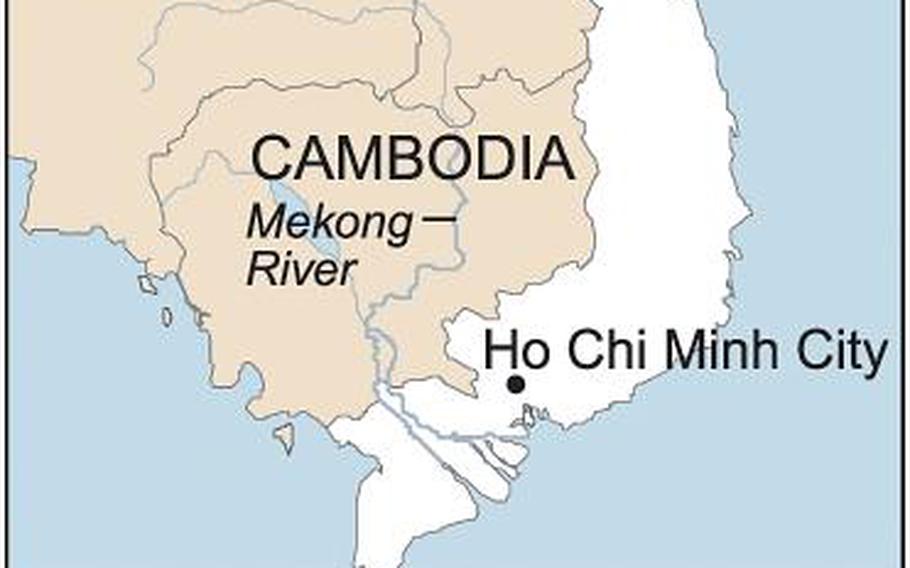 QUANG TRI PROVINCE, Vietnam - When government officials here talk about ridding the country of unexploded ordnance left from the war with America, the timeframe is stunning.

In January, for example, the Vietnam Defense Ministry&rsquo;s Engineer Corps estimated it would take about 300 years to clear it all.

Such pronouncements are gloomy reminders for a country that has experienced devastating losses from unexploded ordnance, or UXO. Since 1975, about 40,000 people have died from explosions, and 66,000 have been injured and maimed, according to the Vietnam Ministry of Labor, Invalids and Social Affairs.

A centuries-long cleanup approach, however, isn&rsquo;t practical for the international agencies involved in the effort because the costs are too great and results too little. But a new concept developed in central Vietnam called &ldquo;land release&rdquo; promises to remove the danger in a much shorter time.

Land release is being used by the organization Project Renew in three districts of Quang Tri province, the most heavily bombed area of the Vietnam War. The concept challenges the idea that every square meter of the country must be decontaminated at a deep level and instead focuses on the most likely danger points, such as planned construction sites and new farmland.

&ldquo;The approach is basically to reduce the amount of effort and the costs and investment in cleaning up areas that really don&rsquo;t need to be cleaned up,&rdquo; said Chuck Searcy, a U.S. veteran of the Vietnam War who returned to the country in the 1990s to work on mitigating the legacy of UXO and the toxic defoliant Agent Orange.

Searcy is an international adviser for Project Renew, a cooperative program launched in 2001 between the Quang Tri government and non-government organizations. With the U.S. State Department among its financial backers, Project Renew assists victims and their families, educates the public about the dangers of munitions and operates UXO removal teams. It is staffed entirely by Vietnamese.

&ldquo;Cluster munitions and 40mm grenades cause more accidents in this country than any other type of ordnance. We should really be focusing our efforts on clearing those munitions that are harmful for the local community.&rdquo;

Cluster bombs are the demon seed of modern munitions.

Each &ldquo;bomblet&rdquo; is about the size of a softball. Hundreds of them were packed into 5-foot steel cylinders that split apart after being dropped from a bomber. The bomblets had a high rate of failure &mdash; up to 20 percent in some instances &mdash; and didn&rsquo;t land hard enough to penetrate very far into the soil.

Adding to the danger, a cluster bomb coated in the sticky, red soil of Quang Tri is almost indistinguishable from a stone.

Almost one-third of the 2,640 deaths in Quang Tri province since 1975 have been children, according to Ngo Xuan Hien, who is in charge of development at Project Renew.

Cluster bombs are alluring playthings, said Guthrie, who discovered a couple of children in Laos using a cluster bomb in a game similar to bocce.

Most of the casualties come from those at poverty level, such as farmers and scrap collectors, who either don&rsquo;t understand or disregard the danger. The high-grade steel brings a high price, but the munitions must be defused before being sold.

Cluster bombs do serve one positive purpose: serving as a canary in the mine for land clearance.

&ldquo;What we&rsquo;ve found in the past 18 months since implementing this is that if you find cluster munitions, that&rsquo;s where all the other ordnance is,&rdquo; said Guthrie, who worked with munitions while in the Australian army. He acknowledges that bombs are found elsewhere, but the U.S. tended to pile on multiple types of munitions on each site rather than raining down bombs widely and randomly.

The new land release method begins with a non-technical team going into the province&rsquo;s most basic municipal configuration, called a commune. They first map every street and building and determine the boundaries. They then go to every home and begin collecting information about battles, fire bases and bombing campaigns. They identify victims of UXO, who are interviewed about where and how they were injured.

&ldquo;This takes a bit of time, but it&rsquo;s not overly expensive with just two people on the team,&rdquo; Guthrie said.

Using that information, the team generates maps and informs commune leaders that certain areas can be released without clearance &mdash; &ldquo;a whole new concept for the Vietnamese people,&rdquo; he said.

The team also looks at which areas the commune plans to develop in the next five years, whether for schools, homes, businesses, athletic fields or crop land. The teams generate maps with this development information and areas of likely munitions contamination. Socio-economic development can be planned to avoid the contamination, Guthrie said.

Seven-man technical teams survey suspect areas by dividing them into 50-by-50 meter boxes using GPS. The teams spend up to 30 minutes with specialized metal detectors. If evidence of even one cluster bomb is detected, the entire box is red-flagged, and it will, at some point, require full clearance.

&ldquo;We isolate an area on the map, go to the commune and if they have a development plan in that area that meets the requirements of the people, then NPA will go and clear that area,&rdquo; Guthrie said. &ldquo;If there&rsquo;s no development now, we&rsquo;d leave it there. We mark the area as a warning for the community and when the time comes they do want to develop the area, they have this information they can use and we then can come back and do clearance.&rdquo;

Project Renew releases land by criteria set by the national government. In some cases, Guthrie said, the NPA believes the criteria are too stringent. For example, the country&rsquo;s Ministry of Planning and Investing requires that properties it controls be cleared 5 meters below the surface.

&ldquo;There are not too many instruments in the world that can detect bombs at that depth,&rdquo; he said. &ldquo;We question the fact that you should actually have to go to that depth. Our immediate aim is to do the first 30 centimeters (about 1 foot) to release land for humanitarian purposes, so that they can plow or dig for roots. If construction is required, we&rsquo;ll return and do a deep search.&rdquo;

The new land release method challenges long-held assumptions by the Vietnamese government &mdash; and the general public &mdash; about how land should be decontaminated.

That assumption is reflected &mdash; and perpetuated &mdash; in government estimates, which Guthrie described as &ldquo;exaggerated.&rdquo; For example, Nguyen Thien Nhan, the deputy prime minister, was quoted in the Thanh Nien Daily newspaper in April saying that the country needed $10 billion and 100 years to clear UXO. Nguyen said the country was seeking international funding for clearance.

&ldquo;I don&rsquo;t think there&rsquo;s any serious resistance, no real opposition,&rdquo; Searcy said of Project Renew&rsquo;s land-release method. &ldquo;It&rsquo;s just that nobody is quite willing to be the advocate for this just yet. As there are more demonstrations of success in savings in time and money, I think they will adjust.&rdquo;

After the high-risk cluster bombs have been located and cleared, Vietnam will have to handle deeply buried bombs as does post-World War II Europe, where ordnance disposal specialists are called in to move or detonate munitions unearthed during construction.

&ldquo;Rarely do you hear of an accident or injury there,&rdquo; Searcy said. &ldquo;They have a system in place to deal with it. Vietnam needs to look at it almost in the context of having a fire department always ready to respond to an alarm.&rdquo;