‘A brother that could never be replaced’: Loved ones mourn Marine who drowned at Hawaii base 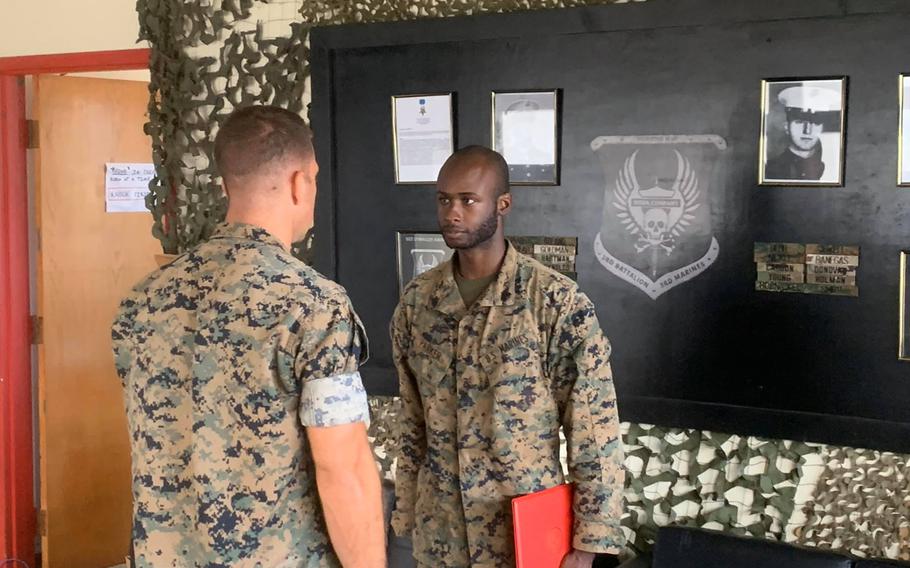 Sgt. James Jayqon Parker, right, is promoted to sergeant in this image posted May 7, 2020, in what he called a surprise ceremony on his Facebook page. Parker died after drowning off Marine Corps Base Hawaii’s Pyramid Rock Beach on June 28. Loved ones remembered Parker's sense of humor and kinship during a recent memorial service. (James Parker/Facebook)

Dozens of loved ones gathered in North Carolina late last week for a candlelight vigil in memory of a Marine who drowned in Hawaii last month.

Sgt. James Jayqon Parker, 26, of Rocky Mount, N.C., died two weeks ago, but funeral arrangements had not yet been finalized, a brief obituary on the website of the H.D. Pope Funeral Home in his hometown said.

Parker was pronounced dead after being transported to Castle Medical Center in Kailua.

His death was one of three recent Marine drownings.

On the East Coast, 20-year-old Lance Cpl. David W. Hollinger was recovered unresponsive June 24, hours after he disappeared while swimming near the French Creek boat dock on Camp Lejeune, N.C. He was later declared dead.

On July 2, Sgt. Tyler M. Rankin, 24, of Kansas City, Mo., disappeared off the coast of Japan. The Marine assigned to Marine Corps Air Station Iwakuni apparently drowned while going to the aid of two other swimmers who’d been swept offshore. His body was recovered on July 7.

“Our thoughts and prayers are with the family and friends of the Marine as we all grieve this tremendous loss,” Kennard said.

Parker joined the service in December 2015. About two months before his death, he posted photos from his promotion to sergeant.

“Walked in to my promotion and I didn’t even know,” he wrote in the May post. “But I’m thankful and glad I’m a Sgt now!”

Fellow Marines in Hawaii and North Carolina expressed their grief in online posts. Marines from Camp Hansen in Okinawa donated money via the funeral home website to have a tree planted in his memory.

Harold Hyman, a former Marine who said Parker was his cousin, posted the news to a Facebook group for Marine veterans shortly after the family was notified.

“Brothers and Sisters please say a prayer for James Parker and his family today,” Hyman wrote. “I love you Cuz! Semper Fi.”

Parker was the father of a young son who attended the memorial Friday with Parker’s mother. His friends presented them with face masks printed with Parker’s name and rank, which some friends also wore.

After remembering Parker’s sense of humor and sharing memories, the friends and family released blue and black balloons into the sky, a video streamed live on Facebook by user Cynthia A. Brewer showed.

“This is going to be something that’s going to take a long time to get used to,” said Epps, his close friend, who talked about their days together on the high school marching band. “I stay strong as I can because of the simple fact that I know that if James was beside me, James would be telling me, ‘We’re in this together.’”