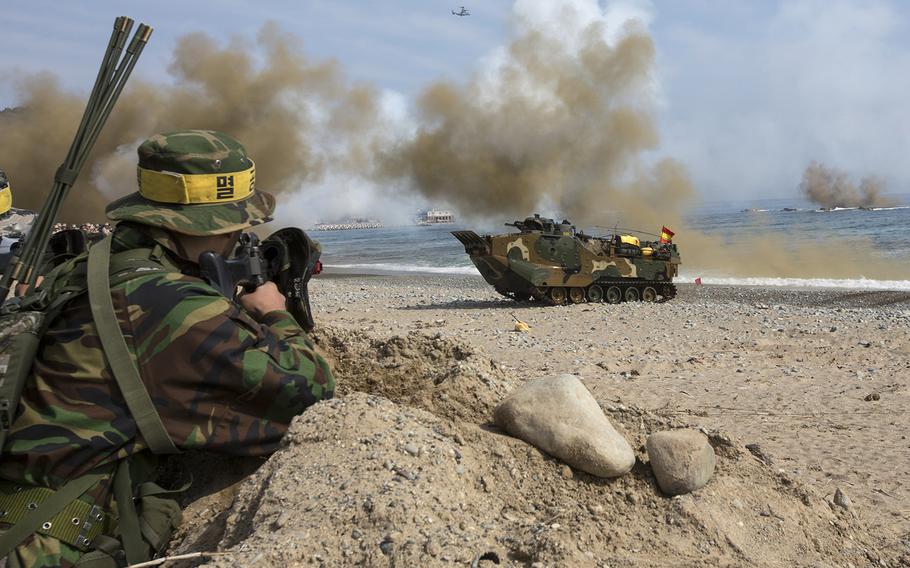 The roughly $8.5 billion spent each year by the Pentagon to house tens of thousands of American troops in Japan and South Korea benefits the Asia-Pacific region and the U.S. homeland, according to congressional watchdog group.

The U.S. military spent approximately $34.3 billion between 2016 and 2019 to station more than 83,000 troops permanently in Japan and South Korea, which paid dividends by maintaining strong alliances with those nations, deterring aggression of potential enemies, and ensuring stability in the broader region, according to a Government Accountability Office report published Wednesday. The report was mandated by Congress in the 2020 National Defense Authorization Act as then-President Donald Trump’s administration considered removing some U.S. troops from countries around the world, including South Korea.

The GAO said its new report leaned largely on nongovernment experts and reviewed Defense and State Department policies. It was released as Defense Secretary Lloyd Austin on Wednesday visited Seoul, the South Korean capital, as part of his first international trip as the Pentagon’s leader. Austin visited Japan earlier this week.

Austin, in public remarks in Seoul on Wednesday and Tokyo on Tuesday, said he visited those two nations first to reaffirm the U.S. commitment to the long-standing partnerships, which are seen as critical in efforts to dissuade Chinese and North Korean aggression in the region. Austin has said he considers China’s growing military ambitions his primary international threat.

The long-standing alliances with Japan and South Korea, Austin said this week, contribute to “a free and open Indo-Pacific” region. The GAO report reached the same conclusion, including analysis that American troops in Japan and South Korea were important to maintain supply lines and trade routes through the region.

GAO found permanent U.S. military presences in Japan and South Korea had other benefits, including regular assurances those country’s military forces could fight alongside U.S. troops, close proximity to respond to natural disasters or security events in the region, and support for nuclear nonproliferation among its allies in the region.

The experts polled by GAO also agreed the U.S. military presence in Japan and South Korea strengthened the overall relationships the United States maintains with those host nations.

The size of U.S. forces in South Korea and Japan has changed minimally during the period that the GAO studied, and the organization said experts concluded locals were largely supportive of the U.S. military presences in their countries.

However, the GAO also said locals in some locations near U.S. bases object to U.S. troops presence, especially on Okinawa, Japan, and can strain bilateral relationships.

A long-held and often-delayed U.S. plan to remove some 9,000 Okinawa-based Marines to other locations including Guam, Hawaii and the U.S. mainland could help quell those issues, experts said.

In all, the United States spent some $20.9 billion in Japan between 2016 and 2019 to maintain the roughly 55,000 troops there, the GAO reported. It spent another $13.4 billion in South Korea for the approximately 28,500 troops stationed in there. Those totals largely include money spent on troops’ salaries, military operations, and construction and maintenance of military and family housing facilities, according to the GAO.

South Korea and the United States announced this month a deal to increase South Korean payments for housing American troops there by 13.9% for 2021.