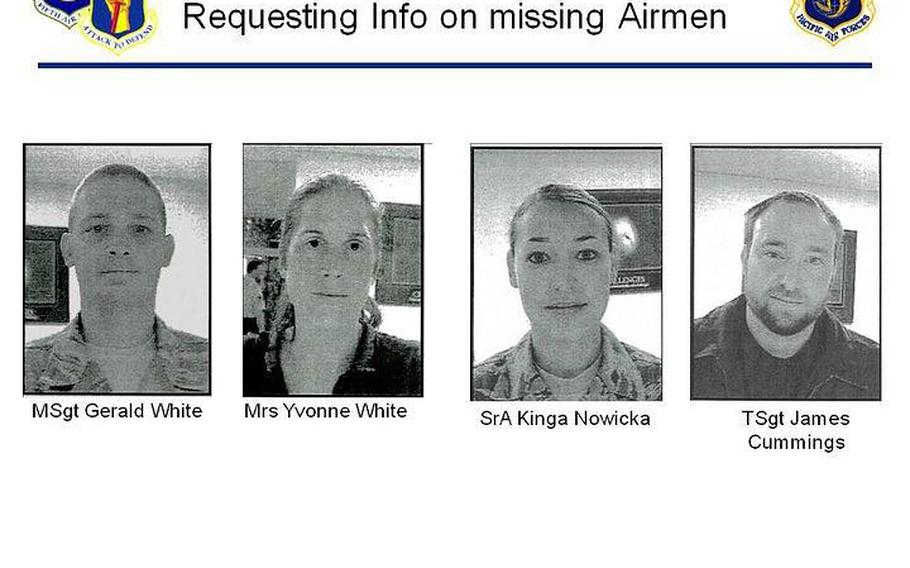 The Japanese coast guard said it rescued four Americans on Monday who were apparently swept out into the Pacific Ocean during a kayaking trip Sunday afternoon. Misawa Air Base officials searched for the four base residents, picture from left to right, are: Master Sgt. Gerald White, his wife, Yvonne White, Senior Airman Kinga Nowicka and Tech. Sgt. James Cummings. (Courtesy of the U.S. Air Force)

MISAWA AIR BASE, Japan &ndash; The Japanese coast guard rescued four Americans who were clinging to their bright yellow kayaks in the Pacific Ocean on Monday afternoon, after the group spent nearly 24 hours at sea.

U.S. personnel from Naval Air Facility Misawa were first to spot the group about 13 miles off the coast. The kayakers -- Master Sgt. Gerald White, his wife, Yvonne White, Senior Airman Kinga Nowicka, and Tech. Sgt. James Cummings -- were reported missing earlier in the day after they failed to return to the base on Sunday afternoon.

A Navy crew flying a C-12 Huron spotted them in the water at about 2:35 p.m. and radioed their position to a nearby Japanese coast guard helicopter and ship.

&ldquo;It&rsquo;s great to know that we were able to spot them and see that they were brought to safety,&rdquo; said Lt. Cmdr. Frank Lee in a Navy news release. &ldquo;We were flying lower than we typically fly in the C-12 to give ourselves a better chance of spotting them.&rdquo;

The kayakers had left home Sunday afternoon, with a promise to a babysitter to return by 5:30 p.m. They never came home and were reported missing. One factor that complicated early search efforts was that they hadn&rsquo;t specified where they were headed to go kayaking.

Shortly after noon, the two vehicles the group used to haul the kayaks, wetsuits and life preservers on the trip were discovered on a remote beach along the Pacific coastline near Rokkasho Village.

Twenty minutes after receiving their location from the U.S. Navy, the Japanese coast guard plucked the exhausted Americans into the patrol boats. Images released by the coast guard show the U.S. personnel on two, not three, kayaks. As of Monday night, officials had not said how the group ended up so far from shore or what happened to the third kayak.

Coast guard officials said the four were weak, but had suffered no serious injuries. They were transported to Mutsu Ogawara Port and taken by ambulances at 3:40 p.m. to a local medical facility for evaluations and treatment.

&ldquo;We are overjoyed that our family members have been found&rdquo; Col. Michael D. Rothstein, 35th Fighter Wing commander, said in the release. &ldquo;We coordinated closely with the Japanese government and used all available resources to find them.&rdquo;

The Pacific Ocean is notoriously dangerous on the coast near the base, and the Air Force bans many water activities along a roughly 70-mile stretch of coast between Hachinohe &ndash; just south of the Misawa &ndash; and the northeastern tip of the Shimokita peninsula.

&ldquo;Due to the powerful ocean rip current in the Pacific Ocean near Misawa, aquatic activities can be very dangerous,&rdquo; according to the wing&rsquo;s instruction on community standards.

While kayaking is an authorized activity, the base has banned swimming, scuba diving, snorkeling and water skiing in the area. The only exception is at Misawa Beach, if there is a lifeguard on duty.

Surfing, windsurfing and jet skiing are allowed in the Pacific, unless the Japanese have banned it in specific areas. All but surfers are required to wear personal flotation jackets, according to the standard.