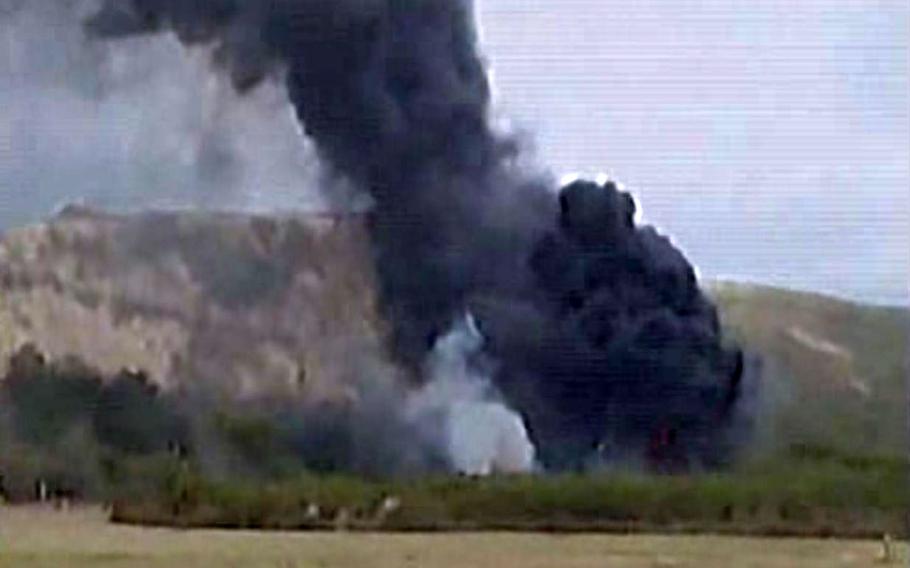 FORT SHAFTER, Hawaii — Four Marines remained hospitalized Monday — one in critical condition — a day after the crash of an MV-22 Osprey on Oahu with 22 people on board, the Marine Corps said in a statement.

A fifth Marine who died in Sunday’s crash was identified as Lance Cpl. Joshua E. Barron, of Spokane, Wash., according to local news reports. The tiltrotor crew chief was 24 years old. He was assigned to marine Medium Tiltrotor Squadron 161.

Three of those who are still being treated were listed in stable condition. The 17 other Marines aboard were treated and released.

Barron’s mother, Michele Barron, told The Associated Press that her son loved his job and was proud of what he did. Describing him as her “superhero,” she said he joined the Marines because “he just wanted to do something more with his life.”

The Osprey was from the 15th Marine Expeditionary Unit and was operating at Marine Corps Training Area-Bellows, flying from the USS Essex to deliver a group of Marines for training on land.

The 15th MEU, based at Camp Pendleton, Calif., will continue its sustainment training exercises, which are expected to conclude Thursday, before continuing its deployment to the Pacific Command and Central Command areas of responsibility, the Marine Corps said.

The 15th MEU departed San Diego on May 10 for the seven-month deployment.

Kimberly Hynd told The Associated Press that she was hiking the Lanikai Pillbox Trail on Sunday morning and had seen three Ospreys maneuvering in the hills around Bellows.

She then saw smoke and fire rising from the distance but did not hear a crash.

“It looked like they were doing some sort of maneuver or formation — and so I was taking pictures of it because usually you can’t see them that close up,” Hynd told AP.

Ospreys are equipped with tiltrotors, allowing them to land and take off vertically as helicopters do, but then fly like a fixed-wing aircraft.

The Osprey has been used in Afghanistan and Iraq. The U.S. has a fleet of them on Okinawa and recently announced that 10 more would be stationed at Yokota Air Base in Tokyo, with the first to arrive in 2017.

Some Okinawans have protested the arrival of Ospreys, claiming they aren’t safe because of fatal accidents during its early years.

Okinawa Gov. Takeshi Onaga on Monday demanded that all Osprey flights be suspended on the island until the cause of the crash was determined, according to Japan’s Kyodo news service.

Onaga plans to visit Hawaii at the end of this month to meet with Hawaii Gov. David Ige in hopes of enlisting him in his quest to prevent construction of a new U.S. base on Okinawa.