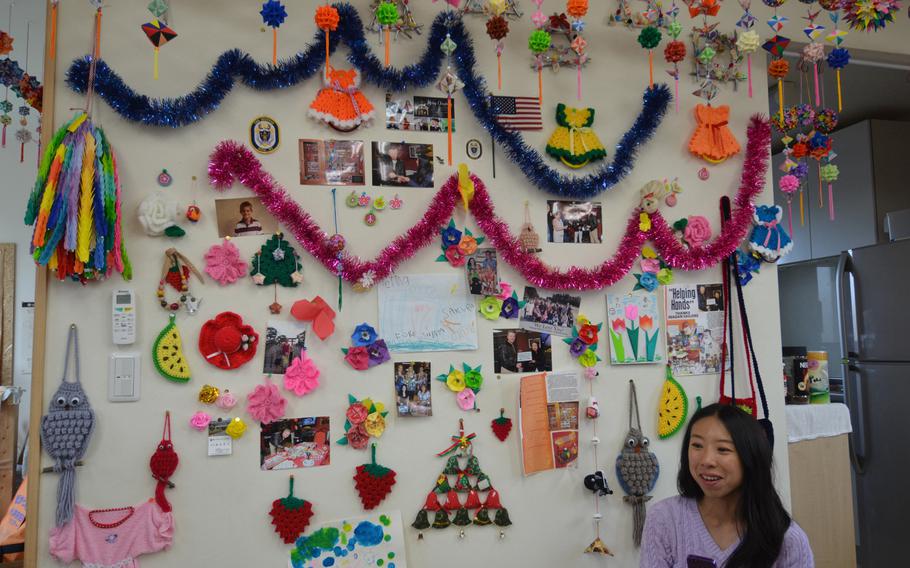 A wall adorned with pictures and gifts from U.S. military families is a prominent part of the community room at the Terauchi No. 2 temporary housing development in Minamisoma, Japan. Seated is Masako Sullivan, a Navy spouse who has been instrumental in helping military families provide supplies and emotional support to the 40 households living there. ()

A wall adorned with pictures and gifts from U.S. military families is a prominent part of the community room at the Terauchi No. 2 temporary housing development in Minamisoma, Japan. Seated is Masako Sullivan, a Navy spouse who has been instrumental in helping military families provide supplies and emotional support to the 40 households living there. () 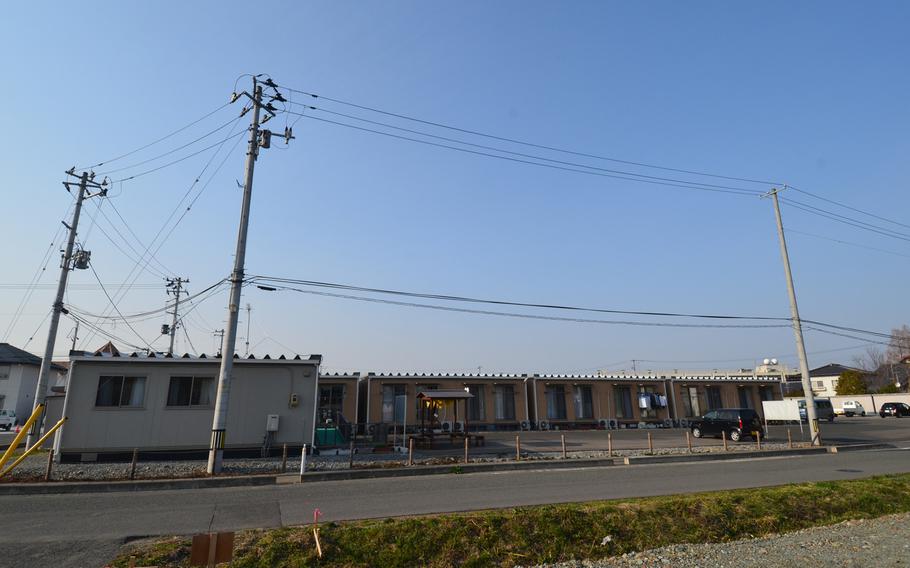 The Terauchi No. 2 temporary housing community in Minamisoma, where 40 households still live, more than three years after the disasters of March 11, 2011 left them homeless. (Erik Slavin/Stars and Stripes) 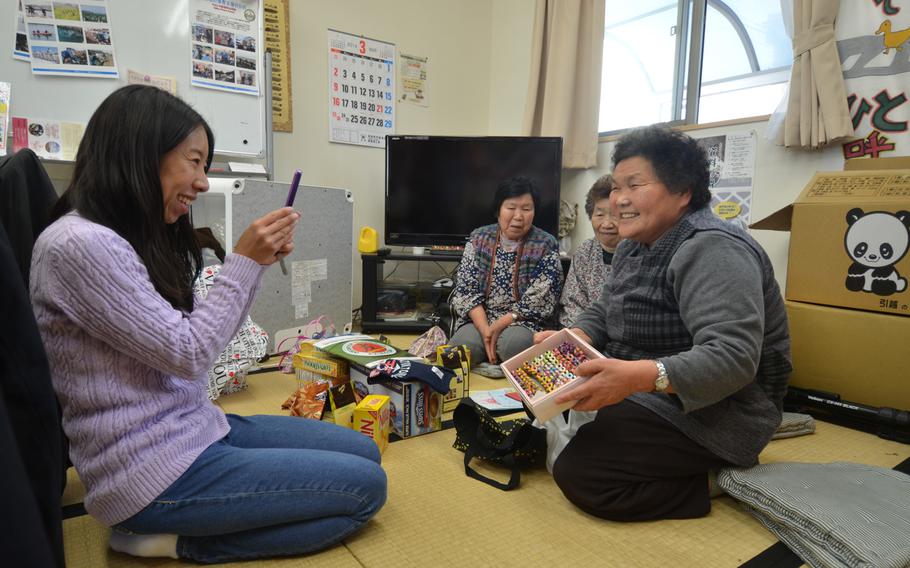 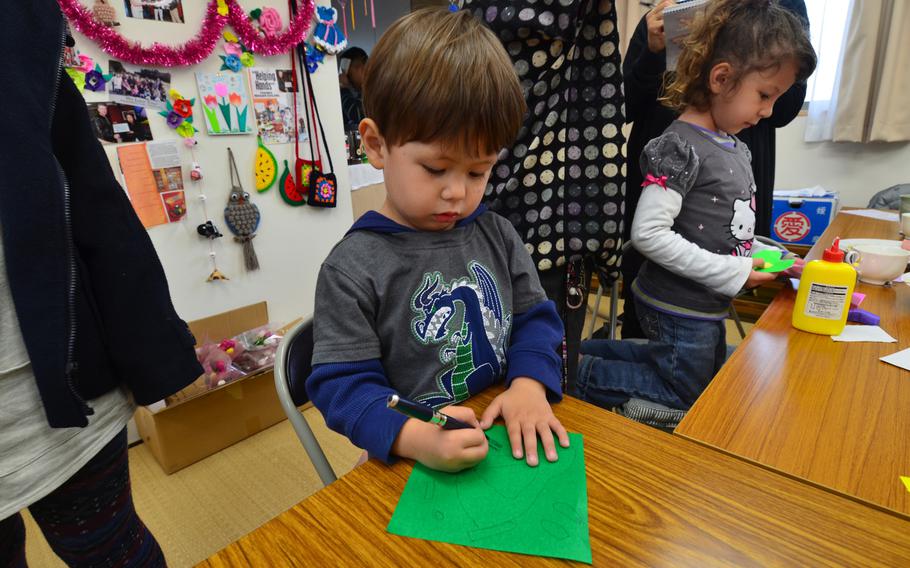 Kaito Sullivan, 3, and his sister Serina, 5, create art projects while visiting residents of a temporary housing complex in Minamisoma, Japan. Military families have been supporting the residents, who were displaced by the March 2011 disasters, through the group Helping Hands For Tohoku. (Erik Slavin/Stars and Stripes) 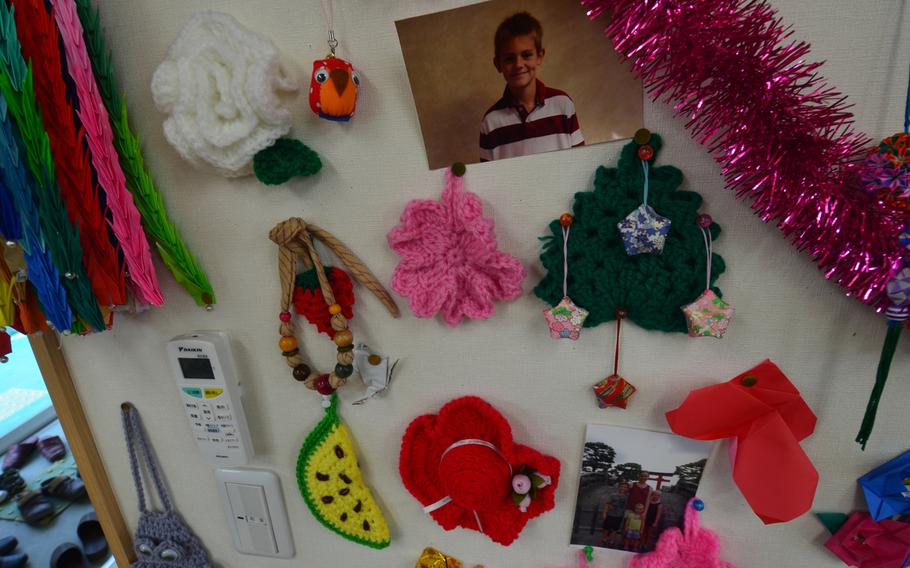 A wall adorned with pictures and gifts from U.S. military families is a prominent part of the community room at the Terauchi No. 2 temporary housing development in Minamisoma, Japan. (Erik Slavin/Stars and Stripes) 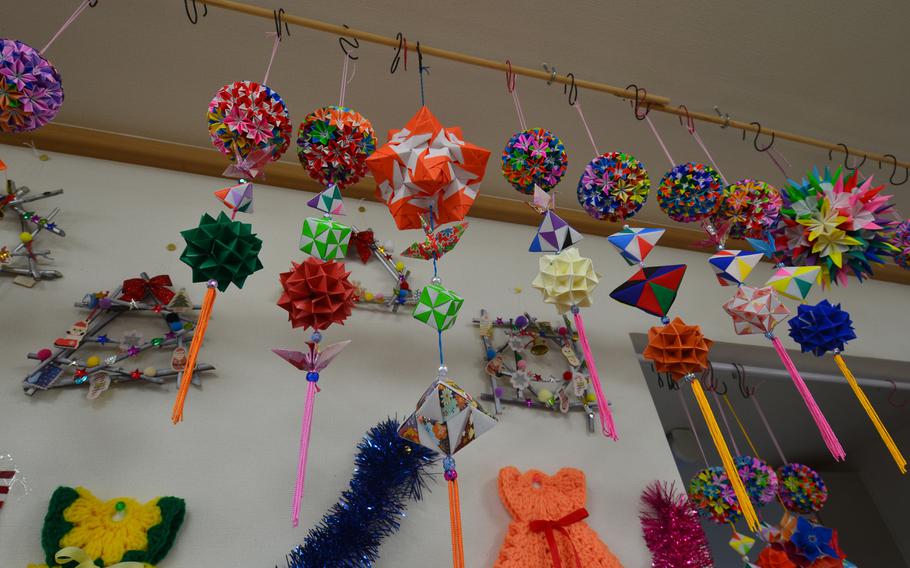 Origami that the residents of the temporary housing complex at Minamisoma shared with military families two years ago still hangs in the community room. (Erik Slavin/Stars and Stripes)

MINAMISOMA, Japan — The residents of the Terauchi No. 2 housing project served up heaping portions of thick, tangy Japanese curry, with a side of steamed rice and grilled ham.

Older women, along with a couple of teen girls, played games with Kaito Sullivan, 3, and his big sister, Serina, 5, in the housing project’s community room.

They showed the children pictures on the wall of their mother, Masako Sullivan, whose organizing efforts have allowed hundreds of military families to help survivors of the 9.0-magnitude earthquake, the tsunami that killed more than 19,000 people and the nuclear accident that irradiated the Fukushima coast.

RELATED: Stars and Stripes coverage of the 2011 Japan earthquake and tsunami disaster

Near pictures of Masako, whose husband is a U.S. Naval officer, were pictures of USS Ronald Reagan sailors, a USS Mustin patch, and holiday cards from Yokosuka families.

For a few hours, the Sullivans and Terauchi No. 2’s residents shared the mirth of reunited friends.

But their happiness was tempered by an unpleasant reality: After all this time, they were still meeting at a temporary housing project.

More than three years after the disaster, the occupancy rate of the 40 homes at Terauchi No. 2 remains at 100 percent. The Terauchi residents are among 44,589 households still living in prefabricated housing, according to the Japanese government’s February statistics.

When Stars and Stripes and a group of military spouses first visited the Terauchi complex two years ago, the needs were mostly material: uncontaminated water, rice and personal items were in short supply. Now, the biggest needs are perhaps more difficult to meet.

Many fight a health battle with the stress that has grown out of continuing uncertainty, while they live in homes that offer little privacy and are, on average, 320 square feet.

“People are suffering from unseen problems,” said resident Reiko Suzuki, 59. “There are many that have developed stomach illnesses, or depression.”

Suzuki hopes to someday buy a small home, somewhere far from the nuclear plant that rendered her former home uninhabitable.

For now, she remains at Terauchi No. 2 to take care of her mother-in-law, 90, who has dementia. Suzuki said she drinks more than she used to relieve the stress she feels, though it makes it harder for her to sleep.

The health struggles experienced by Suzuki and others at Terauchi appear to be common among Japan’s disaster survivors, according to ongoing research.

In March, Brigham Young University professor Niwako Yamawaki and scholars from Saga University published a mental health study on 241 citizens of the evacuated town of Hirono. More than half experienced “clinically concerning” symptoms of post-traumatic stress disorder, while two-thirds reported depression symptoms, according to the study.

The disaster survivors in temporary housing, many of them elderly, have the additional burdens of leaving behind the neighborhoods and people they have known for decades.

“Japanese are very collectivistic people and their identity is so intertwined with neighbors,” Yamawaki said in a statement. “Breaking up the community has so much impact on them.”

Moving in, moving out

Hundreds of thousands of disaster survivors have moved out of temporary housing, either through their own means or government assistance. Japan has also built some new apartments and homes, which former temporary housing residents now rent.

After land near the Fukushima Dai-ichi nuclear plant and along the tsunami-battered Tohoku coast was declared off-limits, prices for the remaining nearby real estate increased exponentially.

“Nearly half of landowners say ‘I don’t want to sell,’ ” Kosuke Motani, chief senior economist for the Japan Research Institute, told reporters in March. “Why? ‘I want to continue to be a landowner. Having land is my identity.’ That thought has been strong in mind of Japanese … for the last 1,300 years.”

For some families, the only option is moving from one temporary housing project to a more desirable one.

Yoshiyuki Sato, 61, the neighborhood community association leader, said that a few residents have left Terauchi No. 2 in the last few years, but their homes are then taken by families seeking to move closer to their pre-disaster houses.

Toshi Kori, 67, moved out of Terauchi No. 2 in May, settling into a new house about five minutes away with her husband, daughter and granddaughter.

It is a better situation but hardly stress-free.

Kori said she wouldn’t let her granddaughter eat anything grown locally, despite rigorous government safety checks for radioactive isotopes. Most former and current residents said they haven’t had any faith in government guarantees since the disaster.

Kori and her husband fished for a living before the nuclear accident. Now they live off their pensions.