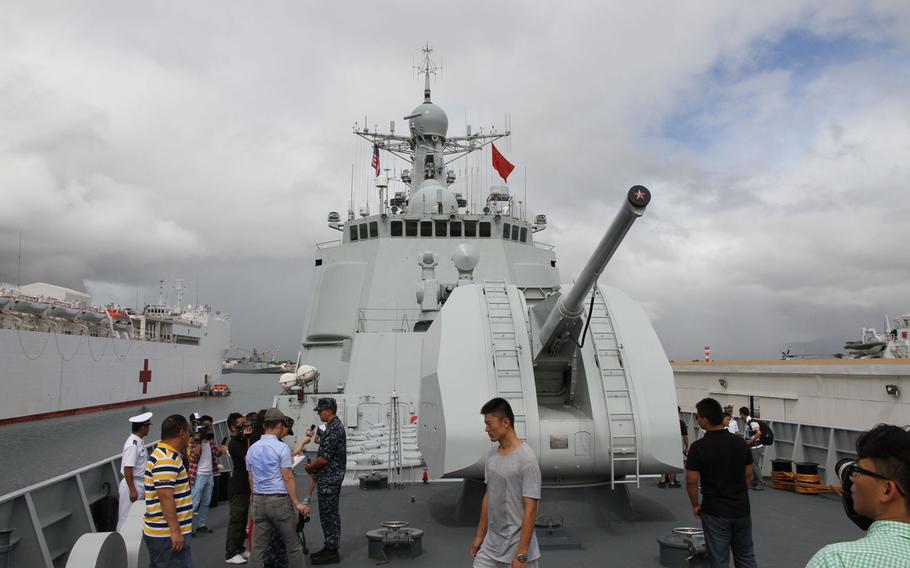 Reporters and other visitors gather to inspect the bow of the Haikou, China's flagship destroyer, during the 2014 Rim of the Pacific exercise in Hawaii. (Wyatt Olson/Stars and Stripes)

Four nations will join this summer’s Rim of the Pacific drills in Hawaii, increasing the number of countries participating in the world’s largest international maritime exercise to 27.

Brazil, Denmark, Germany and Italy will take part for the first time in the biennial RIMPAC, which is slated to begin June 30 and end Aug. 4, the Navy said Tuesday. China, which joined the exercise in 2014, will also participate.

While most of the exercise is held in Hawaii, amphibious operations will take place in Southern California, featuring a harpoon missile shoot from a Navy littoral combat ship. A submarine rescue is new for this year, the Navy said.

Playing a major role in this year’s RIMPAC is the Navy’s “Great Green Fleet,” a yearlong initiative that uses energy conservation measures and alternative fuels to demonstrate how cutting energy costs can contribute to overall military readiness.

Almost all the vessels participating will use an approved alternate-fuel blend, the Navy said.

Some in Congress have called for China to be disinvited to RIMPAC, citing the country’s expansionist actions in the South China Sea, where it has enlarged small atolls through sand dredging. The country has built facilities and runways on some, construction the U.S. characterizes as militarization.

Last month, U.S. Rep. Mark Takai, of Hawaii, a member of the House Armed Services Committee, asked Secretary of Defense Ash Carter to reconsider China’s invitation in light of its naval actions over the past two years.

“I guess my question is why then should we reward China for this aggressive behavior by including them in an event meant for allies and partners?” Takai said to Carter during a March hearing. He described China’s behavior as “the polar opposite of U.S. objectives in the region.”

In late April, China told the U.S. it would deny a Hong Kong port visit by the USS John C. Stennis aircraft carrier strike group planned for May 3-8. The denial likely came in response to the strike group’s recent presence near the disputed Spratly Islands close to the Philippines.

U.S. Pacific Fleet commander Adm. Scott Swift has said on numerous occasions he believes the path forward with China is to deepen relationships with military-to-military contact.

In 2014, China sent four ships to RIMPAC, including the destroyer Haikou and hospital ship Peace Ark. It also sent a spy ship, which remained in international waters off Hawaii.