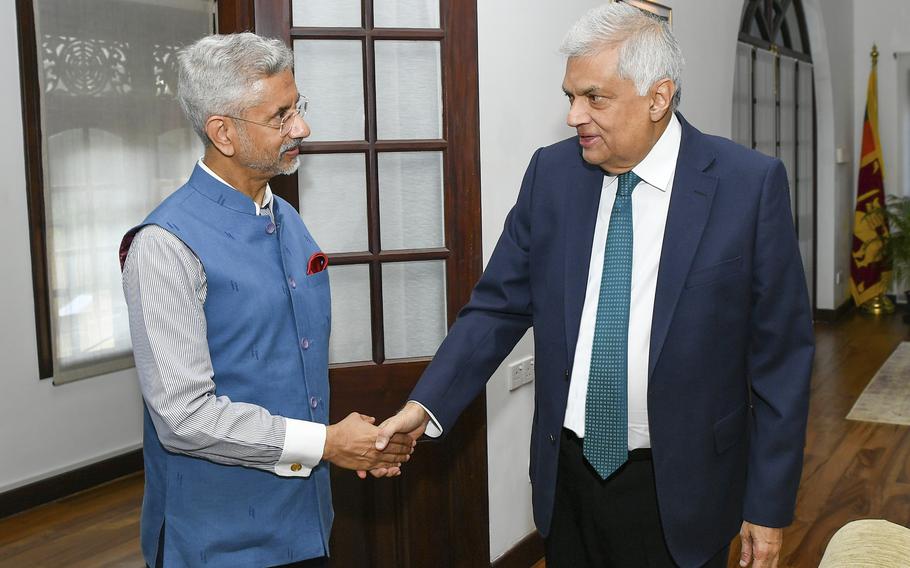 COLOMBO, Sri Lanka — India's foreign minister said Friday his country has given financial assurances to the International Monetary Fund to facilitate a bailout plan to help neighboring Sri Lanka emerge from its worst economic crisis, in a first formal announcement from one of the island nation's creditors.

India's Foreign Minister S. Jaishankar announced the support while on a two-day visit to Sri Lanka, where he met with President Ranil Wickremesinghe and other Cabinet ministers.

"We felt strongly that Sri Lanka's creditors must take proactive steps to facilitate its recovery. India decided not to wait on others but to do what we believe is right. We extended financing assurances to the IMF to clear the way for Sri Lanka to move forward," he said.

"Our expectation is that this will not only strengthen Sri Lanka's position but ensure that all bilateral creditors are dealt with equally," Jaishankar added.

He did not elaborate on the kind of assurances given.

Sri Lanka has a total foreign debt of $51 billion and it must pay back $28 billion by 2027. However, the island nation announced it was suspending repayment of $7 billion that was due last year amid a serious foreign currency shortage.

India's official credit to Sri Lanka is $4.4 billion excluding other forms of lending. Among Sri Lanka's leading creditors are Japan and China.

Sri Lanka and the IMF have reached a preliminary agreement on a $2.9 billion bailout plan over four years, but final approval depends on assurances given by creditors on the debt restructuring.

Sri Lanka has since has shown some signs of progress with shortages reduced and day-to-day functions restored. However, daily power cuts continue due to the fuel shortage and the government is struggling to find money to pay government employees' salaries and conduct other administrative functions.

It announced this month it is cutting 6% from budgets for each ministry this year and plans to downsize its military, which had swelled to more than 200,000 personnel due to a long civil war. The government plans to cut the military's size by nearly half by 2030.

Jaishankar said India encourages its businesses to invest in energy, tourism and infrastructure and expressed hope that Sri Lanka's government would create a business friendly environment.

Jaishankar also reiterated to Sri Lanka demands for a full implementation of an India-backed scheme to share power with minority Tamils. A civil war between the majority Sinhala-controlled Sri Lankan government and ethnic Tamil rebels killed at least 100,000 people, according to U.N. conservative calculations, before it ended with the rebels' defeat in 2009.