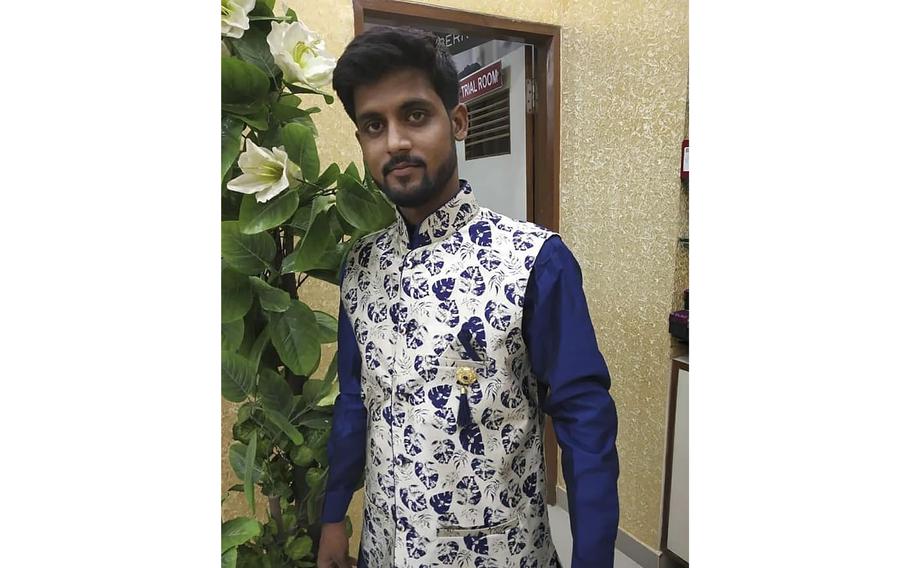 This undated photo made available by Deepak Jaiswal shows Deepak’s younger brother Sonu Jaiswal, 25, who died in a plane crash in Nepal on Sunday, Jan. 15, 2023. Sonu shot and livestreamed a 90-second smartphone video of the plane’s descent before it veered to the left and crashed into a gorge, as the camera went on to record the screeching sound of an engine and fire and smoke. (Deepak Jaiswal via AP)

NEW DELHI — Airplane passenger Sonu Jaiswal's 90-second smartphone video began with the aircraft approaching the runway by flying over buildings and green fields over Pokhara, a Nepalese city in the foothills of the Himalayas.

Everything looked normal as Jaiswal's livestream on Facebook shifted from the picturesque views seen from the plane's window to fellow passengers who were laughing. Finally, Jaiswal, wearing a yellow sweater, turned the camera to himself and smiled.

The plane suddenly appeared to veer toward its left as Jaiswal's smartphone briefly captured the cries of passengers. Within seconds the footage turned shaky and recorded the screeching sound of an engine. Toward the end of the video, huge flames and smoke took over the frame.

The Yeti Airlines flight from Kathmandu that plummeted into a gorge Sunday, killing all 72 on board, was co-piloted by Anju Khatiwada, who had pursued years of pilot training in the United States after her husband died in a 2006 plane crash while flying for the same airline. Her colleagues described her as a skilled pilot who was very motivated.

The deaths of Khatiwada, 44, and Jaiswal, 25, are part of a deadly pattern in Nepal, a country that has seen a series of air crashes over the years, in part due to difficult terrain, bad weather and aging fleets.

On Tuesday, authorities began returning some identified bodies to family members and said they were sending the ATR 72-500 aircraft's data recorder to France for analysis to determine what caused the crash. 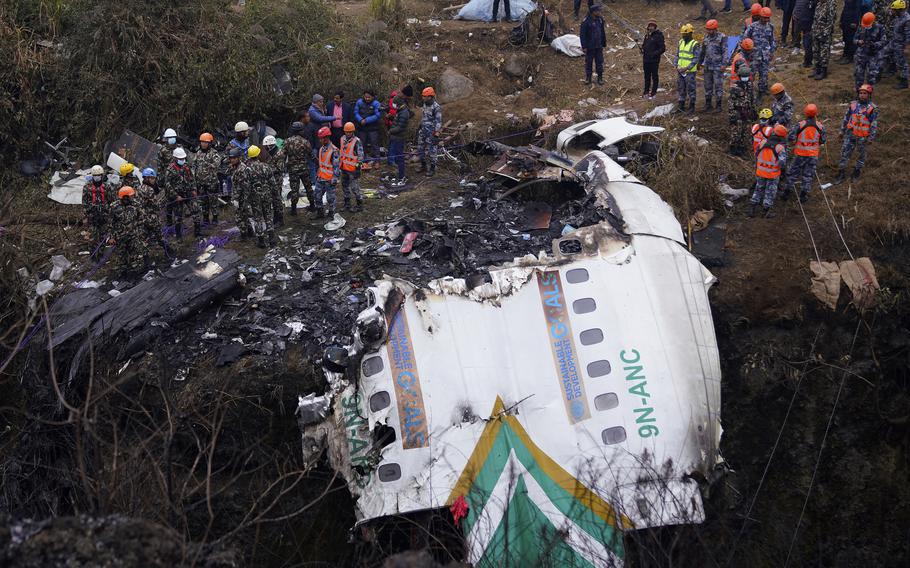 Rescuers scour the crash site in the wreckage of a passenger plane in Pokhara, Nepal, Monday, Jan.16, 2023. The Yeti Airlines flight from Kathmandu that plummeted into a gorge Sunday killed at least 70 passengers out of the 72 on board. (Yunish Gurung/AP)

In India's Ghazipur city, nearly 270 miles south of the crash site in Nepal, Jaiswal's family was distraught and still waiting to identify his body. His father, Rajendra Prasad Jaiswal, had boarded a car to Kathmandu on Monday evening and was expected to reach Nepal's capital late Tuesday.

Still, the family was not willing to trust the news, holding out hope for his survival.

By Sunday evening, however, it had become clear. Deepak, who confirmed the authenticity of Jaiswal's livestream to The Associated Press, was among the first in his family to watch the video that had since gone viral on the internet.

"We couldn't believe the news until we saw the video," he said. "It was painful."

Jaiswal, a father of three children, worked at a local liquor store in Alawalpur Afga village in Uttar Pradesh state's Ghazipur district. Deepak said his brother had gone to Kathmandu to visit Pashupatinath temple — a Hindu shrine dedicated to the god Shiva — and pray for a son, before setting off to Pokhara for sightseeing along with three other friends.

"He was not just my brother," Deepak said. "I have lost a friend in him."

The tragedy was felt deeply in Nepal, where 53 passengers were locals.

Hundreds of relatives and friends of the victims consoled each other Tuesday at a hospital. Families of some victims whose bodies have been identified prepared funerals for their loved ones.

Co-pilot Khatiwada's colleagues, however, were still in disbelief.

Khatiwada began flying for Yeti Airlines in 2010 — four years after her husband, Dipak Pokhrel, died in a crash. He was flying a DHC-6 Twin Otter 300 plane for the same airline when it crashed in Nepal's Jumla district and burst into flames, killing all nine people on board. Khatiwada later remarried.

Sherpa said Khatiwada was a "skilled pilot" with a "friendly nature" and had risen to the rank of captain after flying thousands of hours since joining the airline.

"We have lost our best," Sherpa said.