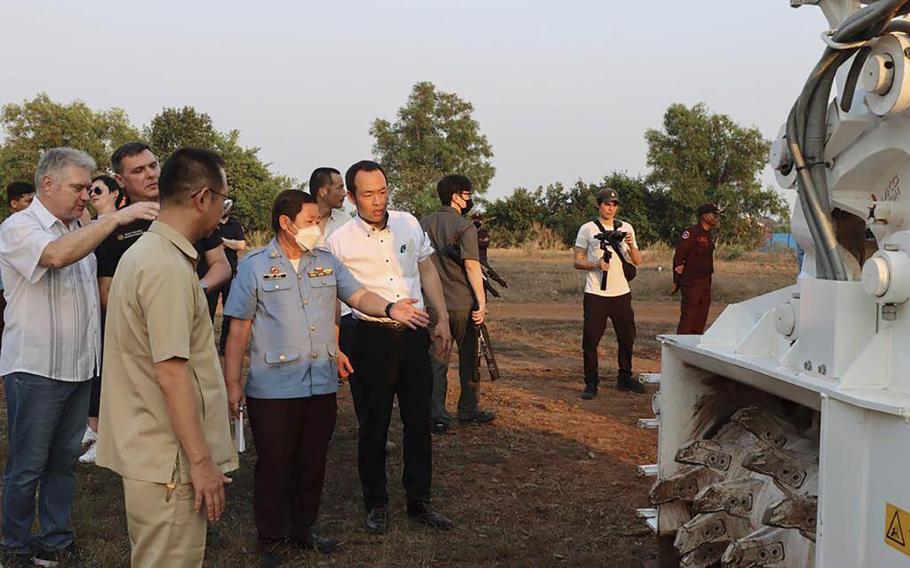 PHNOM PENH, Cambodia — Fifteen Ukrainian deminers are being trained by experts in Cambodia who are among the world's best because of experience from clearing the leftovers of nearly three decades of war.

The Ukrainian deminers are being hosted by the Cambodian Mine Action Center, a government agency that oversees the clearing of land mines and unexploded ordnance in Cambodia. The weeklong program began Monday and is supported by the Japan International Cooperation Agency.

Heng Ratana, the demining center's director general, said the Ukrainians will be trained by Cambodian experts at the Mine Action Technical Institute in the central province of Kampong Chhnang, visit demining sites in northwestern Battambang province and tour a museum dedicated to land mines and unexploded ordnance in Siem Reap province, home to the famous Angkor temples.

He said the training will focus on mine clearing using technology including a Japanese detection device called the Advanced Landmine Imaging System.

"Russia is the only party to the conflict known to have used banned antipersonnel mines, while both Russia and Ukraine have used anti-vehicle mines," it said.

Cambodia was littered with land mines and other unexploded ordnance after almost three decades of war ending in the late 1990s. An estimated 4 million to 6 million unexploded devices remain uncleared and continue to kill people.

Since the end of the fighting, nearly 20,000 people have been killed and about 45,000 have been injured by leftover war explosives, although the average annual death toll has dropped from several thousand to less than 100.

Cambodian deminers have become among the world's most experienced, and several thousand have been sent in the past decade under U.N. auspices to work in Africa and the Middle East.

Hun Sen has said the Cambodian deminers will be sent to Poland, a staging ground for much assistance to Ukraine, but Heng Ratana said Monday the number of deminers to be sent and their destination have not been finalized.

The offer came after Hun Sen. in an unusual move for a nation that usually aligns itself with Russia and China, condemned Moscow's invasion of Ukraine, saying "Cambodia is always against any country that invades another country."

Cambodia was one of nearly 100 U.N. member countries that co-sponsored a resolution condemning Russia's invasion.

Several other countries, including the United States and Germany, have already provided Ukraine with demining assistance.