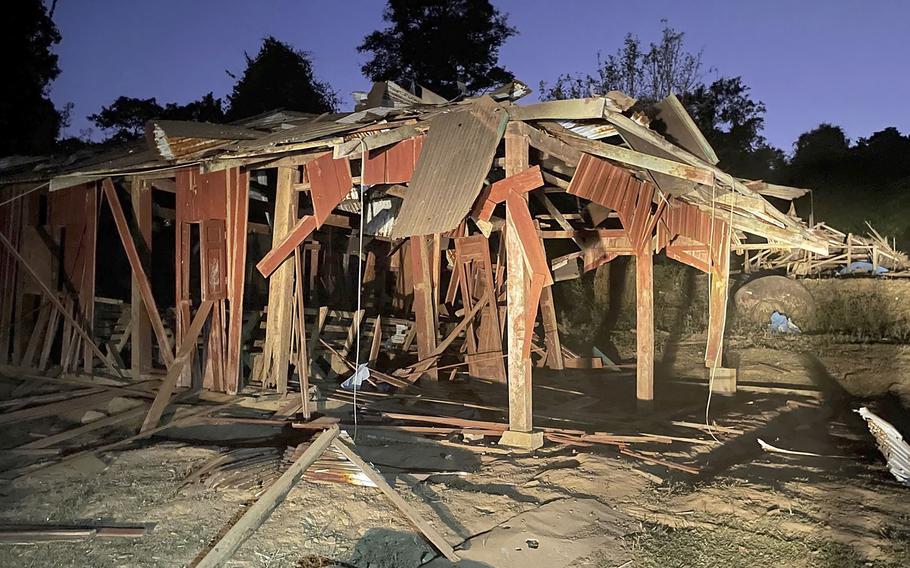 This photo provided by the Free Burma Rangers shows remains of a destroyed village school in Lay Wah, one of the villages in Karen state’s Mutraw district, Myanmar, Thursday, Jan. 12, 2023. (Free Burma Rangers/AP)

BANGKOK — Companies from at least 13 countries have helped Myanmar build up its capacity to produce weapons that are being used to commit atrocities following a 2021 military takeover, independent international experts have found.

The report released Monday by the Special Advisory Council for Myanmar details how the country has stepped up arms production since the army seized power on Feb. 1, 2021, igniting a mass public opposition movement.

The army's takeover from elected civilian leaders reversed nearly a decade of progress toward democracy after 50 years of military rule. After security forces used lethal force against peaceful demonstrators, opponents of military rule took up arms. Some U.N. experts have characterized the situation as a civil war.

The Assistance Association for Political Prisoners has documented more than 2,700 civilian deaths in the violence, including 277 children, while more than 13,000 people have been detained. The true number is believed to be much higher.

Companies in the U.S., Europe, Asia and the Middle East are supporting the military supply chain, the report says, urging those businesses to ensure they are not facilitating human rights abuses.

The growth of the homegrown arms industry comes as some countries have enforced arms embargoes or sanctions against individuals and companies involved in trading or manufacturing arms.

In October, the U.S. Treasury imposed sanctions against Aung Moe Myint, a businessman close to the army who it said facilitates arms deals on its behalf. His brother, Hlaing Moe Myint, and the trading company they founded, Dynasty International Company Ltd., were also targeted. One of its directors, Myo Thitsar, also was designated for sanctions.

In November, the U.S. imposed sanctions on aircraft suppliers to the military, citing deadly air strikes on civilians.

Myanmar has no private arms makers, so any such companies are run by the Ministry of Defense and Directorate of Defense Industries, the report said.

Local factories still can draw upon licensed technology and overseas supply chains, technical support and other backing, sometimes by sending equipment to Singapore and Taiwan for upgrading and maintenance, it said.

In a statement, council expert Chris Sidoti urged that governments investigate and when justified initiate action against companies that enable Myanmar's military to make weapons used in "indiscriminate attacks on civilians."

"Foreign companies that profit from the suffering of the Myanmar people must be held accountable," said Sidoti, a human rights lawyer and a member of the U.N. Fact Finding Mission on Myanmar from 2017 to 2019.

A report last year by the United Nations' Office of the High Commissioner for Human Rights outlined some of those links, naming companies in Russia, China, Ukraine, Israel, Singapore and the Philippines.

A major factor driving the buildup in the domestic arms making industry is the risk that imports of arms, military aircraft and other weaponry will be cut off by embargoes or sanctions. The army is now self-reliant in making small arms and light weapons, the report says.

Myanmar's arms-making capacity includes a wide variety of items from assault rifles and machine guns to mortars, anti-tank and anti-aircraft weapons, missiles and missile launchers and artillery and air defense systems, it said.

Land mines and naval mines are among other products being made in Myanmar, said the report, citing people who have worked in the industry and also photos of weapons displayed at a defense and security exhibition in Bangkok that showcased such products.

Weapons factories, known as "KaPaSa," an abbreviation of the local name for the Directorate of Defense Industries, draw on components such as fuses, optical sights and detonating caps imported from India and China. They also have computer numerical control, or CNC, machines for milling, grinding and other functions made in Austria, Germany, Japan, Taiwan and the United States, the report said.

The exact number of such factories is unclear but analysis of satellite images and other information has identified dozens of such facilities.

Much of the technology used in the arms-making industry was transferred for civilian use before the military took control, ousting the democratically elected government of Aung San Suu Kyi.

But more research is needed on the complex network of suppliers, licensors of technology and other details of weapons manufacturing, the report said.