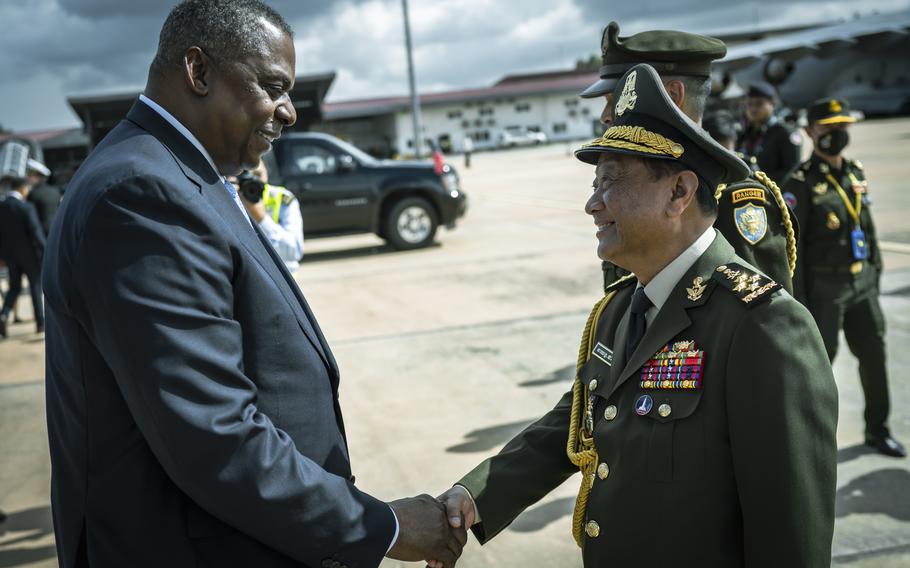 On the final step of his six-day, three-nation foreign trip, Secretary of Defense Lloyd Austin said Wednesday that the world must have rules-based order if it wants international security during a time of heightened conflict.

Austin made the remarks while he was on his way back to the United States after the conclusion of the Association of Southeast Asian Nations defense ministers meeting in Cambodia.

Cambodia was the Pentagon chief’s third and final stop on a trip that also took him to Canada and Indonesia and included meetings with his counterparts about security strategies in Europe and the Indo-Pacific.

Austin noted that Russia’s war in Ukraine has only underscored the importance of rules-based order — and shown just “how much countries around the world value and respect” it.

After Russia invaded Ukraine in February, most nations pledged support for Kyiv and condemned Moscow. Some countries punished Russia and its President Vladimir Putin with crippling economic sanctions — even famously neutral Switzerland.

“It is a risk that they accept,” Austin said in his remarks Wednesday. “That’s how much they believe in the rules-based international order.”

Austin’s remarks came just hours before the U.S. pledged another $400 million aid package for Ukraine, the third round in that amount this month. The package includes weapons, equipment and hundreds of power generators to help Ukrainian forces through the cold winter, especially since Russia’s been targeting electrical infrastructure across the former Soviet republic.

The United States has authorized more than $19 billion in aid to Ukraine since the Russian invasion began Feb. 24.

Austin’s trip to Nova Scotia in Canada, Jakarta in Indonesia and Seam Reap in Cambodia was part of an effort by President Joe Biden’s administration to reinforce key alliances during a time of conflict in Eastern Europe. The stops in Indonesia and Cambodia were geared toward mutual interests in the Indo-Pacific, which is a region of increasing importance to the United States, particularly where Taiwan is involved.

In its National Defense Strategy last month, which laid out security goals and priorities of Biden’s administration, the Pentagon identified China as the top U.S. competitor and noted a number of concerns and potential threats in the Indo-Pacific, such as Beijing’s rising influence and its possible designs on Taiwan, which it considers a breakaway territory.

On Tuesday, Austin met with Chinese defense minister Wei Fenghe at the ASEAN summit and expressed concerns about “increasingly dangerous” Chinese military behavior in the Indo-Pacific.