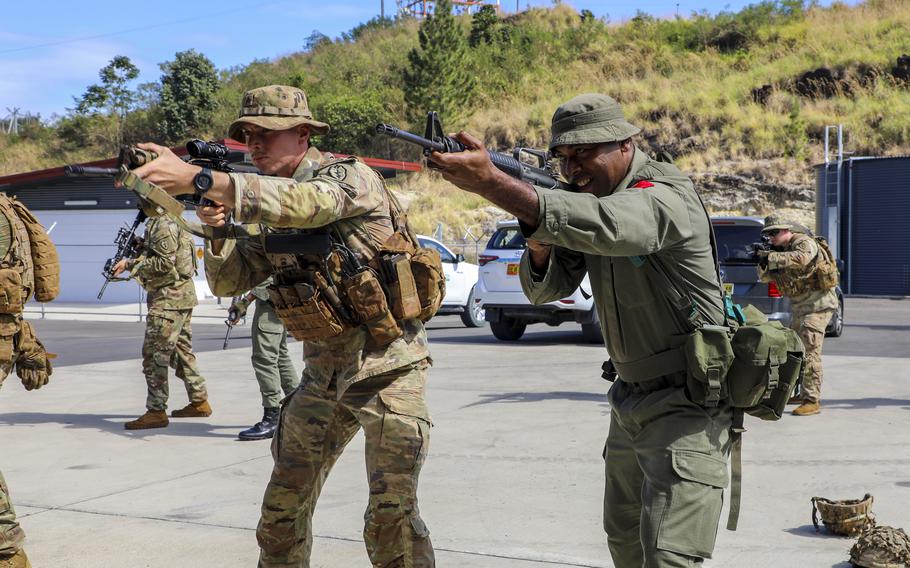 A U.S. Army soldier, left, and a member of the Republic of Fiji military forces look down their rifle sights as part of Exercise Cartwheel at Black Rock Camp, Fiji, September 13, 2022. A military exercise in Fiji involving the United States, Britain, Australia and New Zealand ends this week as the traditional allies counter China’s growing influence in the region. (Timothy Gray/U.S. Army)

CANBERRA, Australia — A military exercise in Fiji involving the United States, Britain, Australia and New Zealand ends this week as the traditional allies counter China's growing influence in the region.

The 11-day Exercise Cartwheel in Fiji began Sept. 12 and ends Friday, the U.S. Embassy in the Fijian capital Suva said Tuesday in an email.

U.S. Navy Commander Victor Lange said the name of the exercise originated from Operation Cartwheel during World War II, in which the U.S. fought alongside the militaries of Australia, New Zealand and Fiji — then a British colony — to neutralize the Japanese base at Rabaul in Papua New Guinea.

The United States has promised greater engagement with the South Pacific after China and Solomon Islands signed a bilateral security treaty in May that has raised fears of a Chinese naval base being established in the region.

U.S. Vice President Kamala Harris told a South Pacific leaders' summit in Suva in July that the United States would open new embassies in Tonga and Kiribati. She also flagged a tripling of U.S. funding for fisheries assistance to $60 million.

Australia's new government, elected in May, is also taking steps to increase its engagement with its island neighbors.

The government plans to establish an Australia-Pacific Defense School to train neighboring armies in response to China's potential military presence on the Solomon Islands.

Australians were reminded Tuesday of when World War II came to their shores when drivers found what appeared to be an unexploded bomb off the coast of the northern city of Darwin. Darwin became the first target of Japanese bombers on the Australian mainland in a devastating air raid on Feb. 19, 1942.

A 820-foot exclusion zone has been established in Darwin Harbor until the Defense Department removes the suspected bomb, Australian Broadcasting Corp. reported.