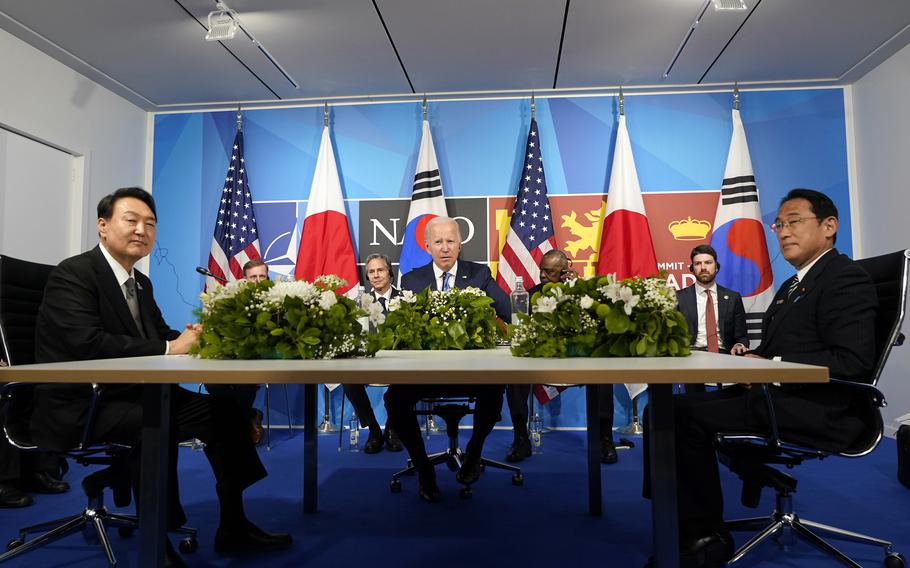 SEOUL, South Korea — The leaders of South Korea and Japan will meet next week on the sidelines of the U.N. General Assembly in New York, Seoul officials said Thursday, in what would be the countries' first summit in nearly three years amid tensions over history.

But in an indication of the continuing delicate nature of bilateral ties, Japan denied later Thursday that any agreement on talks had been reached.

An official in South Korean President Yoon Suk Yeol's office said the two sides had agreed on a meeting between Yoon and Japanese Prime Minister Fumio Kishida and were discussing the exact timing.

Kim Tae-hyo, a deputy national security director for Yoon, told reporters that the meeting is one of a series that Yoon is pushing to hold with world leaders attending the U.N. General Assembly on Tuesday and Wednesday. He said South Korea and the U.S. have also agreed on a meeting between Yoon and President Joe Biden.

However, in response to a question from The Associated Press about the South Korean announcement, the Japanese Prime Minister's Office said "there is no such fact."

Japanese Chief Cabinet Secretary Hirokazu Matsuno said details of Kishida's schedule in New York have not been determined. He added, however, that Japan wants to cooperate closely with South Korea to restore healthy relations.

Japanese officials may have been unhappy over South Korea's unilateral announcement of a meeting, with details likely still under discussion. It remained unclear whether Yoon and Kishida would meet next week.

Ties between South Korea and Japan, both key U.S. allies, are at their lowest point in decades after South Korean courts ruled in 2018 that two Japanese companies — Nippon Steel and Mitsubishi Heavy Industries — must compensate former Korean employees for forced labor during Japan's 1910-45 colonial rule of the Korean Peninsula. The companies and the Japanese government have refused to comply with the rulings, arguing that all compensation issues were resolved under a 1965 treaty that normalized ties between the countries and included a payment of $500 million from Japan to South Korea.

The history disputes have spilled over to other areas, with the two countries downgrading each other's trade status and Seoul threatening to scrap an intelligence-sharing agreement. The wrangling has complicated a U.S.-led attempt to solidify its alliances with its regional partners amid growing Chinese influence and North Korean nuclear threats.

Seoul and Tokyo have been looking to mend their strained ties since the May inauguration of Yoon, a conservative who wants to improve relations with Japan and bolster trilateral Seoul-Tokyo-Washington security cooperation to better cope with the increasing North Korean threats.

It's unclear if the Yoon-Kishida meeting would produce any immediate breakthrough because it's unlikely that some former Korean forced laborers and their support groups will accept a deal to settle their legal battles unless the Japanese companies consent to the court decisions.

"Given that the Japanese companies are dismissing the 2018 court rulings, I think it would be too unrealistic and naïve to think there are some other resolutions that can win the consent of the victims," said Lee Kook Un, head of a support group for some former laborers involved in lawsuits with Mitsubishi Heavy Industries.

The last talks between the leaders of South Korea and Japan occurred in December 2019, when then-South Korean President Moon Jae-in and Japanese Prime Minister Shinzo Abe met in China.