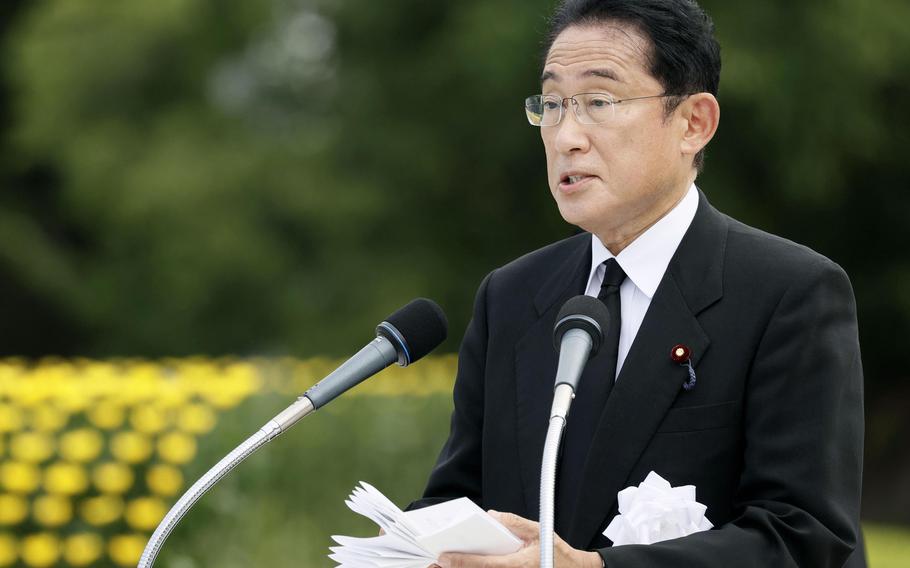 Japan’s Prime Minister Fumio Kishida delivers a speech during the ceremony marking the 77th anniversary of the Aug. 6 atomic bombing in the city, at the Hiroshima Peace Memorial Park in Hiroshima, western Japan Saturday, Aug. 6, 2022. (Kenzaburo Fukuhara/Kyodo News via AP)

TOKYO - Prime Minister Fumio Kishida, who is also president of the Liberal Democratic Party, has resolved to reshuffle his Cabinet and appoint new party executives this week, he said at a press conference in Hiroshima on Saturday. He is expected to make the new appointments on Wednesday.

In the Cabinet, Kishida is said to intend to keep Chief Cabinet Secretary Hirokazu Matsuno and Foreign Minister Yoshimasa Hayashi in their current posts, while in the party leadership, he will keep Vice President Taro Aso and Secretary General Toshimitsu Motegi in place.

Even so, sources close to Kishida speculated that the Cabinet reshuffle would be on a “large scale.”

Kishida is expected to replace Defense Minister Nobuo Kishi due to a health issue.

He will also replace two Cabinet members who had been in the House of Councillors until their terms recently ended; neither ran in this summer’s upper house election. They are National Public Safety Commission Chairperson Satoshi Ninoyu and Agriculture, Forestry and Fisheries Minister Genjiro Kaneko.

Coordination for the new personnel appointments has been underway for some time, with an eye toward carrying them out in early September. The plan had been to wait until after Aug. 25, which will be the culturally significant 49th day after the death of former Prime Minister Shinzo Abe, who was murdered on July 8.

However, in light of a resurgence of novel coronavirus infections and an increasingly tense situation surrounding Taiwan, Kishida has concluded that it would be necessary to make new arrangements at an early date, preparing for an extraordinary Diet session to be held in autumn.

As the approval ratings of the Kishida Cabinet have been declining in public opinion surveys by various news media, Kishida also apparently hopes that a personnel shake-up will lead to improvement on that front.

As apparent connections between some Cabinet members and the Family Federation for World Peace and Unification -- commonly known as the Unification Church -- have recently come to light, Kishida’s considerations in appointing his new lineup is drawing much attention.

Kishida had carried out earlier personnel appointments while considering the balance of power among LDP factions. At a press conference last month, Kishida said, “Faced with difficult challenges, we have to continue to cherish the solidarity of the party,” hinting at how members of the Abe faction, the largest in the party, would be treated in the upcoming shake-up of the Cabinet and the party leadership.