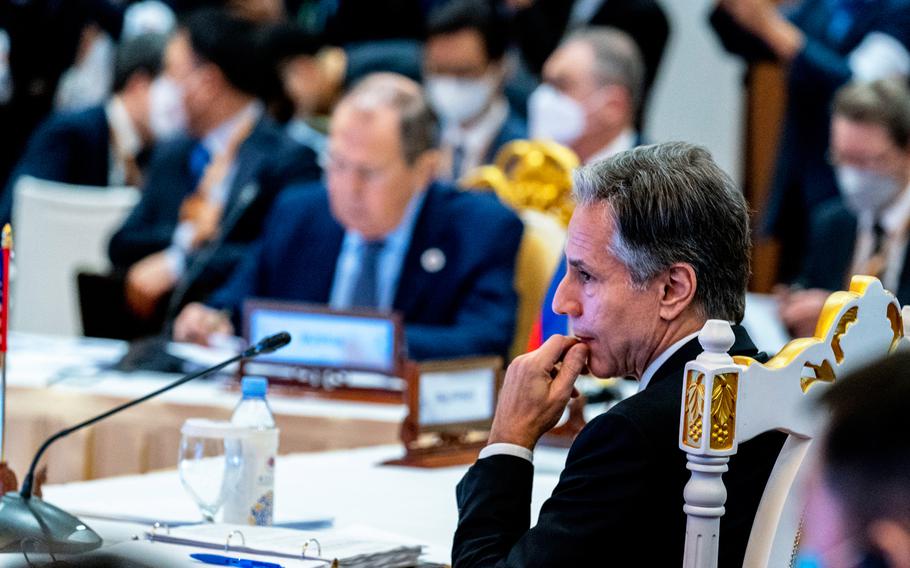 PHNOM PENH, Cambodia — U.S. Secretary of State Antony Blinken joined the foreign ministers of Russia and China at a meeting Friday with top diplomats from Southeast Asia that comes at a time of increased tensions between Washington, Moscow and Beijing.

The East Asia Summit of the ongoing Association of Southeast Asian Nations meetings in Cambodia's capital was the first time the three men were scheduled to take part in the same forum.

It came a day after WNBA star Brittney Griner was convicted of drug possession and sentenced to nine years in prison by Russia in a politically charged case amid ongoing friction over the Russian invasion of Ukraine.

China, meantime, is furious at the U.S. following House Speaker Nancy Pelosi's visit this week to Taiwan — a self-governing island Beijing claims as its own — and is in the middle of show-of-force military exercises in response.

Chinese Foreign Minister Wang Yi patted Russian Foreign Minister Sergey Lavrov on the shoulder as he entered the room and gave the already-seated Lavrov a quick wave before taking his own seat. Lavrov waved back in response.

Blinken, who entered the room last, did not even look over to Lavrov as he took his own seat about a half-dozen chairs away, or to Wang who was seated farther down the same table as Lavrov.

Ahead of the Phnom Penh talks, the U.S. State Department indicated Blinken had no plans to meet one-on-one with either man during the course of the meetings.

The East Asia Summit's chair, Cambodian Foreign Minister Prak Sokhonn, opened the 2 1/2 hour talks saying he hoped that all delegates would use the forum as a “means of engagement and communication” with one another.

“Every year we have our set of challenges to address but I have to say that never before, not like this year, have we been confronted with so many perils at the same time,” he said before ushering the media out to begin the closed-door talks.