SE Asia urges US, China to avoid provocation over Taiwan 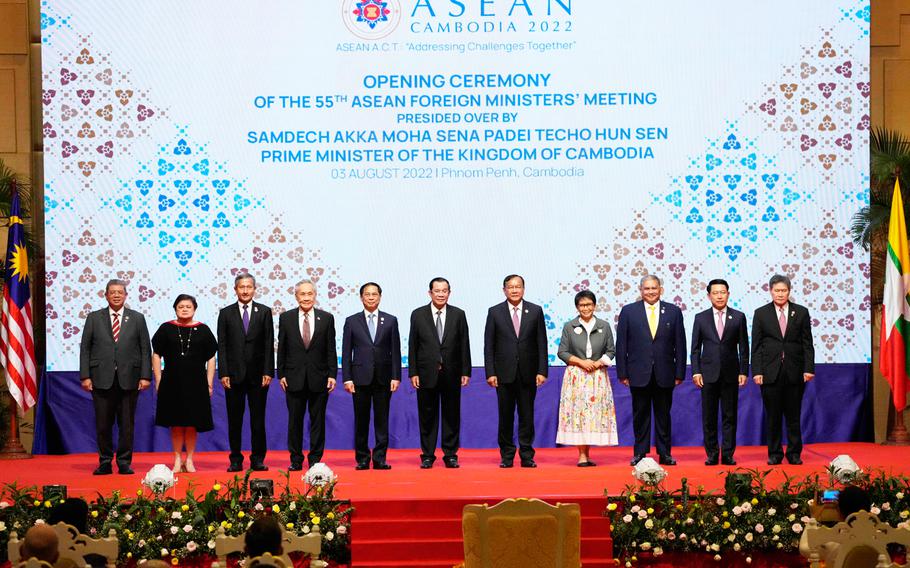 PHNOM PENH, Cambodia — The Association of Southeast Asian Nations is calling for calm in the Taiwan Strait, urging against any “provocative action” in the wake of a visit to Taipei by U.S. House Speaker Nancy Pelosi that has infuriated Beijing.

In a rare statement on such issues from the 10-nation group, some of whose members drift more toward China in allegiance and some toward the United States, ASEAN foreign ministers meeting in Phnom Penh, Cambodia said Thursday that they were concerned the situation could “destabilize the region and eventually could lead to miscalculation, serious confrontation, open conflicts and unpredictable consequences among major powers.”

Both U.S. Secretary of State Antony Blinken and Chinese Foreign Minister Wang Yi were taking part in the ongoing ASEAN meetings in Phnom Penh on Thursday and Friday.

Pelosi received a euphoric welcome as the first U.S. House speaker, and highest ranking U.S. official, to visit Taiwan in more than 25 years, and China swiftly responded by announcing multiple military exercises nearby.

China claims the self-governing island of Taiwan as its territory and opposes any engagement by Taiwanese officials with foreign governments.

Beijing has accused the U.S. of breaking the status quo with the Pelosi visit, while the U.S. insists there has been no change to its “one-China” position of recognizing the government in Beijing, while allowing for informal relations and defense ties with Taipei.

On the other side, with China's recent increase in military activities around Taiwan, Washington accuses Beijing of no longer accepting the status quo.

Meantime, the U.S. has an aircraft carrier group and other naval assets in the region.

In their statement, the ASEAN foreign ministers called for “maximum restraint” and for all sides to “refrain from provocative action.”

“The world is in dire need of wisdom and responsibility of all leaders to uphold multilateralism and partnership, cooperation, peaceful-coexistence and healthy competition for our shared goals of peace, stability, security and inclusive and sustainable development,” they said.

“We should act together and ASEAN stands ready to play a constructive role in facilitating peaceful dialogue between all parties including through utilizing ASEAN-led mechanisms to deescalate tension, to safeguard peace, security and development in our region.”

ASEAN is made up of Brunei, Cambodia, Indonesia, Laos, Malaysia, Myanmar, the Philippines, Singapore, Thailand and Vietnam.