US ambassador to Japan warns of Chinese economic coercion 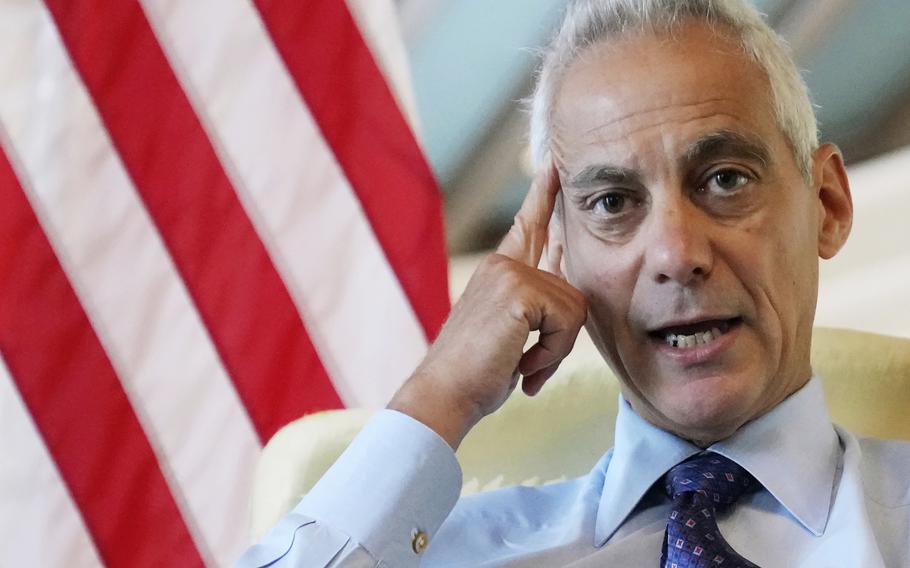 U.S. Ambassador to Japan Rahm Emanuel speaks during an interview with The Associated Press Tuesday, Aug. 2, 2022, at the ambassador’s residence in Tokyo. Emanuel says his government is working with Japan and other likeminded countries to counter Chinese attempts to use its economic might to force political change around the world. (Eugene Hoshiko/AP)

TOKYO — The United States is working with Japan and other likeminded countries to counter China's efforts to use its economic might to force political change around the world, the U.S. ambassador to Japan said Tuesday in an interview with The Associated Press.

Rahm Emanuel, who was previously mayor of Chicago and chief of staff for President Barack Obama, is pushing what he calls "commercial diplomacy," the idea that the United States and Japan will be more eager to do business with each other and with similar secure and stable countries amid worries caused by the COVID pandemic, the war in Ukraine and Chinese economic coercion.

"From intellectual property theft to coercion to debt dependency that China creates, the idea that they could actually honestly say, 'We don't coerce,' and then you have not one, not two, not three – many worldwide examples where they use their economic market access to force a political change in a country ... I think everybody's woken up to that," Emanuel told AP in an interview in his residence in the heart of downtown Tokyo.

Emanuel, who arrived in Japan in January, laid out a number of examples of Chinese coercion, including with Japan, which saw Chinese shipments of rare earth metals blocked over a territorial dispute; South Korea, which suffered Chinese business boycotts when it installed a U.S. missile defense system; Australia and countries in Europe and Southeast Asia.

He said that finding ways for Japan and the United States to stand up to Chinese economic coercion was one of the first issues he raised with Japan's foreign minister.

Emanuel repeatedly declined to speak about an expected visit by House Speaker Nancy Pelosi to Taiwan, the self-governing island that China claims as its own and has threatened to use force to unite with if necessary, referring questions to the White House.

China has in recent days lashed out at the possible trip, which would make Pelosi the highest-ranking elected U.S. official to visit in more than 25 years. Local media in Taiwan reported that Pelosi will arrive Tuesday night.

Japan has expressed deep worry about increased Chinese activities in regional seas, including near a Japanese-controlled island claimed by Beijing, and has pushed for peace and stability in the Taiwan Strait.

While avoiding comment on Taiwan, Emanuel praised Japanese Prime Minister Fumio Kishida's pledge for a "significant increase" in both the country's defense budget and its military capabilities.

Kishida's attempts to revise Japan's national security strategy and basic defense guidelines are a legacy of his hawkish mentor, former Prime Minister Shinzo Abe, who was assassinated in July.

Kishida has also said he is open to possible preemptive strike capabilities, which opponents say would go far beyond Japan's war-renouncing constitution, which restricts the use of force to self-defense. Kishida also has proposed significantly increasing Japan's defense budget — possibly doubling to 2% of GDP, a NATO standard — over the next five years.

"Much to the prime minister's credit, he looked around the corner and realized what was happening in this region and the world — Japan needed to step up in ways it hadn't in the past," Emanuel said.

The business leaders who he has met with as ambassador to Japan would have evaluated a capital expenditure decision in the past purely by questions over cost, logistics and efficiency, he said, but they are now willing to pay more to avoid sanctions and instability.

"That is a major change in thinking," he said.