UN chief going to Hiroshima for 77th anniversary of A-bomb 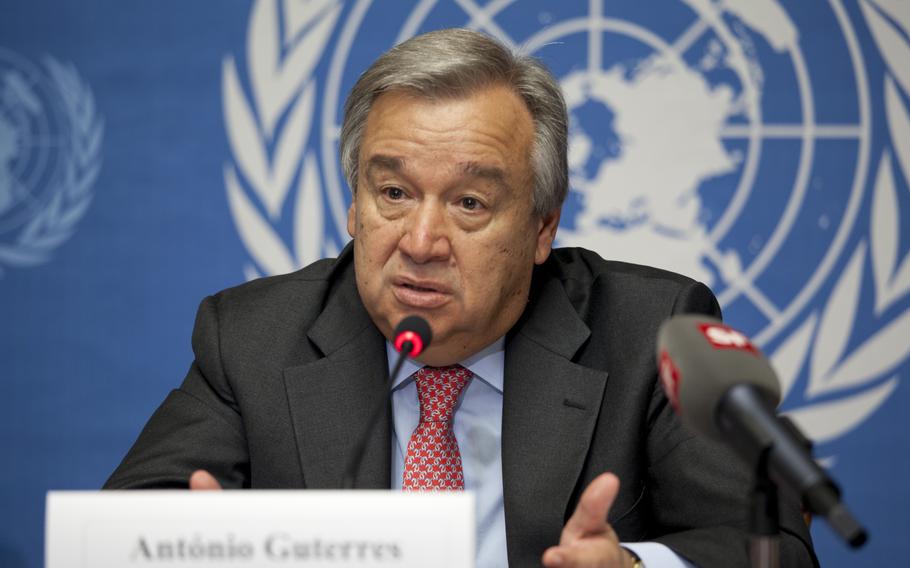 Antonio Guterres briefs international media in Geneva, Switzerland, August 3, 2012. Guterres announced Monday he will attend the 77th anniversary of the world’s first atomic bombing in Hiroshima, “at a time of nuclear danger not seen since the height of the Cold War.” (Eric Bridiers/U.S. Mission )

UNITED NATIONS — U.N. Secretary-General Antonio Guterres announced Monday he will attend the 77th anniversary of the world's first atomic bombing in Hiroshima, "at a time of nuclear danger not seen since the height of the Cold War."

The U.N. chief made the announcement in his speech on the opening day of the four-week meeting to review the landmark Nuclear Nonproliferation Treaty aimed at preventing the spread of nuclear weapons and achieving a nuclear-free world.

Guterres said his visit to Hiroshima for a few days is to underscore the importance of the conference. He said he will then visit two other countries in the region, which he didn't name, to promote nonproliferation.

U.N. spokesman Stephane Dujarric said the secretary-general will travel to Japan on Thursday and take part in the annual ceremony at the Hiroshima Peace Memorial on Saturday.

"The ceremony aims to console the souls of those lost to the atomic bombing, as well as pray for the realization of lasting world peace," Dujarric said. "The secretary-general will honor the victims of the bombings, commemorate all victims of WWII, and reiterate his call on world leaders to urgently eliminate stockpiles of nuclear weapons."

During his visit, Guterres will also meet with senior Japanese officials and surviving victims of the bombings and participate in a dialogue with young activists "leading initiatives on nuclear disarmament and nonproliferation and other global issues," Dujarric said.