Pelosi announces Asia trip itinerary with no mention of Taiwan 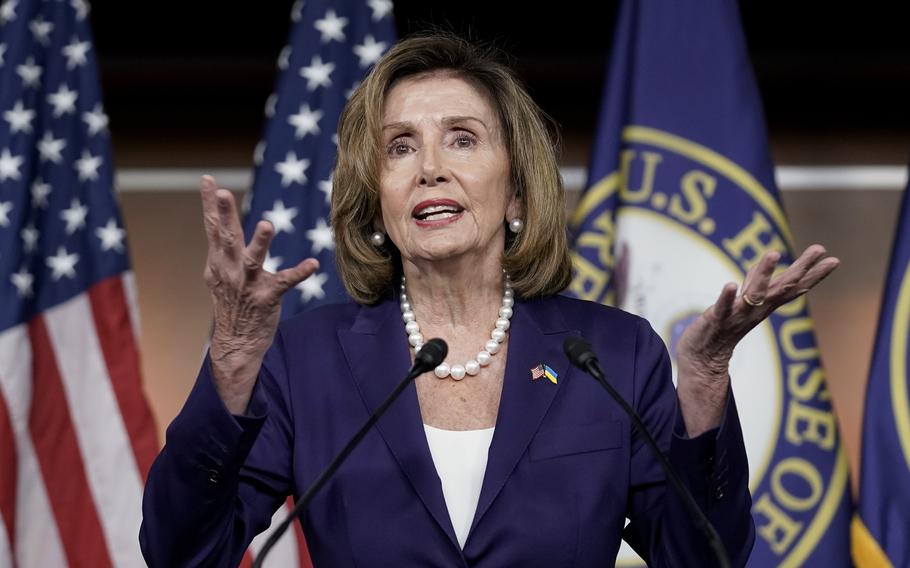 Speaker of the House Nancy Pelosi, D-Calif., speaks during a news conference Friday, July 29, 2022, at the Capitol in Washington. (J. Scott Applewhite/AP)

Rep. Nancy Pelosi’s office released an itinerary for the House Speaker’s planned trip to Asia that listed at least four stops — but made no mention of Taiwan.

Reports that the California Democrat was planning to visit the contested, self-ruled island that Beijing claims as its own had sparked anger and threats in China, where officials vowed to do what was necessary to “firmly safeguard national sovereignty and territorial integrity.”

Pelosi on Sunday set off for the Indo-Pacific, where she is leading a delegation of five Democratic lawmakers focused on “mutual security, economic partnership and democratic governance” in the region, according to a news release from her office.

The delegation will visit Singapore, Malaysia, South Korea and Japan, according to the release.

Ever since the Financial Times reported earlier this month that the American delegation would visit Taiwan, Pelosi has not confirmed whether she is going, citing security. A spokesperson for Pelosi could not immediately be reached for comment early Sunday.

Pelosi, 82, planned in April to visit Taiwan, but that trip was postponed after she tested positive for the coronavirus.

Joanne Ou, a spokesperson for Taiwan’s Ministry of Foreign Affairs, said she had “no further information to share with the media at this moment, nor have any comments on this matter.”

The White House has attempted to discourage the trip for fear that her trip to the island — which would be the first by a U.S. House speaker in 25 years — could provoke China and spark a crisis in the Taiwan Strait.

Chinese state media seized on Pelosi’s trip announcement, while continuing to reiterate a warning from its Ministry of Defense warning that the People’s Liberation Army would “not sit idly by” should she visit. The topic was trending on Weibo, the Chinese microblogging platform, Sunday afternoon local time.

State media on Sunday also quoted Shen Jinke, a spokesman for China’s air force, as saying that Beijing will “resolutely safeguard national sovereignty and territorial integrity” when it comes to Taiwan. Shen reportedly said China’s air force has a variety of fighter jets capable of circling “the precious island of our motherland,” per Reuters.

Pelosi and the visiting lawmakers stopped in Hawaii to refuel at the start of their trip, her office said. They received a briefing from military leaders of the United States Indo-Pacific Command, and visited the Pearl Harbor Memorial and the USS Arizona.

“In Singapore, Malaysia, South Korea and Japan, our delegation will hold high-level meetings to discuss how we can further advance our shared interests and values,” Pelosi said in a statement. The release said meeting topics would include trade, security, public health, climate change, human rights and democratic governance.

“Under the strong leadership of President Biden, America is firmly committed to smart, strategic engagement in the region, understanding that a free and flourishing Indo-Pacific is crucial to prosperity in our nation and around the globe,” Pelosi added.