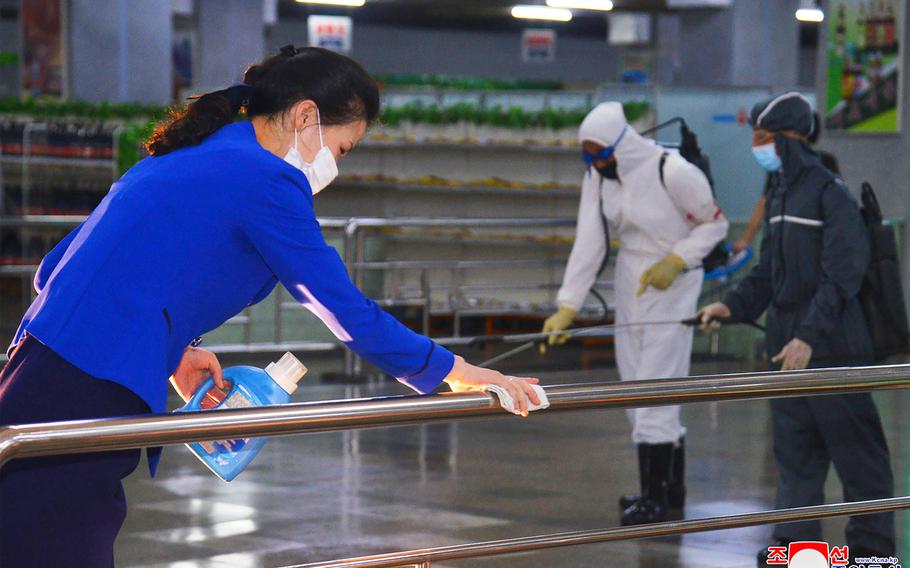 North Korean employees disinfect a facility at an underground store in Pyongyang, North Korea. Independent journalists were not given access to cover the event depicted in this image distributed by the North Korean government. (朝鮮通信社/AP)

SEOUL, South Korea — North Korea on Saturday reported no new fever cases for the first time since it abruptly admitted to its first domestic COVID-19 outbreak and placed its 26 million people under more draconian restrictions in May.

There have been widespread outside doubts about the accuracy of North Korean statistics as its reported fatalities are too low and its daily fever cases have been plummeting too fast recently. Some experts say North Korea has likely manipulated the scale of illness and deaths to help leader Kim Jong Un maintain absolute control amid mounting economic difficulties.

The North’s anti-epidemic center said via state media it had found zero fever patients in the latest 24-hour period, maintaining the country’s total caseload of about 4.8 million. Its death count remains at 74, with a mortality rate of 0.0016% that would be the world’s lowest if true.

Despite the claimed zero cases, it is unclear whether and how soon North Korea would formally declare victory over COVID-19 and lift pandemic-related curbs because experts say it could face a viral resurgence later this year like many other countries. North Korea’s state media has recently said it’s intensifying and upgrading its anti-epidemic systems to guard against coronavirus subvariants and other diseases like monkeypox that are occurring in other countries.

“The organizational power and unity unique to the society of (North Korea) is fully displayed in the struggle to bring forward a victory in the emergency anti-epidemic campaign,” the official Korean Central News Agency said Saturday.

North Korea’s claimed zero cases could have symbolic significance in its efforts to establish Kim’s image as a leader who has suppressed the outbreak much faster than other countries. Kim would need such credentials to garner greater public support to surmount economic hardships caused by pandemic-related border closings, U.N. sanctions and his own mismanagement, observers say.

“In North Korea, public healthcare and politics can’t be separated from each other, and that aspect has been revealed again in its COVID-19 outbreak,” said Ahn Kyung-su, head of DPRKHEALTH.ORG, a website focusing on health issues in North Korea. “Since they began with manipulated data, they’re now putting an end to the outbreak with manipulated data.”

North Korea had been widely expected to claim zero cases as its daily fever caseload has been nosediving in recent days — there were three reported cases on Friday and 11 on Thursday — from a peak of about 400,000 a day in May. The country, which lacks test kits, has identified only a fraction of its 4.8 million fever patients as confirmed COVID-19 cases.

“Realistically speaking, hundreds of thousands of daily fever cases becoming zero in less than three months is something impossible,” said Lee Yo Han, a professor at Ajou University Graduate School of Public Health in South Korea.

Many outside experts earlier worried the North’s outbreak would have devastating consequences because most of its people are believed to be unvaccinated and about 40% are reportedly undernourished. But now, activists and defectors with contacts in North Korea say they haven’t heard about anything like a humanitarian disaster happening in the North. They say the country’s outbreak has also likely peaked. 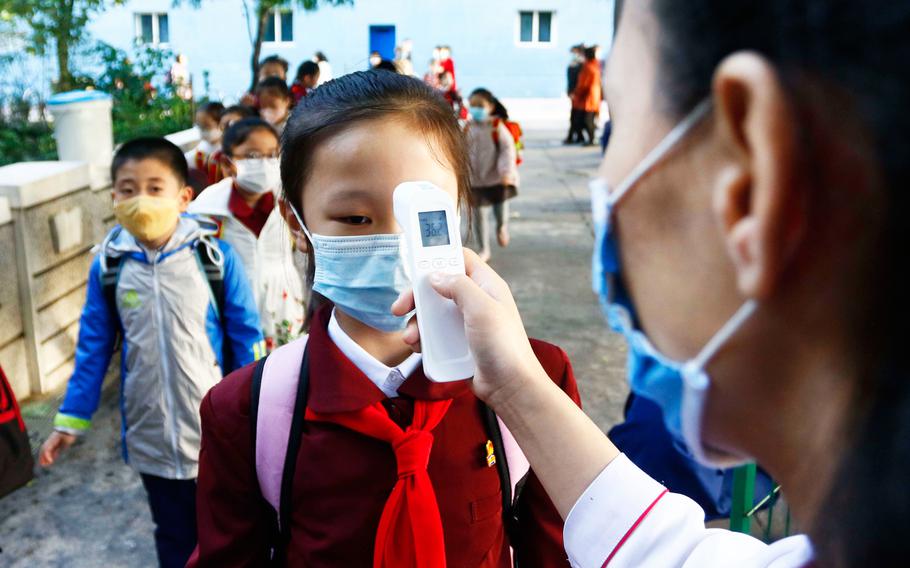 A teacher takes the body temperature of a schoolgirl to help curb the spread of the coronavirus before entering Kim Song Ju Primary School in Central District in Pyongyang, North Korea. (Cha Song Ho/AP)

In an indication of an easing outbreak, North Korea this week held massive no-mask public events in its capital, Pyongyang, where thousands of aged Korean War veterans and others gathered from across the country to celebrate the 69th anniversary of the end of the 1950-53 war. During an anniversary ceremony, Kim hugged and exchanged handshakes with some veterans before he took group photos with other participants. No one wore masks, according to state media photos.

Shin Young-jeon, a professor of preventive medicine at Seoul’s Hanyang University, said North Korea would know that zero cases don’t mean it has no COVID-19 patients because there are likely asymptomatic cases. He said North Korea won’t likely announce it has officially beaten the pandemic anytime soon because of worries about a resurgence.

“North Korea’s state media has already used expressions like it’s winning its anti-virus fight. The only other expression they can use now is declaring the coronavirus has been completely eliminated from its territory,” Shin said. “But if new cases emerge again, North Korea would lose its face.”

The only route for North Korea’s fresh viral spread from abroad is likely China, its main ally which shares a long, porous border with the country, and North Korea would likely find it difficult to announce victory over the pandemic until China does so, Lee said.

The North Korea-China border has been largely shut for more than 2 ½ years, except for a few months when it reopened earlier this year.

Some observers say the North’s elevated pandemic response has provided Kim with a tool to boost his authoritarian rule amid public complaints over long-running restrictions. They say North Korea could report a small number of fever cases again in the coming days.

Foreign experts struggle to assess the true number of fatalities in North Korea. They note the North’s shortage of test kits would also make it virtually impossible for the country to determine whether aged people or others with underlying diseases died of COVID-19 or something else.

Shin, the university professor, stood by his earlier study that predicted North Korea would likely suffer 100,000-150,000 deaths. He said he used South Korean data showing its mortality rate of unvaccinated people for the omicron variant, whose outbreak North Korea admitted in May, was 0.6%.

Other experts say the North’s fatalities would be several thousand at the maximum. They said bigger death tolls must have been detected by North Korea monitoring groups.