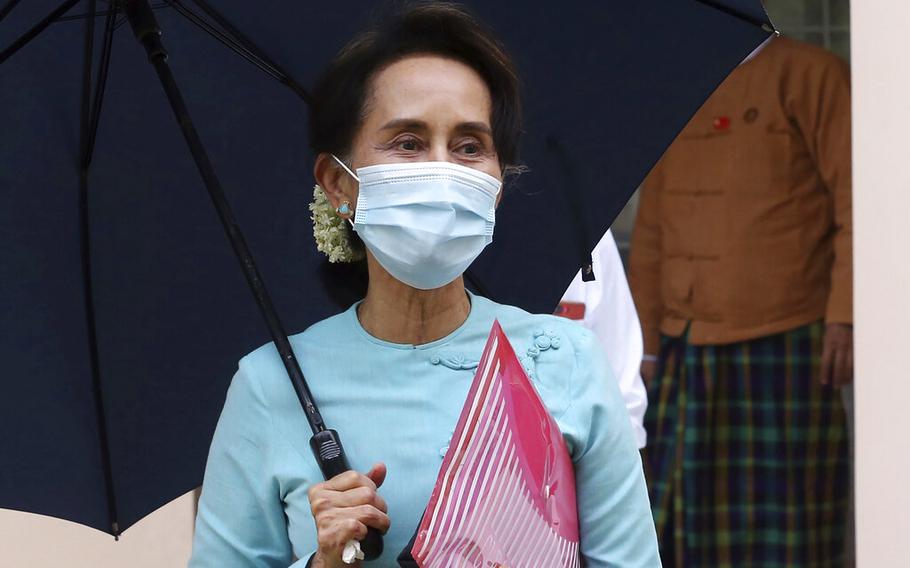 Then-Myanmar Leader Aung San Suu Kyi leaves a meeting in Naypyitaw, Myanmar on July 21, 2020. According to reports on Friday, July 15, 2022, Suu Kyi denied accusations of election fraud when she testified for the first time on the case at the prison court in the capital Naypyitaw. (AP)

BANGKOK — Ousted Myanmar leader Aung San Suu Kyi denied the accusations in an election fraud charge against her when she testified for the first time on the case Friday at the prison court in the capital Naypyitaw, a legal official said.

Suu Kyi's National League for Democracy party won that election in a landslide, while the military-backed Union Solidarity and Development Party did poorly.

A conviction in the election fraud case could lead to Suu Kyi's party being dissolved and unable to participate in a new election the military has promised will take place in 2023.

Suu Kyi has already been sentenced to 11 years in prison after being convicted on charges of illegally importing and possessing walkie-talkies, violating coronavirus restrictions, sedition and a corruption charge.

Suu Kyi's supporters and independent analysts say the charges are politically motivated and an attempt to discredit her and legitimize the military's seizure of power while keeping her from returning to politics.

Suu Kyi is being tried for multiple charges at a new facility constructed in the prison compound in the capital Naypyitaw, including the electoral fraud charge. She was transferred from a secret detention location to a custom-built solitary facility at a prison in Naypyitaw last month.

The penalty for the offense is three years' imprisonment. Former President Win Myint and former Union Government Office Minister Min Thu are co-defendants in the case.

The election fraud charge was filed in November by the state Election Commission, whose members were appointed by the military government. The military dismissed the commission's previous members, who had declared there were no major irregularities in the election.

The new commission accused the defendants, including its own former chairman, of being "involved in electoral processes, election fraud and lawless actions."

A legal official familiar with Friday's proceedings said Suu Kyi testified in the court that she did not go beyond the country's constitution in holding the 2020 general election, and did not influence the Union Election Commission in that election, before pleading not guilty. Further details of what she said were not available because of a gag order on her lawyers.

The legal official, who spoke on condition of anonymity because he is not authorized to release information, said Suu Kyi appeared to be in good health.

All of Suu Kyi's trials in the prison court are closed to the media and the public. The prosecutors do not comment on them and the state-controlled media have not reported directly on the proceedings. Suu Kyi's lawyers have been barred since last year from providing details of the trials under a gag order.

The judge adjourned the election fraud trial for next week, when co-defendant Min Thu will testify.

Win Myint, another co-defendant in the case, gave a courtroom testimony last week denying the accusations against him, the legal official said.

Suu Kyi is also being tried on a charge of violating the Official Secrets Act, which carries a maximum sentence of 14 years, and 11 counts under the Anti-Corruption Law, with each count punishable by up to 15 years in prison and a fine.

The corruption cases are among a large number of charges under which the military is prosecuting her. If found guilty of all the charges, she could be sentenced to more than 100 years in prison.

Her lawyers are trying to overturn the two counts under the Anti-Corruption Act in an appeal to the Supreme Court on technical grounds, saying the case should not have been filed. In this corruption case, she is accused of receiving $550,000 in bribes from Maung Weik, a construction magnate.

The army's takeover in 2021 was met with widespread non-violent protests. After security forces unleashed lethal force against peaceful demonstrators, some opponents of military rule turned to armed resistance in many areas.