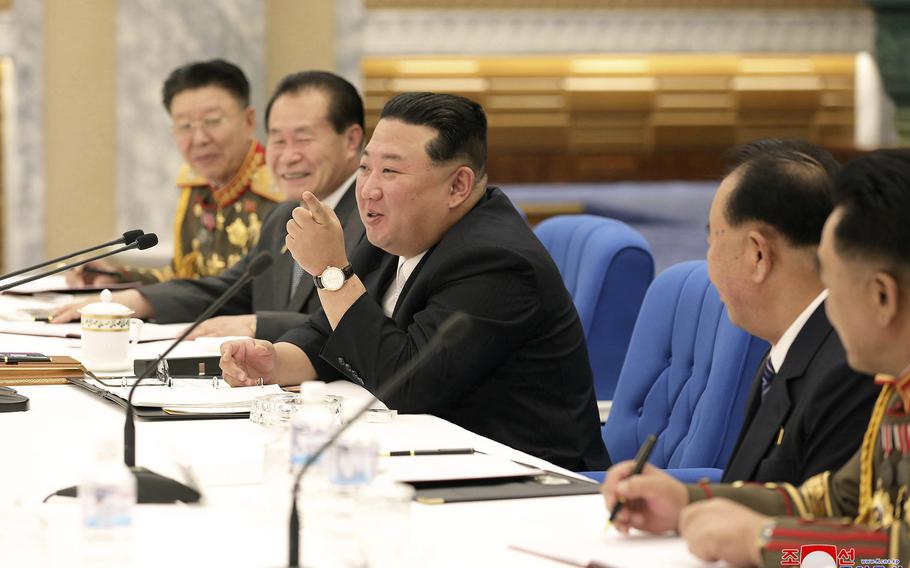 Pyongyang's official Korean Central News Agency said Wednesday that Kim presided over a meeting of the ruling Workers' Party's Central Military Commission that began Tuesday to review defense work during the first half of 2022 and confirm "crucial and urgent tasks" to expand military capabilities and implement key defense policies.

The report did not specify any plans or mention any critical remarks toward the United States or rival South Korea. U.S. and South Korean officials have said in recent months that the North could be preparing to conduct its first nuclear test explosion since 2017 as Kim escalates brinkmanship aimed at cementing the North's status as a nuclear power and negotiating economic and security concessions from a position of strength.

KCNA said the commission's members started discussing the agenda that was presented, indicating the meeting may continue for days.

The members could discuss the progress in weapons development and plans to deploy some of the systems that were tested in recent months, including a purported hypersonic missile, a long-range cruise missile and the North's newest intercontinental ballistic missile, said Cheong Seong-Chang, a senior analyst at South Korea's private Sejong Institute.

The meeting follows another major political conference earlier this month where Kim doubled down on his arms buildup in the face of what he described as an aggravating security environment and set forth further "militant tasks" to be pursued by his armed forces and military scientists.

North Korea has already set an annual record in ballistic launches through the first half of 2022, firing 31 missiles in over 18 different launch events, including its first demonstrations of ICBMs in nearly five years. South Korea's military also detected the North firing suspected artillery shells into sea last week.

Kim may up the ante soon as U.S. and South Korean officials say North Korea has all but finished preparations to detonate a nuclear device at its testing ground in the northeastern town of Punggye-ri. The site had been inactive since hosting the North's sixth nuclear test in September 2017, when it said it detonated a thermonuclear bomb designed for its ICBMs.

While the United States has said it would push for additional sanctions if North Korea conducts another nuclear test, the divisions between permanent members of the U.N. Security Council make the prospects for meaningful punitive measures unclear.

Russia and China this year vetoed U.S.-sponsored resolutions that would have increased sanctions, insisting Washington should focus on reviving dialogue.