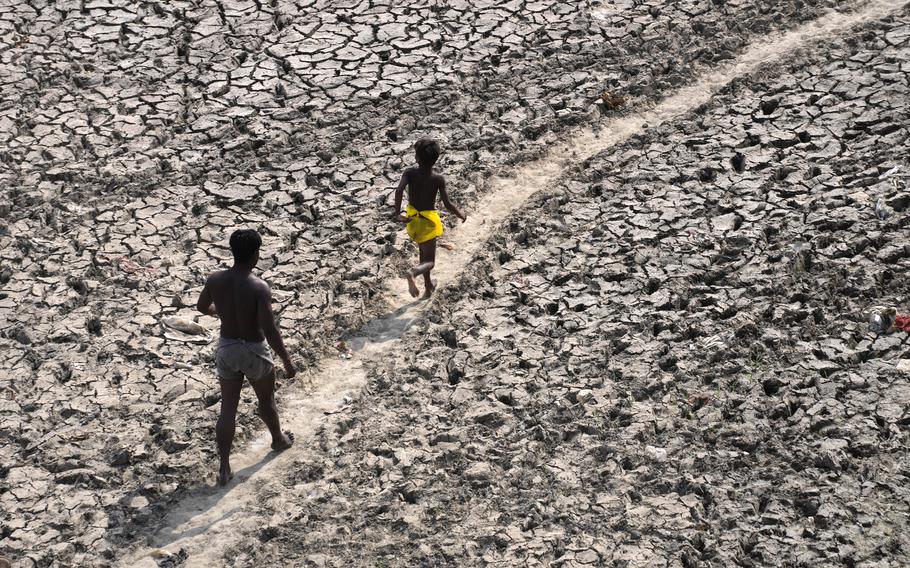 A man and a boy walk across an almost dried up bed of river Yamuna following hot weather in New Delhi, India, Monday, May 2, 2022. An unusually early and brutal heat wave is scorching parts of India, where acute power shortages are affecting millions as demand for electricity surges to record levels. (Manish Swarup/AP)

Supplies of coal at many thermal power plants are running perilously low, spawning daily power outages in several states. The shortages are sparking scrutiny of India's long reliance on coal, which produces 70% of the country's electricity.

The situation highlights India's pressing need to diversity its energy sources, as demand for electricity is expected to increase more than anywhere else in the world over the next 20 years as the densely populated country develops, according to the International Energy Agency.

The shortages hit as blisteringly high temperatures are sweeping over parts of the country, prompting authorities to close schools, sparking fires at gigantic landfills and shriveling crops as a cool spring turned suddenly into unrelenting heat.

India recorded its hottest March since 1901, and average temperatures in April in northern and central pockets of the country were the highest in 122 years, the Indian Meteorological Department said. Temperatures breached 113 degrees Fahrenheit in 10 cities last week, although cloudy skies and rain could bring some relief soon.

Climate change is making severe temperatures hotter and more frequent, with heat waves likely to strike India about once every four years instead of every five decades in the past, said Friederike Otto, a climate scientist at Imperial College London. India urgently needs to prepare for record increases in power consumption as a result.

Current power cuts are hurting economic activity, which had been rebounding after pandemic shutdowns, and could disrupt essential services such as hospitals, experts warn. Many states including Uttar Pradesh, Punjab, Haryana and Rajasthan are experiencing blackouts of up to seven hours.

On Friday, the railways ministry canceled more than 750 passenger train services to allow more freight trains to move coal from mines to the power plants.

Out of India's 165 coal plants, 94 are facing critically low coal supplies while 8 are not operational as of Sunday, according to data from the Central Electricity Authority. This means stocks have dropped below 25% of normal levels.

Government rules mandate that power plants maintain 24 days' worth of coal stocks, but many routinely don't, said Vibhuti Garg, an energy economist at the Institute for Energy Economics and Financial Analysis.

Much of India had a cool spring this year before temperatures rose quickly and dramatically. "Then suddenly the demand started picking up and the inventories started declining much, much faster than anticipated," Garg said. "And this becomes a kind of panic situation that they'll start running out of coal pretty soon."

But the power outages are less the result of a dearth of coal than inadequate forecasts of demand and plans for transporting it in time, experts said.

"We don't have enough resources to do proper forecasting. The hike in demand should not have come as a surprise," Garg said.

"There is enough coal, but a lack of anticipation and planning" caused problems, said Sunil Dahiya, an analyst at the Center for Research on Energy and Clean Air. "This could have been avoided."

Some of the shortfall could also have been met with imported coal, Garg said. But global prices have shot up since Russia's invasion of Ukraine, reaching $400 per ton in March, putting it out of reach for perennially cash-strapped power distribution companies.

Analysts expect demand to dip in the coming weeks, especially if the heat subsides, but it is likely to surge again in July and August, driven by rising humidity and the planting season in some Indian states. It is also the start of the monsoon, when heavy rains can flood coal mines and disrupt both mining and supply.

The freeing up of freight trains to transport coal is likely to ease the situation and provide some relief, but it isn't a long-term solution, experts said.

With climate change exacerbating heat waves, energy shortfalls will become more routine and demand will only rise further. But the answer is not to open new mines or add more coal to India's energy mix, because that will increase greenhouse gases that in turn will trap more heat, experts said.

"We need to aggressively focus on bolstering renewable energy and making it more reliable. Otherwise, the same issues will keep occurring, because we are too reliant on this one source of fuel," Dahiya said.

The Associated Press Health & Science Department receives support from the Howard Hughes Medical Institute's Department of Science Education. The AP is solely responsible for all content.