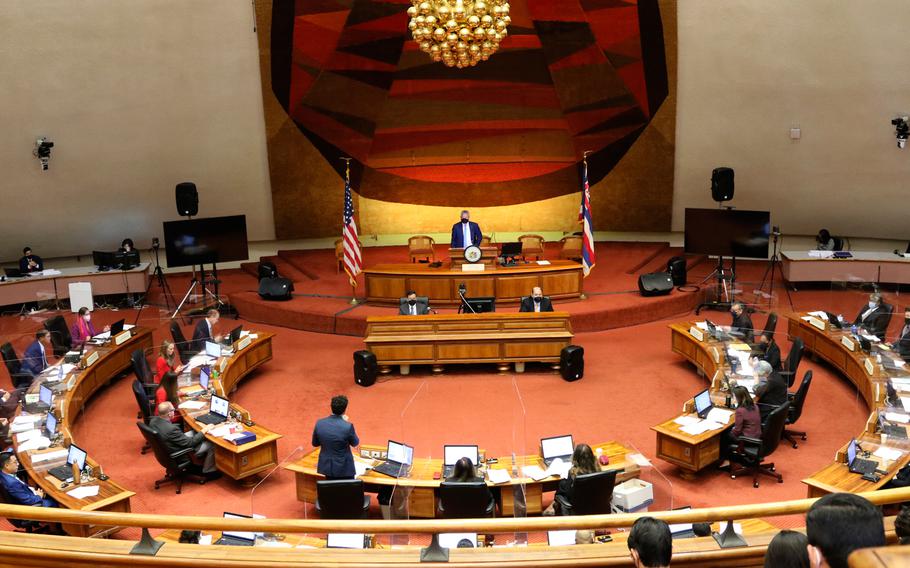 Members of the Hawaii House of Representatives discuss legislation at the Hawaii State Capitol in Honolulu, on Tuesday, May 3, 2022. Hawaii lawmakers have passed legislation that would hike the state's minimum wage to $18 an hour by 2028, potentially the highest in the nation. (Audrey McAvoy/AP)

HONOLULU — Hawaii lawmakers passed legislation Tuesday that would hike the state's minimum wage to $18 an hour by 2028, potentially the highest in the nation.

Advocates say the raise is badly needed in a state that routinely tops lists for most expensive housing and cost of living. But some businesses are warning they will have to cut staff or even close because they won't be able to afford the greater pay.

The $18 minimum would be the highest dollar amount among the 50 states and the District of Columbia. However, some states automatically boost their minimum wage when the cost of living increases, which means places like California, which currently has a $15 minimum wage, could have a higher wage in six years time given inflation.

The House and Senate, both controlled by Democrats, approved the measure by wide margins. The bill now goes to Hawaii Gov. David Ige, who has said he supports an $18 minimum wage.

Hawaii's minimum wage is currently $10.10 an hour. The bill would raise the rate in increments over the next several years, starting with $12 on Oct. 1.

House Speaker Scott Saiki said a study showing that 42% of Hawaii households struggle to make ends meet was a big factor behind his support for the increase. The Hawaii State AFL-CIO also endorsed going to $18.

Saiki said he wanted the minimum to rise in tandem with the consumer price index, but lawmakers didn’t reach a consensus on that.

A state analysis published in December showed a single person working 40 hours a week would need to earn $18 an hour to pay for housing and other necessities in Hawaii.

“People should be able to afford their basic needs on 40 hours a week,” said Nate Hix, the director of Living Wage Hawaii, an advocacy group that has been pushing for a higher minimum wage. “Otherwise people are forced to work multiple jobs or sacrifice their basic necessities like food, shelter, clothing.”

The Chamber of Commerce of Hawaii said in written testimony that many of its members say they will lay people off and some will close shop with the rate hike. The business group said Hawaii’s unique-in-the-nation requirement that employers provide health insurance to those working more than 20 hours a week already adds $3-4 to the hourly compensation of workers.

Michael Miller, the director of operations at Tiki’s Grill and Bar, a Waikiki restaurant, favors gradually hiking the rate to $15 by 2027. He said costs for everything involving labor will go up with the higher wage.

The legislation expands the tip credit to $1.50 by 2028, allowing employers to subtract that amount from the wage they pay if the workers earn enough in tips.

The bill makes the earned income tax credit permanent and refundable, which will help low- to moderate-income workers cut the taxes they owe and potentially increase their tax refund. Hawaii’s existing earned income tax credit expires this year and is not refundable, meaning many low-income taxpayers can’t use it because their earnings are too low to require significant taxes.

Gerard Dericks, an economics professor at Hawaii Pacific University, said raising the minimum wage to boost living standards focuses on the symptom of the problem and not the underlying cause.

He said it would be better for Hawaii to reduce its cost of living, for example by increasing housing by allowing the construction of taller and more numerous residential towers in Honolulu. Or by repealing the Jones Act, a 1920 law that requires shipping between U.S. ports to be handled by U.S.-flagged ships. Backers of the law say it’s important for national security because it helps maintain the U.S. shipbuilding industry.