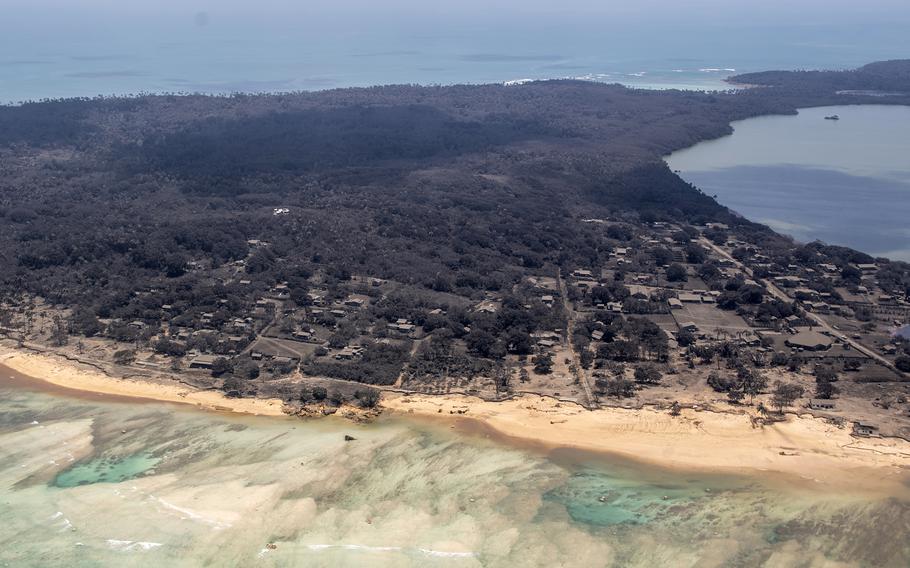 SYDNEY — When an underwater volcano erupted in the Pacific Ocean on Saturday with the force of 500 Hiroshima bombs, a massive mushroom cloud blanketed the nearby nation of Tonga in ash - and cut it off from the rest of the world.

At least three people were killed as tsunami waves of up 50 feet hit some islands. Now, as Tongans race to clear ash from airport runways and neighboring nations send much needed supplies, another operation is underway to address the hidden damage lurking below.

The volcano's blast severed the underwater fiber-optic cable that connects Tonga to the outside world, essentially plunging the nation of 105,000 people into digital darkness.

The severed cable has made it almost impossible to communicate with the archipelago and complicated efforts to assess the damage and supply fresh water to replace rain barrels contaminated with ash.

"It's a major disaster for us," said Samiuela Fonua, chairman of Tonga Cable Ltd, the partially state-owned company that operates the cable. And although a specialized ship capable of splicing the severed cable will be on its way in a matter of days, he said, it could be a few weeks before scientists are satisfied that the volcano no longer poses an imminent risk to the repair crew.

"We are looking at a month" before the cable is repaired, he estimated. "We need to get an all-clear that there is no more seismic activity around Tonga's waters. That will be the only factor that will determine how long [repairs take]. If everything will calm down next week, then luck will be on our side."

As the sulfuric cloud above Tonga began to dissipate this week, the nation's fortunes did appear to brighten.

Fears of mass casualties have given way to the daunting challenge of digging out from underneath the ash and keeping out covid, which Tonga has largely escaped.

Help is on the way, with two New Zealand ships heading to Tonga on Tuesday and an Australian ship expected to leave Brisbane on Wednesday.

It wasn't clear, however, if New Zealand and Australian troops would be allowed on Tongan soil. One Australian official compared the operation to contactless grocery deliveries to customers' doors during the pandemic.

While the severed fiber-optic cable means the Internet is out, some satellite phone reception has been restored in parts of the country.

The Red Cross said it had finally been able to contact its 10 employees in Tonga, who were safe but alarmed by the water situation.

"Red Cross teams on the ground have confirmed widespread stagnant pools of salt water that were dumped by the tsunami and communities are covered with a thick layer of volcanic ash, polluting the clean drinking water sources of tens of thousands of people," the International Federation of Red Cross and Red Crescent Societies said in a statement.

As the relief effort gathers pace, Fonua of the cable company said the repair will have to wait until New Zealand and Australian ships can assess the activity of the Hunga Tonga-Hunga Ha'apai volcano.

Tonga Cable Ltd., which co-owns the cable with private company Digicel, has identified two cuts caused by the volcanic eruption. One is in the 514-mile cable between Tonga and Fiji, roughly 23 miles off the coast of Tonga's main island. The other is in a fiber-optic cable running between two of Tonga's 36 inhabited islands.

Tonga has hired U.S. company SubCom to conduct the repairs, Fonua said. A specialized ship, CS Reliance, will leave Papua New Guinea this weekend and head to Samoa, where it will pick up supplies including fiber-optic cable. As soon as it receives assurances that it is safe, it will head to the damage sites.

The cut to the international cable happened in shallower waters and may have occurred when the tsunami wrapped the cable around a sharp coral reef, he said. The other cut occurred in deeper waters and might have taken place when the surge of water raked the cable over rocks on the bottom of the ocean.

Divers - assisted by miniature submarines in deep waters - will search the ocean floor for the severed ends of the cable, which is only about two-inches (5 cm) in diameter, Fonua said.

SubCom could not be reached for comment Wednesday. According to an online video, the company sometimes uses grapnels to snag severed fiber-optic cables and haul them to the surface, where the ends are spliced back together.

This is the second time in three years that the cable between Tonga and Fiji has snapped. In 2019, just a year after the cable was completed, an oil tanker severed it after forgetting to lift its anchor, Fonua said. The incident left the country without Internet for two weeks.

Fonua happened to be in New Zealand with his wife and children when the eruption occurred. But his 78-year-old mother is on Tonga's main island, not far from the airport that is now covered in ash. He hasn't spoken to her since the eruption.

"Tongans are quite anxious to talk to our people back home," he said.

If the volcano allows, the repairs could be completed in about two weeks, he said, but it was hard to predict.

"You don't rule anything out," he said. "A volcano will still be a volcano."